The creative team behind The Picture of Dorian Gray is back with a dazzling revival of a classic mystery. by Robert Louis Stevenson
Adapted and directed by Kip Williams

A classic mystery, a dazzling transformation

The award-winning creative team behind the sold-out smash hit The Picture of Dorian Gray returns with another vivid adaptation of a Gothic classic, transformed for the stage through engrossing live video. Written and directed by STC Artistic Director Kip Williams, this spellbinding adaptation of Robert Louis Stevenson’s mystery for the ages is set to be an unmissable production on the cutting edge of theatrical and cinematic design.

Penned by one of the English language’s greatest writers, Strange Case of Dr Jekyll and Mr Hyde follows London lawyer Gabriel Utterson as he attempts to unravel the mysteries surrounding his friend Dr Henry Jekyll and the shadowy new presence in his life: Mr Edward Hyde. One of the most gripping and intricate tales ever told, this chilling detective story has captivated artists and audiences alike for generations.

Two virtuosic actors – Matthew Backer (Cloud Nine, A Midsummer Night’s Dream, Chimerica) and Ewen Leslie (Julius Caesar, Rosencrantz and Guildenstern Are Dead, The War of the Roses) – will perform all the roles in the thrilling chronicle of the doomed and divided Jekyll, the rapacious Hyde, and the transfixed Utterson, caught in between, in a dazzling production that will blur the lines between good and bad, the self and the other, the public and the private, and the artist and the audience. 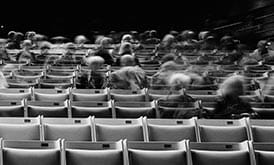