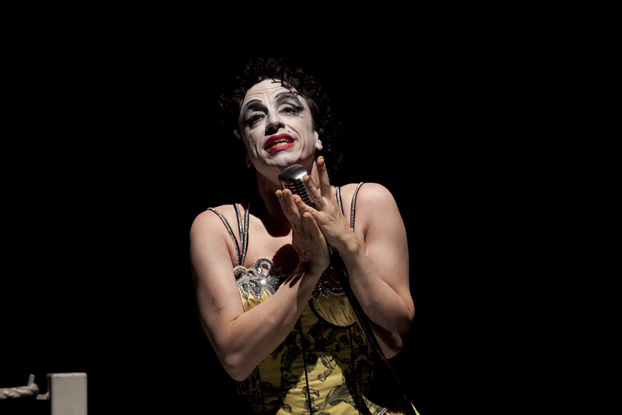 One could almost be forgiven for thinking that Bobby Darin wrote Mack the Knife. It would be an easy enough mistake to make. Darin made the murder ballad his own, as Louis Armstrong had done before him and as Nick Cave and Marianne Faithfull would go on to do, though the "murder" in his version had been watered down to "knock-about charm" and the "ballad" had been ramped up to "big band swing ". The lyrics were certainly more violent than they were in other such numbers on the American hit parade, though unless a person knew any better there was almost no reason to assume that there was more to the song that met the ear.

That Darin, recording Marc Blitzstein's 1954 translation of the song, should have adapted it to his own ends is hardly surprising. Since premiering in 1928, Brecht and Weill's The Threepenny Opera, of which Mack the Knifeis only the most recognisable number, has been translated into more than 115 languages and performed more than 10,000 times. It is likely that the only thing these productions have in common is how different each one has been from the last. The Threepenny Operais to theatre what Invasion of the Body Snatchersis to cinema: an urtext that can be reinterpreted time and again, iconic and mutable in equal measure, allowing the phantasms and preoccupations of the day to thrash themselves out in the light of its critique.

That critique is a Marxist one, with its roots in the factory and the union hall, and it is perhaps due to this thoroughly modern characteristic that we tend to overlook the fact that the piece is itself an interpretation. John Gay's The Beggar's Opera, written in 1728, is widely considered the world's first musical. But although it too has proved mutable over the years- Stephen Jeffrey's The Convict's Opera, produced by the STC in 2008, gave it a loosely antipodean bent-it took the unwavering moral outrage of early twentieth century radicalism to transform it into the garish indictment of the industrial age it now is. In The Shock of the New, Robert Hughes wrote that the meaningless slaughter of World War One "brought our culture into the age of mass-produced, industrialised death". For all the ring-a-ding-ding charm of the musical's most famous number, it is worth remembering that this is the age that Brecht was writing about too, with his emphasis on the unavoidable fact that those ordering the killing and those being killed were more often than not divided by class.

This sense of outrage is at its most evident in The Second Threepenny Finale, which remains the musical's most venomous song, as well as arguably its best. "What keeps mankind alive?" Macheath and Mrs Peachum snarl. "The fact that millions are daily tortured / Stifled, punished, silenced and oppressed / Mankind can keep alive thanks to its brilliance / In keeping its humanity repressed." Of the more recent recordings of this nasty little number, those of Tom Waits and William S. Burroughs, the latter of which is one of YouTube's hidden treasures, manage to retain this venom. The Pet Shops Boys' version, in unsurprising contrast, retains only the words.

This is an important point. Brecht's essential anger, and the unsettling charge it produces when teamed with Weill's knowing evocation of the beer hall and the cabaret, is worth keeping in mind when trawling through the performance and translation history of the work. This is especially true when English-language performances and translations are the ones you happen to be trawling through. Blitzstein's was an Off-Broadway success and won Lotte Lenya a Tony. (Lenya not only appeared in the German premier some twenty-six years earlier, but also happened to be the composer's wife.) But this same success was in large part due to the softening of Macheath's character, less anti-heroic than villainous in its German original, and the ironic but unsurprising toning down of the piece's attack on capitalism and its beneficiaries. This is exactly the sort of thing one has to be on the lookout for when dealing with anything that comes to us in translation.

Ralph Manheim and John Willett's 1976 attempt sought to correct this essential error, pulling the musical off the Great White Way and taking it back to the Weimar Republic, where artists such as Cave and Sting embraced it as a result. Privileging the tone of the original over word-for-word accuracy, Robert David MacDonald and Jeremy Sams followed suit in 1994, with their unapologetically dark translation for London's Donmar Warehouse.

There have been other notable translations since, such as Wallace Shawn's in 2006, and a world of foreign-language productions that is beyond the scope of this piece to address. But the general direction in which they have been moving-out of the light and into the darkness-is certainly a relevant one. We live in a time of Wall Street bailouts and massive lay-offs, a slap on the wrist and a bonus for the chief executive and crippling personal and household debt for the rest of us. Written in the wake of cataclysmic conflict, and on the eve of economic collapse, Macheath's famous question retains its bite. "Who is the greater criminal?" he asks. "He who robs a bank or he who founds one?"  What makes The Threepenny Operaso important is the manner in which it demands we keep asking.