On the morning of Monday 15 August at Horti Hall in Melbourne - the home of Victorian Opera - a talented group of people gathered. It was the first day of rehearsal for the return season of The Threepenny Opera, which will play at Sydney Theatre next month. Bringing together director Michael Kantor, conductor Richard Gill and a killer cast including Eddie Perfect, Paul Capsis, Amanda Muggleton, Luke Joselin and Lucy Maunder, it promises to be one of the nastiest pleasures of the Sydney theatre season this year.

Here, Richard Gill gives insight into the process of reconnecting with this masterpiece by Brecht and Weill: 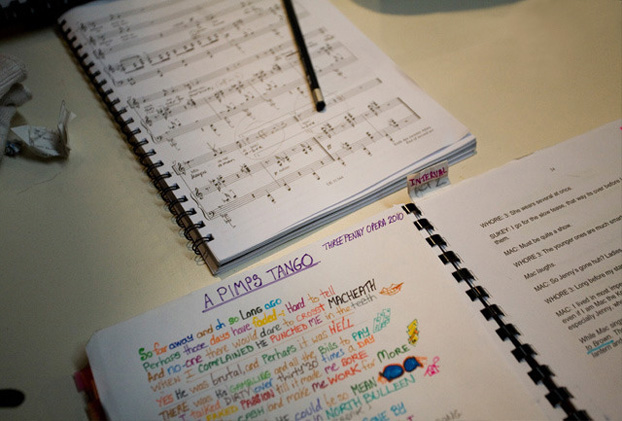 What a joy it is to be rehearsing this music again and working with a terrific cast! The music remains forever fresh and forever challenging. Kurt Weill is a genius in every sense of the word. His approach to melody and harmony is so highly original but never at the cost of musical integrity and never original for its own sake. The music has a universality along with a wonderful Jewishness I frequently associate with cafe music or schrammelmusik, that very special crying quality that comes with some of the folk music from Hungary, Moravia, certain parts of Austria and the like.

I often wonder how much really terrific music was lost because of the Nazis view of entartete Musik; their concept of debased art. Thinking of Jews makes me also think frequently of the cultural wars the murderous Nazis waged on Jewish life. That the Nazis, essentially murderers, criminals and terrorists of the first water, had any concept of music or art, one finds very hard to believe.

It is hard also to believe that a group of people so determined to wipe out a culture which they, the Nazis, believed was made up of groups of sub-humans entirely, had any concept of what constituted culture at all.

The Terezin prison camp,  the Jewish settlement in the then Czechoslovakia, comes to mind immediately as an example of the Nazis trying to persuade the world of their generosity towards the Jews and their humane treatment of them in this shocking pre-Auschwitz holding pen.  By doing this they tacitly admit they were not interested at all in the Jews but they felt they had to persuade the west that they were indeed very concerned about the ways in which they treated these people.

The Threepenny Opera, although not dealing with these themes directly, deals with life's unfairness, life's propensity to let one down, life's capacity to play tricks on one and the ultimate tragedy - life's a bitch and then you die. I dare say that there are many people out there who wouldn't know too much about this side of life. As Brecht says, obliquely through Raimondo Cortese, the librettist for this adaptation, "although it all works out happy in the end, it's actually not like that at all; look at the people you see in the street".

We do these works to remind ourselves of so many things and to realise that man's inhumanity to man is something which is always with us and thus has the capacity to teach us to appreciate those things which do go right in our lives, albeit occasionally.

Richard Gill is Music Director of Victorian Opera and Conductor of The Threepenny Opera.