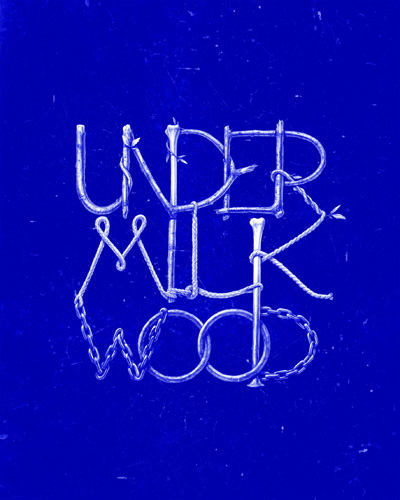 Under Milk Woodwas written in affirmation of the human spirit and the potential for beauty in the face of the atomic bomb. Set in a brilliant concoction of a Welsh seaside village, the poem rips the scabs of small town life with great vim and a bit much relish. It is a poem, conceived originally for radio - to be attended to and enjoyed predominantly in the ear (apologies to Iggy Pop) - but it has been staged a number of times because the vigour of the language and the punchy characterisations are stuffed to the brim with life. That's Life with a capital 'L' - fuelled mostly by sex: the hunt for it, the repression of it, the lack, the overabundance… the impossibility (quite literally) of life without it.

For an aspiring young writer, Dylan Thomas is one of the role models of the undiluted poet. The pure word-drisoul, barrelling through this joint on a wave of booze and verbal invention. Wild and free. This great sense of liberation and near disdain for society and the banal trappings of daily life finds great voice in this wonderful play.

Interestingly, though, it is also a play about repression and identity. About being an outsider or seeing the world from the outside. Nothing's as simple as it looks.

As if all that weren't enough, there is a mad paganism in the soul of the Celts, and the hills and dales of Wales are brimming with sprites and problematic natural drives. Perhaps it is on that tension that the play speaks most eloquently. The pagan and the civilised. The personal and the public. The Dionyssian and the Apollonian. Seemingly from a time that seems better, we bear witness to the confusion of urges that we all know so well, that remains unchanging in us all. That confusion that arises as we grapple with the world and strive to find our place in it. Community is great but it can also be a prison of petty expectations and impossible, unbreachable gaps between people who don't even like each other.

A machine for making sense of a world that is held together and torn apart by two impossible forces the inner and the outer. Should be a real rip-snorter.