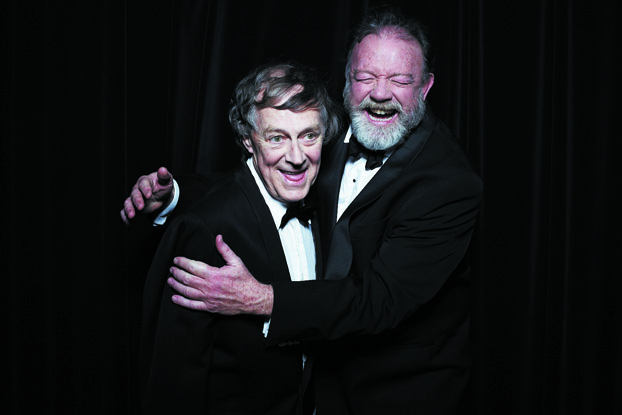 For a play like The Histrionicto work you need that confluence between a performer at a particular stage in their career and a certain text. This is a play I've known for quite some time but I've never thought that I'd like to see anyone particular in the lead role. It's such an extraordinary Olympic effort and it needed to just happen naturally. That was the biggest driver for me, working with Bille Brown up in Brisbane and realizing that not only was he was an actor with amazing skill he is also curious and brave enough to come down the Schlusser path as well.

It's an extraordinary monologue, he doesn't shut up and it dips in and out of tragedy and comedy, self-exploration and very funny egotism. It plays with all those registers and takes the audience through what is essentially an aria. It requires a very special performance.

It's a play about an actor and it's a play about theatre. It's about a family troupe setting up shop in a provincial little town in order to perform their tragic comedy The History of the World, which has been written by the lead actor Bruscon who has brought his family with him on an endless road trip. As they prepare for their one-off performance, things go progressively awry.

Bernhard really saw the world as a stage. There was a beautiful quote I read the other day, he said that if you can write a comedy on your deathbed then that's the ultimate achievement. He shares a kind of grimness with Beckett but he has a humour that is all his own. The Histrionicis really him, Bernhard, performing himself over and over again. He was a notorious trickster in life and had a sense of humour and a very Austrian sense of tomfoolery and black comedy All his works are first person monologue, like he's playing tennis with himself.

It's written without punctuation so it travels like a train without brakes, careers along without pause for breath or thought, and it's written in a way that really reflect the OCD mind that constantly makes a statement then revisits it, embellishes and distorts, puts in twists and plays variations on a theme. It's a fascinatingly realistic depiction of the way the human mind assesses and gravitates around the same preoccupations again and again, and Bernhard plays this for both tragic and comic effect. The voice is always the same across his novels and plays, it's kind of like the most judgmental person you know, not self-censoring at all, or yourself when you get into that judgmental mode. You end up with these monologues that are very circuitous. It's actually quite preposterous at the end of the day, which Bernhard realises.

The audience is not alienated per sé, but one of the metaphors that people use when they talk about Bernhard's writing is that he writes as if he's playing a sport. There's a net between the audience and the performer and it's a kind of tennis match of various degrees of seriousness. It makes the audience feel almost like we do when we see stand up comedy: he plays to his audience like the biggest ham you've ever met, but then the alertness of the audience is vital when he starts twisting and turning and undermining himself. The way in which he treats his family, monstering them, can be funny for a while but once you start to figure out the dynamics of his relationships, you realise they've been on the road for a long time. It's been a never-ending road trip and they're at the point where they're not speaking any more in the face of his barrage.

Bernhard really didn't like the German language, and often said as much. But he's Austrian, and the Austrians have a very strong tradition, like Australians, of being resourceful with language. Bernhard puns a lot, plays games with the Austrian equivalent of rhyming slang, uses all of his tricks to subvert the language and what you end up with is something that has musical structure and rhythm rather than meaning structures. There are intersections between the Austrians and Australians and one of them is this facility for verbal pyrotechnics and a kind of gallows humour.

There seems to be a very clear distinction between people who find The Histrionic really funny and mischievous and flirtatious, and there's another half who find it vicious and full of despair. I think it's important not to feel like it's some kind of existential doom play at all. Bernhard hides all of the seriousness underneath this comic mask and I think that's the main aim of the game. He copped a lot of flack for being too dark, but he always said that if he needed a good laugh he'd go back and read one of his own novels. Maybe the world is divided into the people who like or dislike that sort of Black Booksstyle comedy of misanthropy. "Like" is certainly the side I come down on!

This is an edited transcript of a verbal interview with Daniel Schlusser.