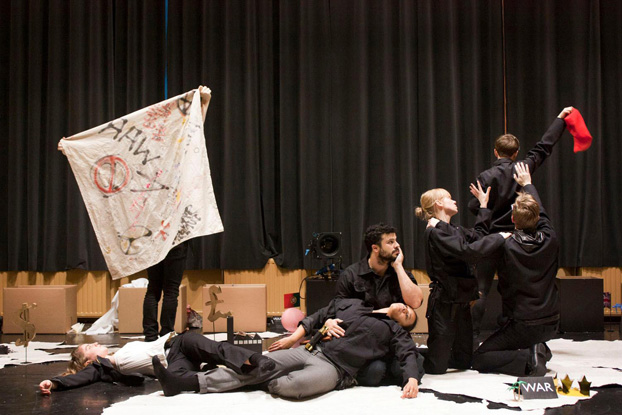 Well we've got one more month left of rehearsals to go. Last Friday we did a showing for close friends of the company (Ontererend Goed) of everything we'd worked on so far.

We also had a feedback session that was all in Dutch with every now and then some English translation. It felt like I was in a strange meeting at the UN, with equal amounts of passion but with the addition of Belgian beer. Tahki's learnt a lot of rude Dutch words and also the Belgian national anthem. We went to Antwerp for the weekend and discovered it's kind of normal to have champagne for breakfast, and on Sunday Cam and his family bought a little Christmas tree for their apartment.

In the rehearsal room we're back to working on part one (majority of human written history) and starting to work the camera and projector into the piece. Busy times ahead!

Ps: Writer and friend Duncan Graham (most recently wrote a piece for Money Shots, which was part of the 2011 STC Next Stage season) will probably be joining us for Christmas day! Yay!