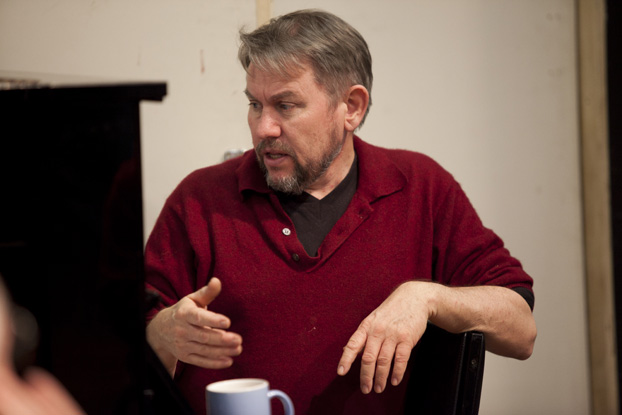 Describe your process for working on a new score.

Every show is different and so is the process.

Early responses to the script and discussions with the director are of course crucial. Some directors have very clear ideas about the kind of score they envisage while others are completely open to suggestion.

I remember when working with Peter Evans on Tony MacNamara's The Give and Take (a contemporary comedy) we both knew transition music was going to be very important to the production but neither of us had a clue as to style. Peter said there was something of the Italian opera about the level of passion in the play and I felt some of the writing had a classic 1950s American workplace comedy feel. Hmm.

Not a great deal of common ground there but I started fiddling around with some ideas that seemed to lead to a kind of mini-piano accordion-concerto with chamber string orchestra. Unlikely as it may seem, it fitted: it had pace, humour, a whiff of period sitcom about it and the fact that it had absolutely nothing to do with the milieu of the characters seemed to heighten the absurdity. Years later I watched Curb Your Enthusiasm for the first time and realized that they had made a very similar choice for probably the same reasons.

I used to work with pencil and paper (composing at the piano and orchestrating from what they call a "short score" – as did Wagner, Mahler and Stravinsky to name a few) and still do when writing opera or setting song lyrics. When having to work very quickly I write 'in my head' during rehearsals and scribble something down on the back page of the script. Plays with songs (especially by Shakespeare and Brecht) need carefully prepared scores in advance of rehearsals to facilitate the coaching of actors, who rarely have music reading skills.

Absorbing the production design concepts is also important. Set and costume designers often work from a collage-folio of 'references', and theatre composers should do the same - even if their set of references is different. If you go into rehearsals with some masterpiece that can't be touched, it's not going to be a happy experience for anyone. Composing for theatre is not about self-expression; it's about serving the play and the production. That's not to say it's all about pastiche, parody or near-plagiarism either (although they are all useful skills for sure). As with the designer's work, a distinctive voice can shine through elements influenced by period, ethnicity, class or character, and that voice is what can help unify a production. On a couple of projects I've been chuffed rather than miffed when cues of mine were mistaken for period recordings (tick the pastiche box) but felt that overall the scores transcended the references and were carefully tailored to the mood of each play.

What is the most challenging part of putting together a musical score?

Underscored dialogue. What is accepted and often subliminal in film music (where actors can work at intimate vocal levels and still be heard even over richly scored music cues) can seem obvious and melodramatic in the theatre. Film actors, of course, can't hear the score whereas real humans on stage can be 'thrown' by music that perhaps doesn't tally with how they (or their characters) feel the moment, or interferes with their pacing of the lines. On the other hand, a great underscore in the right kind of production can, without drawing attention to itself, act in a way analogous to a lighting cue: subtly guiding the audience's attention to a moment of text, or adding a new level of emotion – even one contrary to the prevailing mood of the scene – to a particular set of words. Sometimes the actor can use the underscore like a prop: riding it like a wave or waiting for a particular shift in the recorded cue to plant a certain word. When played live the actor and musician(s) can work hand in hand and then the music, like the spoken performance, will never be quite the same from show to show.

Far from a technique borrowed from film, musical accompaniment to dialogue goes back to the origins of drama as ritualised story telling. I particularly admire the way Shakespeare builds it into his plays (Orsino bids an offstage musician to "play the tune a while" while he has a gorgeously sensual exchange with the disguised Viola, and Prospero summons a "solemn aire" from the ether to make his reconciliation speech doubly moving).

Now that wireless amplification and spatial sound design has become more reliable and accepted in appropriate productions the way is paved for complex underscores on a large scale.

What is your favourite part of the process of composing a score?

I love song writing. There are an infinite number of possible settings for a finite set of lyrics but when you feel that you've nailed one – so that you will never be able to read those words again without hearing your melody – is very satisfying. The lyrics are the DNA, the song the living thing.

Who are your favourite composers for stage and/or film?

A lot of superb theatre music from the past is now not performable in its original context. Sibelius' massive score for The Tempest was written at the height of his creative life. It's fantastic to hear on CD or in a concert hall but would feel ludicrously overpowering in an actual theatre production today – even one with a budget and set that could accommodate a symphony orchestra.

In 1986, the Rustaveli Theatre Company from Georgia brought their Richard III and Caucasian Chalk Circle to the Adelaide Festival. Among their large entourage was the great Georgian composer Giya Kancheli, then largely unknown in the west. He conducted his brass band and percussion score for the Brecht with a large pit band, while his bizarrely eclectic recorded score for the Shakespeare involved loud and spectacularly vulgar electric guitar solos.

Both of them had a huge impact on me, and before the company got on the bus for the airport I embarrassingly thrust a cassette of a music theatre piece of mine – crudely recorded on a four track with me singing all the parts – into the composer's hand. He raced back into the hotel and returned bearing a highly decorated enameled wooden spoon (any implied symbolism was lost on me) and an unobtainable vinyl recording of his Symphonies No. 4 and 5. Listening to them I was thrilled to hear a beautiful passage that had caught my ear during Chalk Circle (so he recycles too!) and it made me think how little music from the theatre survives on recordings (it's a miniaturist art form in the main).

Kancheli is now a respected composer throughout the world; renowned for his monumental and meditative orchestral music but last year ECM released a charming collection of his theatre music arranged for bandoneon violin and vibraphone! It was so heartening to hear exquisite pieces from Hamlet or King Lear – of necessity tiny in scale but still charged with drama and deep emotion.

In film, Bernard Herrmann, of course, but also Alex North (I love scores from the 50s and 60s) and the under-rated and often unfairly reviled John Williams, whose stylistic range, gift for melody and orchestral imagination is dazzling.

How much music do you have to compose on average for, say, a show that runs for two hours?

It varies. Some shows require scene change cues only, and often this is not apparent until you are in the theatre so the music the audience hears is less than what was composed. Others are almost 'through-composed'.

On paper John Romeril's Jonah Jones [created for Sydney Theatre Company in 1985, with music by John] was neither musical nor opera nor 'play with songs' but it had fragments of lyrics on every page and choral refrains recurred often 20 pages apart. While it was my first foray into large scale music theatre, it remains one of the most difficult things I've done because it involved almost continuous music (some two and a half hours of it), with the actors having to treat large sections of dialogue as 'set'. A few safety vamps aside, they had a finite amount of time to complete the text before the next bit of singing – very hair-raising.

As far as normal plays go, 45 minutes of music for Bell Shakespeare's Winters Tale is probably my limit.

What is the mark of a good theatrical score?

It's hard to generalise. The truism has it that if the audience doesn't notice the music, you've done your job: it's unobtrusive and part of the whole. Sometimes, though, a bold and highly coloured approach is preferable (as in the Rustaveli example above).

Whether discreet or 'inyerface', a good score is one that demonstrates a genuine grappling with the text and subtext of a play. Its sound world (choice of instrumentation and harmonic language, or lack thereof in the case of some electronic scores) should somehow encapsulate the essence of the piece through a symbolic language, without stating the bleeding obvious or spoon feeding the audience or leaving them feel manipulated. Bold is fine, overstated is not.