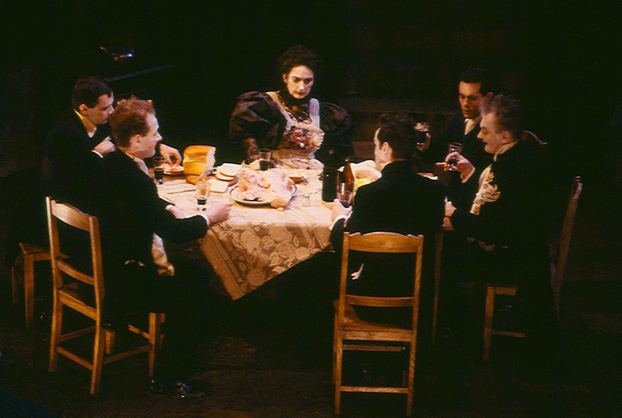 When a show is running at STC, the company receives a daily email from the Stage Manager in charge of the production giving details of the previous night's performance. The report outlines everything about the performance including props or costumes that misbehaved, the response of the audience and improvisations in the staging. The reports are designed to describe events during a performance so that relevant members of staff are aware of requirements or duties that need to be undertaken prior to the next performance.

For instance, if a piece of furniture breaks during the show, this is communicated via the Performance Report so that the Props Makers can repair it; if a patron is unwell, and has to be ushered out of the theatre, or if a mobile phone rings, effecting the concentration of the cast, it is explained in the report; if special effects are not working, the Lighting or Sound Department can be alerted to that fact.

Most of the time, things go as planned, but sometimes during a performance several unusual occurrences are experienced, allowing Stage Managers to give full rein to their descriptive powers: 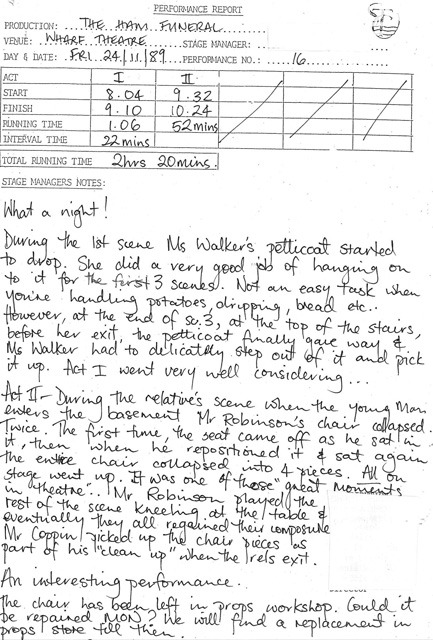 Due to STC's long term commitment to documenting all of the work that takes place within the company, thousands of performance reports are housed in the Archives, which were established 15 years ago and are looked after by our professional archivist Judith Seeff.

STC Archives aims to identify and preserve the significant records of the company and make (most of) them available to staff and the public for reference.

It is a veritable treasure trove of documents and photographs tracing back through the decades.

As soon as records created by departments including Production, Marketing and Casting have ceased to be used on a regular basis, they are deposited in Archives for evaluation.  If they are considered worthy of permanent preservation, they undergo processing, listing and storage in a purpose-built space. Records or information contained in documents can be located and used for the on-going operations of the company:  as evidence of statutory obligations satisfied, of conditions fulfilled, of transactions completed, of precedent, of ownership, to prove a point, to make a case, to check facts, to inform speeches, to mount an exhibition or to re-mount a production.