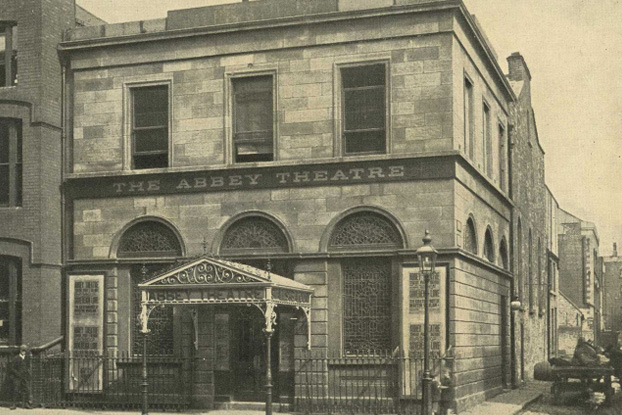 The Abbey Theatre (Amharclann na Mainistreach in Irish) was established in 1904 by a group of theatre enthusiasts that included William Butler Yeats and Lady Augusta Gregory. The pair were already involved with the Irish Literary Theatre (founded in 1899) and they hoped this new theatre would "bring upon the stage the deeper thoughts and emotions of Ireland".

With the help of entrepreneurial brothers William and Frank Fay, and young heiress Fredericka Horniman, they purchased rundown premises on Old Abbey Street, which they renovated and relaunched as the Abbey Theatre.The Abbey was successful from the start, attracting a working class audience in addition to the usual middle class theatregoers.

Controversial programming inspired audiences to protest on several occasions throughout the company's history, including during a performance of J. M. Synge's The Playboy of the Western World in 1907.

As is the case for most arts companies, finance has been an ongoing issue for the management of the Abbey, especially after Horniman withdrew her support in 1909. In 1925 the new Free State government began providing the company with an annual subsidy, making it the first theatre in the English speaking world to be state supported. Although relatively modest at 850 pounds, the grant was enough to allow creation of the Abbey Schools of Acting and Ballet, as well as a small experimental theatre called The Peacock.

The Abbey Theatre, which first toured a show internationally in 1911, was destroyed by fire in 1951 and the company moved to temporary digs at the Queen's Theatre where they stayed until July 1966, when the Abbey Theatre reopened on the original site.

In 2006 it was announced the company would move to a new, larger site on the Dublin dockands and an architecture competition was launched to find the design. The new venue will feature three theatres, rehearsal and education facilities, and a restaurant.