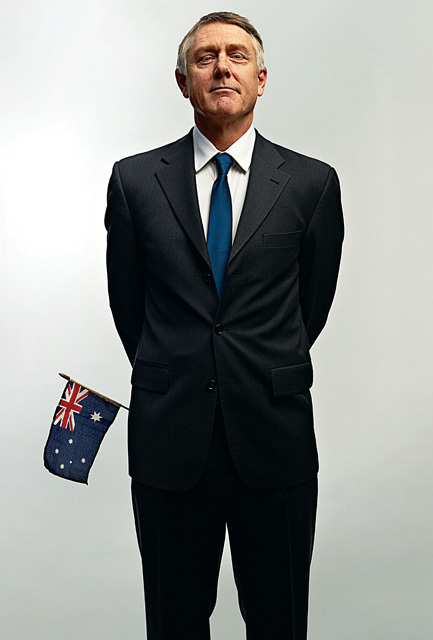 Australia Daywas inspired by my experiences as an Australia Day Ambassador, a programme run in NSW to send citizens with a public profile out into the community to help officiate at the regional celebrations of the national day and give a speech during the citizenship ceremony. I have no idea why they picked me - when I arrived for my first gig in Speers Point (just south of Newcastle) it was quickly apparent that no-one had a clue who I was. The local mayor and I did a circuit of the park where the festivities were held and the only consolation was that even fewer people knew who he was.

I'd always been a bit ambivalent about Australia Day, being of your inner-city, bleeding-heart leftie persuasion, so I was unprepared for the dedication and passion of the organising committees I met. Regional Australia is largely conservative and takes, shall we say, a traditional approach to matters of national identity. Perhaps not the ideal place to launch into a searing indictment of British colonialism and the fallacy of terra nulllis, even though we were encouraged to say whatever we wanted. But their engagement with the question of what the day actually meant was far more constructive than the commercial hijacking and nationalistic jingoism of the Sunriseversion of Australia Day, with Kochie in the Southern Cross barbecue apron cooking sausages in front of a sponsor's banner. At the grass roots, people have a lot more at stake as individuals. This is their community; they shape it at the micro level and it's not so easy to generalise, trivialise or dismiss their attitudes when you meet them on a personal level.

The citizenship ceremonies were surprisingly moving. These were people who were keen to become Australians - they appreciated the values and opportunities that we either sneer at or take for granted with the lip-service of platitudes. They saw a future, a chance to make a life here, whereas these days the community at large endlessly whinges about they haven't got or are in fear of losing. When did we become a nation of whingers? Why is there this disconnect between what the media relentlessly paints us as and the quiet effort and civility that I saw in the often thankless work the committees did to engender some sort of pride and gratitude in an increasingly graceless community?

I suspect it boils down to the dog-whistlers, those in political or commercial power who seize the advantage of playing to people's baser instincts, who foster the fear and confusion that drains people of goodwill and tolerance. And that's what I hope the play throws a little light on: the chasm between those who exploit a hollow notion of nationalism to jealously guard what they already have and those who try to define what it is to be Australian so they can share the gift with others and try to build a future we can only imagine.