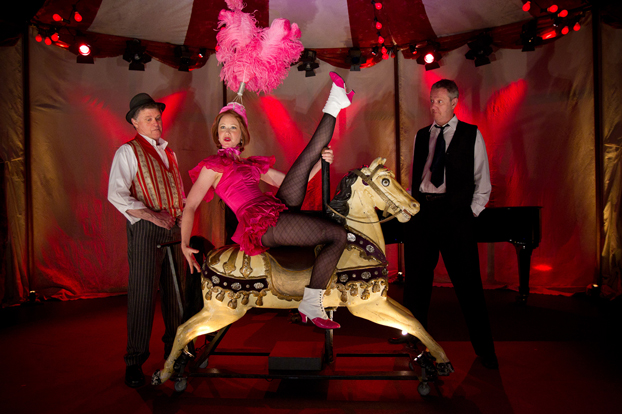 The songs are polished. The transitions are smooth. The jokes are practised. The caricatures are deftly drawn. Months of steady, detailed work goes into creating the well-oiled show that has become a Sydney institution.

It all began in 15 years ago, when Jonathan Biggins, Drew Forsythe and Phillip Scott banded together to create an all-singing, all-dancing variety show of sketches and mayhem. After years of honing the concept, the team have the routine down pat. They begin brainstorming concepts and coming up with possible sketches several months out from the start of rehearsals, although they have discovered that it is unwise to begin the process too early.

"We start actually writing the show only about two months before we begin rehearsals," says Scott. "Any earlier and it goes out of date too much. Then we work on it right up to the last minute and change things around in the rehearsal room. Then it's quite fluid, even when we're on the road [touring the show]. It's really a work in progress the whole time."

Each season the trio invite a female performer to join their troupe, and past honorary members of the revue have included Valerie Bader, Genevieve Lemon and Helen Dallimore. This year, they welcome back Amanda Bishop to play a range of characters including Julia Gillard, the character for which she has become famous.

"We don't usually discuss the show before we do the initial cold read [of the script at the first rehearsal]," says Bishop. "Sometimes they will mention what characters I might be playing, which is good for research. The process is so fun."

Once the four-week rehearsal period begins it is all systems go. Biggins, Forsythe and Scott all direct the show, with Scott doubling up as musical director, but they also take on the roles of set and costume designers with the help of the ever-enthusiastic STC production staff.

"We design the show ourselves, and sometimes we are designing it on the run so we can't praise the production departments at the STC enough," says Forsythe. "They've just been fantastic. They see us coming and say 'You're back again! What can we do this year? Who are we taking the piss out of this year?'"

One of the keys to the design of the show is functionality, as many of the set and costume changes have to happen at a brisk pace.

"We try to help each other where we can for quick changes," says Bishop. "There is a fair bit of 'underdressing' going on, where we are wearing the costume underneath for a sketch later on."

Frantic changes take place back stage, hidden from the audience's prying eyes, but the team insist this smoke and mirrors effect is essential to the show.

"A revue is like a duck swimming," says Biggins. "You don't see the furious paddling going on underneath. There are a lot of costume changes and the activity backstage is very frenetic because we try to keep it going as quickly as possible and we want to try to stay ahead of the audience."

After performing together in such intense circumstances for so many years, Biggins, Forsythe and Scott have come to know one another intimately, and to be aware of each other's strengths and weaknesses on stage, such as Scott's tendency to stress about the frequent, high speed costume changes required to pull of the show.

"I'm on stage a lot of the time playing the piano so I don't get a lot of time to make my changes," explains Scott. "I'm no good at making quick changes. I can't do up a button."

However, his two collaborators are having none of this, and Forsythe quickly chimes in to set the score straight.

"But he can play Flight of the Bumblebee at the drop of a hat," he says.

Since its humble beginnings, the revue has become increasingly political, and now focuses heavily on local, state and federal issues and politicians in Australia. This presents a challenge for the team, as much can (and does) change from the time they begin writing the show through the rehearsal period to the end of their touring schedule six months later.

This means they must be nimble with their ideas and ready to change sketches, cut ideas or write new material at any time, although they have come to realise that change is not always necessary.

"When you've done it for this long you realise that one of the odd things about political satire is that some things don't change at all," says Biggins. "There are issues we continue to talk about: global warming, boat people, the Middle East. Who've thought that 15 years after the Tampa we'd still be talking about boat people? This becomes a bit tedious because a week might be a long time in politics but sometimes 10 years is not. The difficulty becomes not to revisit these ideas if we've done them in the past. We have to find something else."

Scott agrees, and points out that keeping a close eye on the daily ebb and flow of politics is an essential, if often unrewarding, part of the job.

"Politicians make it much harder for us because they are much more focused on the day to day trivia than they used to be," says Scott.  "Issues used to have a few months of public credibility but now it's all about polls and everything changes every five minutes."