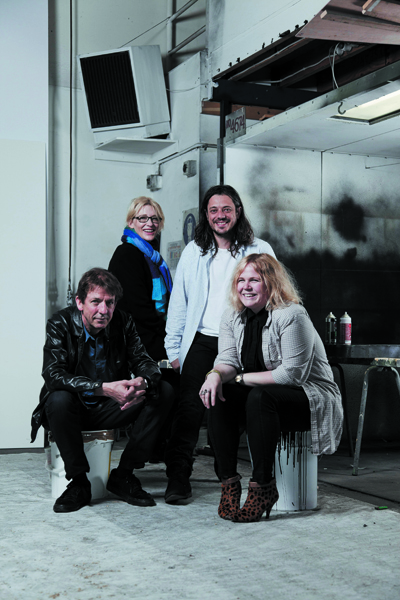 
Benedict Andrews was in Iceland taking a few months out from his hectic international directing career when Sydney Theatre Company called.

It was late August, about four weeks until the start of rehearsals for Gross und Klein (Big and Small) by German playwright Botho Strauss, and legendary Swiss director Luc Bondy had pulled out due to back problems. Would he take over?

"It took me a few days to make the decision," says Andrews at the end of the first week of rehearsals. "There were various things to find out and work out and discussions to be had with my partner (Magga, an Icelandic choreographer). She's coming out in a couple of weeks. I wouldn't have been able to say 'yes' if she couldn't have come as well."

The 39-year-old, Adelaide-born director sprung immediately to mind as the ideal replacement to helm the production, which tours next year to Britain, Austria, Germany and France.

One of Australia's most influential, groundbreaking stage directors, Benno - as he is affectionately known - has an international reputation for his bold, highly intelligent, uncompromising interpretations of the classics as well as his interest in radical new writing by the likes of German playwright Marius von Mayenburg and Britain's Martin Crimp and Caryl Churchill. He has had a long association with STC where he has directed many award-winning productions including Patrick White's The Season at Sarsaparilla staged in a revolving brick house in 2007, the epic, eight-hour The War of the Roses and Crimp's The City, both in 2009.

For Gross und Klein, STC is using a specially commissioned adaptation by Crimp - a writer Andrews admires and knows personally. What's more, he has been a regular guest with the Schaubühne am Lehniner Platz in Berlin and is knowledgeable about contemporary German playwriting.

It was lucky that Andrews was free.

"I'd given myself an unusual and exceptional break," he says. "I don't usually do that but I had deliberately given myself time between The Seagulln[which opened at Belvoir in June] and The Marriage of Figaro [which he directs for Opera Australia next February] to write and prepare as I have an intense rhythm after this."

He sure does: over the next 18 months he directs the Figaro, Every Breath at Belvoir in March - which he also wrote, marking his debut as a playwright - a contemporary German opera called Caligula for English National Opera, another London project yet to be announced, and Macbeth for the National Theatre of Iceland.

Two days after saying "yes", Andrews was on a flight to Washington, where STC's Uncle Vanya was playing, to meet with Cate Blanchett, who stars in Gross und Klein, and Crimp.

"Benno's involvement in this project in many ways seems like fate," says Blanchett. "Martin's adaptation, Johannes' design and indeed much of the casting could all have sprung from his imaginings. We are extremely fortunate to have him leading this production."

After a few days back in Reykjavik, he went to Berlin to meet with the production's German set designer Johannes Schütz, then dropped in on London to discuss various other projects, before flying to Sydney.

"Since being invited to do it, it's felt a little bit like going through the rabbit hole myself into another world," says the jetlagged Andrews with a laugh.

Being whisked down a rabbit hole and into a wonderland-like world is an analogy often used to describe the experience of Gross und Klein, which premiered in West Berlin in 1978 directed by Peter Stein.

The surreal play takes audiences on a dreamlike journey as we follow the lonely, ever-optimistic Lotte (Blanchett) through a series of strange encounters in which she tries unsuccessfully to connect with people.

"For me, it's an astonishing play," says Andrews, who first read it while studying drama at Flinders University. "I found it very exciting while I was at university and the play was very influential on my thinking then."

However, he admits he hasn't thought about Strauss a great deal since. "He's from the originating Schaubühne generation with Peter Stein and part of that movement. I've worked with a different generation of Schaubühne that's called 'the blood and sperm' generation - writers like Marius [von Mayenburg] and directors like Thomas Ostermeier.

"They define themselves as having a different agenda from the generation before them. I guess I've been thinking about German theatre more from that era so it's interesting to go back to this."

Andrews considers Gross und Klein Strauss' "great work. Partly because it was created in a very specific culture in this ideological war zone of what was Western Germany - a society under pressure, a fault line, an economic and cultural experiment - and maybe this play was what the Germans call 'theatre of a new sensibility'.

"It was very, very new this rootless figure [Lotte] in a world where values have been lost and a new modernity has come in quite fast. She's a very interesting figure because she's like an alien in her own land. In that way she's a relation of Agnes in Strindberg's A Dream Play or Alice [in Wonderland] or Dorothy [in The Wizard of Oz] - a child-woman wandering through a land where she is an alien. Therefore, she shows the land in a new way."

Andrews inherited the design team of Alice Babidge (costumes), with whom he has collaborated many times, and Schütz (set) with whom he hasn't worked before - though he has known of his work for some time and considers him "an astounding theatre designer".

A director with a strong visual imagination, Andrews says he shares Schütz's "minimalist and essentialist notion of the stage. He's come up with very beautiful, skeletal readings of each scene and it's a thrill to work with him".

Andrews is also delighted with the cast, which includes Robert Menzies, Anita Hegh and Belinda McClory, with whom he has worked previously.

"Also, it's an extraordinary role for Cate," he says, "and it's wonderful to work with her again after The War of the Roses where she was so astonishing, particularly as Richard II. But that was a massive production where I might meet her four times a week in the scheme of things. In this, she never really leaves the stage and to be able to have that much more intense dialogue with her is really interesting."

Andrews' relationship with STC goes back to 1999, towards the end of Wayne Harrison's tenure as artistic director, when he workshopped Marivaux's La Dispute, Crimp's Attempts on Her Life and Ur/faust for The Directory, which David Berthold ran as part of the artform development arm New Stages.

In 2000, newly appointed artistic director Robyn Nevin invited Andrews and Wesley Enoch to take over the programming for Wharf 2, which they called Blueprints.

Resident director with the company from 2000 to 2003, Andrews' first production was La Dispute, which played in Wharf 2 in 2000 as part of the main season.

"I was very involved in these different levels of the company while I was here, so I consider those extraordinary years for me," he says. "It was an extraordinary opportunity that Robyn gave me. I was producing a lot and maybe making some mistakes and learning a lot of things and she kept backing me when some audiences [were saying] "we don't want this".

"Actually I think there's been a massive cultural shift since that time. It was only 10 years ago, but when I did Three Sistersin 2001 it provoked a real reaction. Some people loved it but many people hated it. Robyn's support of me and directors like Barrie [Kosky] I think prepared a new ground for both the work I do now and for this next generation of younger directors - what Simon [Stone] is doing at Belvoir and so on. There really has been a new audience developed. I think people's expectations have changed and I feel very proud to have been part of that in some way - and a lot of that was to do with this hot-house time for me here at STC."