The program for our upcoming production Lootis full of information about the show including a note from our Artistic Directors about why they programmed it, information on Joe Orton's life and plays, cast bios, costumes sketches and a flashback to the STC production of Lootback in 1988 (starring Linda Cropper and Garry McDonald). We are particularly thrilled to include in the program an anecdote from director Richard Cottrell about his personal connection with Orton. It is a cracker of a story and we share it with you here... 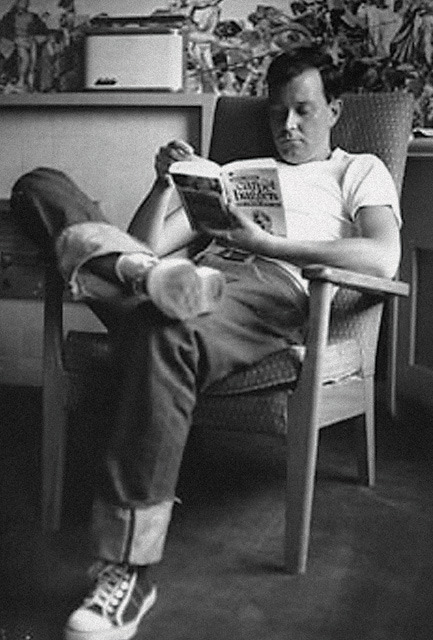 Joe Orton and I had the same literary agent - the famous Peggy Ramsay - and I met him and his partner, Kenneth Halliwell, a couple of times in Peggy's office.

One day in 1967 I had an early morning appointment with Peggy for which she was, very surprisingly, late. When she did arrive, she sent Tessa, her secretary, out for a bottle of brandy - even more surprising - and pointed me to her inner sanctum. When the brandy arrived, she poured herself a huge tot and said:

"I've had the most terrible morning imaginable. I've just got back from identifying the bodies of Joe and Ken. They've murdered each other."

At this early stage of the tragedy it had not been realised what had actually occurred: that Halliwell had bludgeoned Joe to death with a hammer and then taken an overdose of barbiturates.

"And," Peggy continued, "when the police weren't looking, see what I took."

From her capacious handbag she produced the Orton diaries.

I've always been positive that without Peggy's adroit sleight of hand these diaries, which Joe had begun at her suggestion and which contain so many of his thoughts about the art of theatre and of his own writing but also graphic accounts of his sexual exploits, would have been suppressed, either by the police or by the Orton family.

He was only 34 when he met his death. He had written five television plays and only three stage plays but it is incontestably in the mainstream of great British comedic writing, from the restoration writers of the late 17th century to Sheridan and Goldsmith in the late 18th, Shaw and Wilde in the late 19th and Coward in the last century. The line continues with Tom Stoppard.

His genius lies in putting lines that are worthy of Congreve into the mouths of the uneducated characters who people his plays and shock his audience into laughter.

This gives us, his interpreters, a huge challenge. Wish us luck, folks.

For more information about the show, pick up a program in the foyer for $10.