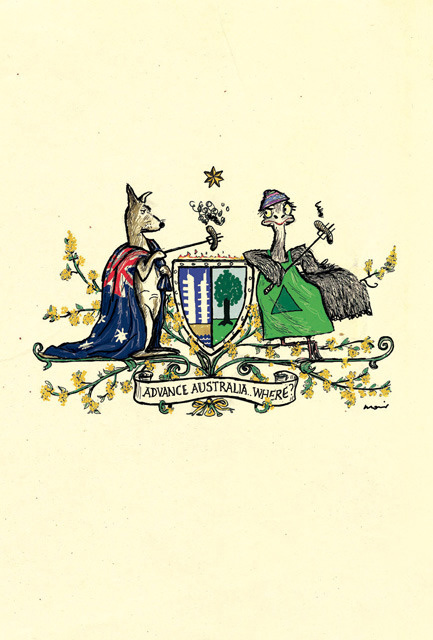 I said yes to directing Australia Daybecause it's very funny and because I think we're living in a period when political correctness has overwhelmed us. People are actually frightened to say what the think because the are scared of causing offence to somebody, and along with that goes a very large dose of humbug and I haven't got any time for any of that at all.

I think that politically I'm pretty close to where Jonathan is, which is just left of centre, I think you could say. I really quite hope that the play will offend quite a lot of people and make a lot of people laugh and the thing I hope most is that it will make people think and get people talking.

One of the most remarkable evenings I've experienced in the theatre was when Jonathan and I were in New York and we went to see Oleanna with a friend of mine, and we went out to dinner afterwards and for four hours we talked and argued about the play we had just seen. I call that pretty fucking thrilling, actually because I that's what I think the theatre can do and should do, and if you're arguing then your position might not be quite so entrenched as it was and you might even change our mind about something.

I think Australia Dayhas those potentials, and on reflection I find that potential more attractive than the comedic potential, which is absolutely fine and not a bad thing. Of course it's going to make people laugh when a character says "Oh, fuck, we're not going to have to wear a "Sorry" t-shirt are we?" People are going to laugh at that because a, you're not supposed to say that and b, it's what a lot of people actually think. I think it's a healthy mix and I don't think any of that should be downplayed in any way at all.

If on the first night there was booing and cheering, that would be wonderful…but you have to have both of them. I don't think it will happen, audiences now are too polite. There will be some people who like it and some people who don't like it at all because they will say that they don't believe such things should be said even if people believe them. But, I'm sorry, I can't buy that.

One of the things I find wonderfully ironic and enchanting about this play is that the only person in this play who finds Australia Day exciting is the Vietnamese-Australian boy and I think that's thrilling. Australia Day can get a bit tired and a bit of a chore but it can be worth doing if it thrills somebody. He's thrilled to be Australian, while the others don't really think about it except to want a number of other people not to be Australian.

Jonathan isn't frightened of anything. My initial reaction, when I read the script and was thinking about what would and wouldn't work, was laughter. I basically went for this play because it made me laugh and I do think the thing we forget at our peril is that the business we're in is the entertainment business. If we don't entertain then we're not going to be in business.