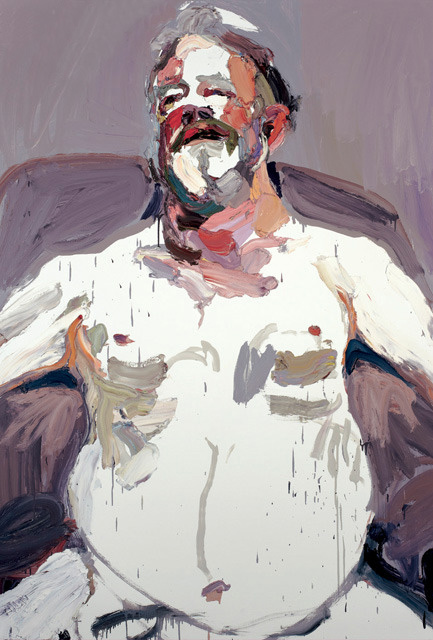 (Painting by Ben Quilty, for STC's The Histrionic, featuring Bille Brown. © the artist)

I can't stand actors. Actually I hate them, because as soon as they're in danger they side with the audience and betray the author. They utterly ally themselves with stupidity and feeble-mindedness. Actors destroy and annihalate imagination, they don't bring it to life. And they are the true gravediggers of literature.

Ever since Bernhard erupted onto European stages in 1968 he's been like a pebble in the shoe for the western theatre. He probably ponders exactly what the theatre is more deeply than anyone since Beckett; his plays have a relentless verbal energy that has great force. And not necessarily a force for good.

His work is about his own troubled, internecine, contradictory relationship with his homeland, a nation that somehow (to him) seemed to emerge from the horrors of the war pretending it had not been complicit, able to wallpaper over its past. His writing seeks to rip that wallpaper away with a sound like nails on a blackboard.

The Histrionic's title in German is der Theatermacher. It's effectively untranslatable; it means both someone who makes theatre a but also has all that association with hysteria, with being a drama queen, with making yourself the centre of your own tragedy. A histrionic in this case is both the creator and the destroyer. A histrionic concocts a universe then blows it up. For Bernhard it's as if the theatre, like Austria, is just untenable. And in that tension is a beautifully dark dark dark suite of plays.

I love The Histrionicand I have loved working on it. It's on occasions slapstick-hilarious, and a few seconds later you find yourself wryly smiling at his sad anger. On occasions the central character's monstrosity is exhausting but he's tempered with vulnerability and intelligence. It's really a great role to give one of our own larger-than-life theatremachers, Bille Brown. Years ago Bille was just gargantuan in a version of UbuI did for Belvoir. It's like an evil scientist has put a polymath's brain into a grizzly bear. Gee, he's a gem.

The Histrionicsets up the world as a problem. It's all set in a backward Austrian town, in the local hall, where Bille's character Bruscon is going to play his greatest work, a sort of sweeping survey of European history…but we never get to see the play, even though it sounds enticingly idiotic. We get Bruscon whinging about how bureaucrats won't let him turn the exit lights out so he can have a full blackout. We see him bully his own children, belittle his wife, snidely harangue his hosts, rant, cajole, exhaust himself, get kitschily sentimental, wallow in self-pity. He rails against provincialism, against national failure, against the vapidity of the young, the venality of the old, the tyranny of the past, the banality of the present.

And all the while I was working on the script I kept think the only difference between Bernhard's homeland and ours is two letters. I'm hoping such moments might occur in The Histrionic, where an audience member wonders to herself Did he just say Austria…or Australia?