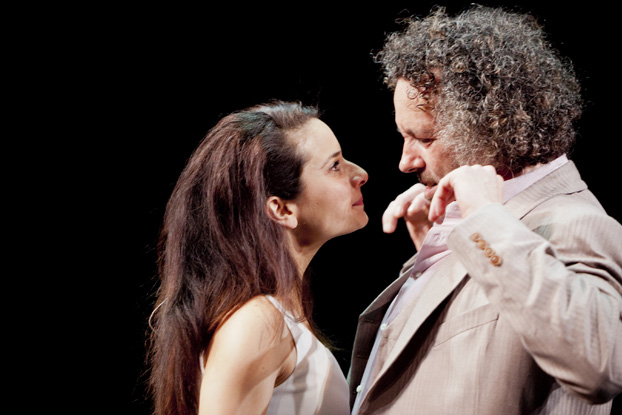 Ovid's Metamorphosestells of the sculptor Pygmalion, who "carved a statue out of snow-white ivory, / and gave to it exquisite beauty, which / no woman of the world has ever equalled: / she was so beautiful, he fell in love / with his creation." The story is an erotic fantasy, which stops at the awakening to life of the beautiful statue, and the fulfilment of Pygmalion's desire as he makes love to her. We hear nothing of what Galatea thought, or said, as she comes to life and finds herself in Pygmalion's arms. Interestingly, however, we do hear of Pygmalion's view of women that led to his making the statue: he "saw women waste their lives / in wretched shame, and critical of faults / which nature had so deeply planted, … he lived in preference, / for many years unmarried."

Shaw's Professor Henry Higgins, also a middle-aged bachelor, has a similar view of young women, or to be more precise, of their threat to the comfortable order of bachelordom:

There are already two women permanently in Higgins's life, his housekeeper Mrs Pearce, and his redoubtable mother Mrs Higgins. Mrs Pearce attends to his domestic needs, but also keeps a watchful eye on his eccentricities, attempting to stop him from the worst breaches of public decorum; as does his mother, who remarks that he is just a grown-up 'baby … playing with [his] live doll'. Both of these middle-aged and safely sexless women are instinctive feminists, though conventional in their social behaviour; they are no suffragettes, but they will not take nonsense from men. Indeed, as far as the play is concerned, such women rule the social, if not the political, world.

They are also firm supporters of the play's heroine, the lower-class flower-girl Eliza whom Higgins, Pygmalion-like, transforms into an elegant creature that he can "pass off as a duchess" - to win a bet and demonstrate his view of himself as a god-like artist. But Eliza is no Galatea: rather, she initiates her own transformation by coming to Higgins to purchase her means of social advancement, and she grows well beyond Higgins's plans. In the second half of the play, Shaw focuses on Eliza as an instrument of his arguments for revolutionary changes in society - changes that will recognise the right of all people, whatever their origin, their class, or their gender, to productively employ their talents and fulfil their potential.

Like so many young women of early twentieth-century literature, Eliza wants, not the pretty dresses and vapid conversation of ladies at upper-class garden parties, but the opportunity to work and make her own life.
It is only in her final scene with Higgins that she realises what that opportunity actually arises from - what she has learnt from Higgins:

"What a fool I was not to think of it before! You can't take away the knowledge you gave me. You said I had a finer ear than you. And I can be civil and kind to people, which is more than you can. Aha! That's done you, Henry Higgins, it has. Now I don't care that [snapping her fingers] for your bullying and your big talk. I'll advertise it in the papers that your duchess is only a flower girl that you taught, and that she'll teach anybody to be a duchess just the same in six months for a thousand guineas. Oh, when I think of myself crawling under your feet and being trampled on and called names, when all the time I had only to lift up my finger to be as good as you, I could just kick myself."

Higgins's response to this outburst is astonishing but revelatory. Significantly, it shares the vulgar energy of Eliza's language: "You damned impudent slut, you! But it's better than snivelling; better than fetching slippers and finding spectacles, isn't it?" - that is, better than women's conventional role as the silent 'helpmeet' for men, the role that Eliza had so naturally fallen into in Higgins's household.

Higgins/Pygmalion, in pursuing an "inspired folly", a bet based on his contempt for conventional society, has performed a greater transformation than he could have imagined: "By George, Eliza, I said I'd make a woman of you; and I have." In fact he said he'd make a "duchess" of her - it was Ovid's Pygmalion who made a woman, and with that, a fully adult sexual being. "I like you like this," Higgins concludes; something that he would never have allowed himself to feel earlier in the play.

Shaw, it would seem, was being deliberately provocative in naming his play after Ovid's erotic tale. He also subtitled the play 'A Romance', playing on the audience's expectations that the plot would revolve around an irresistible sexual attraction between apparent opposites - the classic material of romantic comedy. (The 1990 film Pretty Womanis a modern example of what the play's arc might have been.) Shaw's view is that the true modern 'romance' is that of Eliza's transformation through education, into one who can raise herself out of her oppressed social class and gender position and into a brave new world where she might achieve anything. "Such transfigurations have been achieved by hundreds of resolutely ambitious young women since Nell Gwynne set them the example by playing queens and fascinating kings in the theatre in which she began by selling oranges," wrote Shaw.

Actresses have always 'worked', and this involves a self-transformation away from the cultural norms of their gender.
Eliza is a huge role - one of many Shaw wrote for actresses such as 'Mrs Pat' Campbell (the first Eliza) and Sybil Thorndike (the first Saint Joan): he clearly valued such women's energy, drive, and performative power. Eliza, in the play, is a superb embodiment of these qualities, much more so than the more naive and sentimental heroine of Lerner and Loewe's 1956 musical  - though to do the authors justice, we should not forget that in My Fair LadyEliza has two great feminist anthems, Just you waitand Without you, to make up for much of the dialogue that had to be cut.

To cut any of Shaw's dialogue, though it may be unavoidable in today's less leisurely theatre, is to weaken the play's political argument. Access to the power of language is, as Shaw sees it, what will transform society. It can make a dustman a prosperous gentleman, as Alfred Doolittle demonstrates. It can make a street flower-seller a duchess; and even more importantly, it gives voice to the hitherto silent oppressed. The beginning of Act 4, when Eliza finally refuses to be silent and ignored after her triumphant performance at the embassy, and instead throws the slippers at Higgins and berates him, is a moment of great significance in Eliza's transformation. She is as eloquent here as she was in her first visit to Wimpole St to buy herself an education, but she now has the added advantage of the ruling class's dialect.

There is undeniably a strong current of attraction between Higgins and Eliza as he roughly teaches and moulds her talents into something beyond his wildest dreams, and then encounters his "doll" come thrillingly to life in the play's final two acts. What is Higgins's great line in their Act 5 parting scene - "I can't turn your soul on" - but an admission of love? In a famous postscript to the play, Shaw tells us that Eliza probably married Freddy; they set up a shop (secretly assisted by Col. Pickering) and thrived in the "real world", the one where the ability to earn a living matters. But the postscript also includes this admission from the playwright that he had created something more visceral than a clever comedy that deconstructs the British class system: Eliza, he says,

has a sense … that [Higgins's] indifference is deeper than the infatuation of commoner souls. She is immensely interested in him. She has even secret mischievous moments in which she wishes she could get him alone, on a desert island, away from all ties and with nobody else in the world to consider, and just drag him off his pedestal and see him making love like any common man.

If a utopia of men and women enjoying both social and sexual "good fellowship" (as Higgins terms it) did not seem possible in 1912, has it moved any closer a century later?