Essay: The Evolution of Dance Theatre 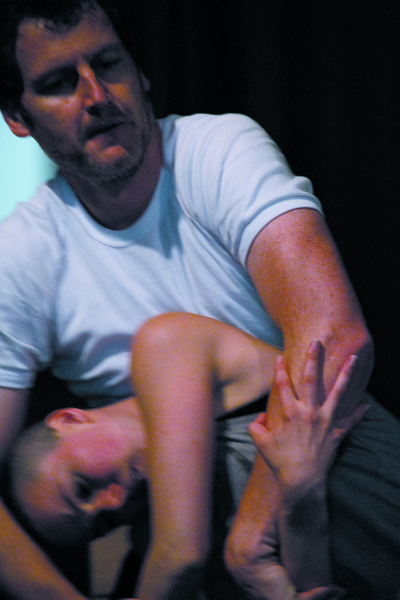 Featuring a cast of actors and dancers, ranging in age from a teenager to a 78-year-old, it certainly included dance but also had the performers lip-synching to extracts from pre-recorded interviews and using video cameras and hand-held screens in highly imaginative ways, generating humour, pathos and social commentary.

Reviewing it for her Stagenoiseblog, Diana Simmonds noted that the production crossed "so many boundaries it probably ought to have a passport."

"It this really contemporary dance? Is it really theatre? Does it matter? It's Kate Champion's Force Majeure and it's brilliant," concluded Simmonds.

Defining what is dance, what is dance theatre and what is physical theatre isn't entirely clear-cut. The boundaries are blurred and becoming increasingly porous as dance, theatre, physicality and other artforms - from sculpture to digital media - are combined on stage in new and exciting ways.

Dance and theatre have been interlinked since ancient times, of course. What's more, dance companies have often used the moniker of dance theatre in their name - London Contemporary Dance Theatre, for example, or Bangarra Dance Theatre.

Nowadays, however, the term "dance theatre" describes work in which dance makers put movement and words together and has been around for over three decades.

Physical theatre, meanwhile, is best exemplified by companies like Legs on the Wall, formed in 1984 by a collective of artists working in new forms of contemporary circus. Legs on the Wall has played a key role in the development of physical theatre in Australia, which it defines on its website as "a form that draws on circus, acrobatics and dance."

Champion admits that in the past she has found it hard to label her work.  "We have found that 'physical theatre' is sometimes a useful term when we haven't wanted people to expect too much dance in a production," she says of her work for Force Majeure - the company she founded in 2002 with Roz Hervey and Geoff Cobham.

Champion regularly uses ensembles of actors and dancers as in Never Did Me Any Harm. "So I've come full circle to being happy with calling it dance theatre," she says. "It feels more honest to call it dance theatre."

For the same reason, Champion calls herself a director rather than a choreographer. "I certainly bring my dance and choreographic knowledge and history into the room but I'm not interested in people moving the way I do and demonstrating movement," she says.

"I'm interested in giving the performer tasks to explore with their own physicality. I ask them to respond but I craft and edit the material they create physically and suggest things. I think the huge skill within dance theatre is knowing how to set those tasks and questions that will give you useful material."

"Dance theatre" as a form or "tanztheater" emerged in Germany. Its founder is widely acknowledged to be Kurt Jooss (1901 - 1979), a famous German ballet dancer and choreographer associated with the expressionist dance movement, who believed in combining dance, music and drama in performance. However, it was legendary German choreographer Pina Bausch who took dance theatre to the world.

Its roots can be traced back to the early 1900s when experimental American dancers Isadora Duncan and Ruth St Denis visited Germany. The interest they generated was intensified by the teaching of Emile Jaques-Dalcroze, a Swiss musician, who developed a method of teaching music through movement called eurhythmics.

In 1910, Dalcroze founded a school outside Dresden. German dancers Mary Wigman and Yvonne Georgi developed Dalcroze's eurhythmics into an expressive dance style, which was developed further by Jooss and his Hungarian colleague Rudolf von Laban into work they called tanztheater.

Bausch, who was born in 1940, studied with Jooss at his Folkwang Tanztheater in Essen for three years before going to the Juilliard School in New York. She would go on to run the Tanztheater Wuppertal Pina Bausch from 1973 until her death in 2009 where she introduced speech and other highly theatrical elements to her often stark, violent productions, becoming "the outstanding creator of dance theatre in Europe, if not the world," as The Timesput it in her obituary.

Bausch's work had a huge impact in Australia when her company toured to the 1982 Adelaide Festival. Several Australian dancers including Meryl Tankard also worked with her company.

Champion saw Bausch's company in Adelaide and again three years later in New York and says "it definitely had an impact" but it was Australian-born Lloyd Newson's London-based DV8 Physical Theatre that really inspired her.

Sydney-born Champion spent her teenage years in Munich where she studied dance. Returning to Australia, she performed with Australian Dance Theatre for two years but left feeling disillusioned and contemplated a move into film. Then she saw DV8 at the 1990 Melbourne International Arts Festival and her passion for dance was reignited.

Champion followed DV8 back to London, becoming a trusted collaborator of Newson's with whom she worked as a rehearsal director, performer and assistant on various productions.

Formed in 1986 and described by The Guardianas "a stroppy tomboy in the genteel world of dance", DV8 is now one of the world's leading dance theatre companies. Newson focuses on the body and works almost exclusively with trained dancers - albeit from different backgrounds and with different physiques. However, he combines movement with theatre, text and multimedia. Over the years, he has gradually used words more and more in order to address contemporary social and political issues.

His latest work Can We Talk About This?premiered at the Sydney Opera House's 2011 Spring Dance Festival. Exploring big, challenging ideas around multiculturalism, freedom of speech and religion, particularly Islam, the cast performed complicated choreography while speaking dense text drawn verbatim from 55 interviews. It was an astonishingly powerful piece of provocative, intelligent dance theatre in which the movement illuminated and intensified the focus on what was being said.

When Champion worked with DV8, Newson was using little text but like him she has increasingly used words in her work. Quite by coincidence she too began drawing on verbatim interviews around the same time as Newson.

"I find that I hit a wall when I try to make movement say everything," she told The Australianin 2001. "I just find it leaves people without understanding it or it's too naff because it's so literal."

Champion agrees that her work has become increasingly theatrical in recent years with dance and theatre now roughly half-and-half in her work. But dance remains a driving force.

"Even though I have an interest in text and words and including a narrative, I don't want to lose the incredibly poetic images and resonance that movement can bring to it," she says. "We know the power of that."

Theatre companies are now picking up on this kind of work. Sydney Theatre Company commissioned Never Did Me Any Harm.

Last year, Belvoir programmed Human Interest Storyby Melbourne choreographer Lucy Guerin - another choreographer blurring the line between dance and theatre - in its subscription season and follows it up this year with a new work by Guerin called Conversation Piece, which features three actors and three dancers.

(It should be noted that Neil Armfield programmed Under the Influence, a Legs on the Wall production devised by Champion, as part of Belvoir's subscription season as far back as 1998).

STC recently appointed choreographer Gideon Obarzanek as an associate artist. The founding artistic director of internationally acclaimed, Melbourne-based contemporary dance company Chunky Move from 1995 to 2011, Obarzanek has always been interested in using other artforms in his dance works.

He says that he and Guerin - who are partners - both think of their work as dance - "we have a very broad definition of what that could be" - but acknowledges that Guerin's latest work for Belvoir "is dance theatre as most people would define it."

Obarzanek says that his part-time role at STC will be "intentionally loose. I will have an input and feedback into programming and am also initiating a couple of performance projects with STC that will unfold over 2012 and 2013. One is small with an actor and a dancer and the other is a large group piece, starting out as a workshop, with a couple of dancers but mostly actors and also people who have never performed professionally before," he says.

In 2010, STC produced Stockholm, a 2007 production by innovative UK physical theatre outfit Frantic Assembly, which describes its work as "theatre that fuses text and physicality."

Performed by two actors, Stockholmfeatured a script by Bryony Lavery and fairly demanding choreography. Here theatre extended into physicality rather than the other way around as in dance theatre.

Both Obarazanek and Champion say that in recent years theatre artists have started to show a good deal of interest in their work. "I think that contemporary dance has become more theatrical and scripted theatre is looking for other ways to communicate stories on stage," says Obarzanek.

Deborah Jones, who reviews dance for The Australian, welcomes the interest from theatre companies.

"For the longest time, people we would call choreographers rather than playwrights or directors - Kate Champion is a great example - have been making dance theatre that uses all the tools at an artist's disposal: heightened movement, text, sound, multimedia. And they've made wonderfully rich work," she says citing Champion's solo pieces Face Valueand About Face.

"It's taken theatre companies quite a while to notice that dancers have crossed the border and it's great to see them offer their audiences - people who may have little experience of dance - the chance to get into this hugely imaginative and thrilling world."