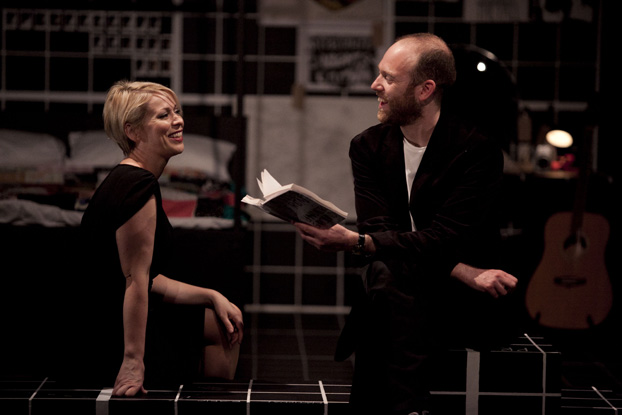 Describe your character in three words.

MP: One and a half pints of lager.

What is your favourite musical theatre show?

MP: I saw the movie of Oliver!when I was a little kid and I loved Oliver Reed as Bill Sykes. He was great. What a baddie! Ron Moody as Fagin too and little Jack Wild as Dodger - all perfect.

CB: It's maybe not the coolest, but I think it has to be Grease. Why?? The songs, the quiffs, the pink satin jackets, Rizzo, sharp gag lines, little bit of danger (when you're 10!)

What is your best pick up line?

MP: I'm not sure about pick up lines. Drink was often involved and my memory is a bit hazy. I think I did a lot of listening/nodding. I once met a famous pop singer and all I could think of to say was "My name's Matthew. I'm from Scotland."

CB: I'm not sure I have ever picked anything up with a line... I am more likely to stumble into a love affair, in a clumsy, deeply unenigmatic type manner... I did once use a line: "Both you and I know there is no salt in this room". You need to know the context (it involved a t-shirt and a big red wine stain...)

What is your favourite scene in the play?

MP: I like the sex scene because it breaks the ice with the audience. We all know where we are. And I like any scene when Bob and Helena talk to each other in the moment with no narration.

CB: The one where Bob and Helena sit on a bench and discuss all the ways in which 'they agree'. You can hear so many laughs and guffaws of familiarity, it's really warm and heartening.

Do you prefer performing comedy or drama?

MP: I think I prefer comedy. You get laughs - or not. There's a direct relationship with the audience and you know all about it.

CB: Until now I've preferred drama because I enjoy exploring the complexities of emotional responses in a character and the psychology underpinning the contradictory ways in which people behave. But having toured Midsummer, and seen the joy it seems to bring to people across the globe, I gotta say I like making folk laugh a lot... maybe more than anything.

Do you have a pre-show routine before each performance?

MP: I lie on my back and say mahmaymemaymahmaw. After that, I'm a complete bundle of weird tics (touching wood, all kinds of crap).

CB: I'll engage in some idle banter with Matt and Sarah (our Stage Manager), pottering in my dressing room, a bit of yoga, a voice warm up in the shower. I'll maybe belt out a few choruses of a Janis Joplin...

How do you feel at the beginning of a performance?

MP: Very nervous and it can feel a bit daunting until you get into it.

CB: Like I'm at the top of the very highest peak of a rollercoaster, teetering, because as soon as we let rip, there is not one stop for breath in nearly two hours solid on stage. It's a huge ride: knackering, exhilarating, emotional, demanding, twisting and turning endlessly.

How do you feel when it is over?

MP: A bit knackered and a bit elated. In need of a drink.

CB: Like a soggy, mascara-splattered, wiped-out mess of a woman. I think I look a bit like a Jackson Pollock by the end, but thrillingly and intensely alive.

What would you say to your character if you met them in real life?

MP: How do you stay so young?

CB: "Dump the married geek! It's a highway to nowhere!" and "Go with your gut, even if it seems to go against everyone else's expectancies" and "Change is possible… always".