Feature: In the rehearsal room 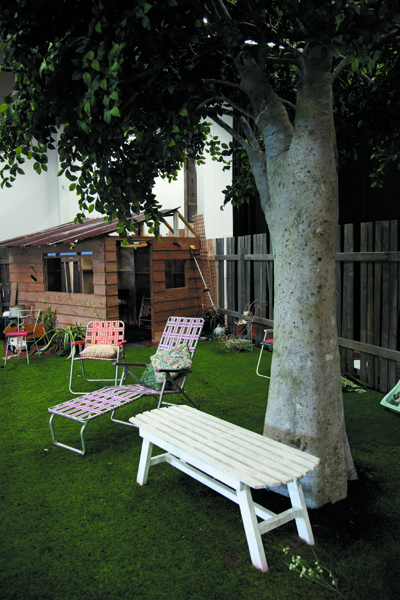 It's a delicious irony that neither Christos Tsiolkas, author of the bestselling novel The Slap which started it all, nor Kate Champion, the director of Never Did me Any Harm, are parents.

In some conversations about the dos and don'ts of parenting, the views of people like them without children of their own carry less weight or are dismissed with a 'What would you know?'

Yet both are actively engaged in the lives of children and families. And even if they weren't, they are entitled to have an opinion just by virtue of the fact that, hey, they were kids too, remember? But when it comes to parenting we tend to endow experience with exclusive, ultimate, unassailable authority.

Of course, looking at family dynamics from the outside presents a different, detached perspective, which can make parents feel uncomfortable and judged. After all, the job is hard enough without feeling as if you have to justify why you do it a certain way.

When did it all become such a minefield? When did the boundaries between discipline and abuse get so blurred? Is the child who has been hit carrying emotional scars that will mark the rest of their life? Or as the title of this work (drawn from one of the many interviews Kate used as the basis for the piece) suggests, is it of little consequence?

Like Christos, Kate has a forensic eye and ear for the comedy, pathos and complexity of human relationships. She proved that, together with her longtime Force Majeure collaborators Roz Hervey and Geoff Cobham with The Age I'm In, her study of three generations. This time, she's tuning in to some of the most vexed questions that face mothers and fathers today about their roles as guardians: discipline is one thorny issue, but so is the overwhelming amount of advice that more seasoned players volunteer to  bewildered newcomers to the field. Somehow, we've professionalised parenting, creating two camps: those with competent skills and those who are left feeling distinctly inadequate. At the same time, parenting (remember when that used not to be a verb?) is now so much more public than it used to be - didn't all this stuff used to get sorted out in private?

And then there's the less acknowledged territory of competition: the rivalry and superiority of parenting styles, the boasting about one's children as if they were all prodigies and champions, the pressure to provide meaningful opportunities and stimulation at every turn, and the anxiety, the fear that so-called helicopter parents feel about the vulnerability of their offspring, coupled with the often absurd legislation that makes every act, no matter how innocent, into an opportunity of lethal potential. Since when was riding a bike in the park or walking home from school such a big deal?

And what about the ultimate taboo that no one ever raises: the feelings of the dissatisfied parent, who fails to find the experience rewarding? You don't have to go to the extremes of emotional frigidity of the mother in Lionel Shriver's We Need To Talk About Kevin, (another non-parent who entered the debate fearlessly) to acknowledge that the bond between parent and child is not always all you might hope it to be. But such an admission, were it ever aired, would be made with shame and met with shock and revulsion. To be an unfulfilled parent is, for some, to fail as a human being.

Where does the myth that parenting is natural come from? It's so entrenched we even idolise and sentimentalise good parenting in the animal kingdom. You only have to look at how popular wildlife documentaries are: we seem to have an insatiable appetite for scenes of endless licking and rearing of cubs and pups, a need to watch the passing on of hunting skills, the teasing of adolescents testing boundaries as if these rites of passage could reassure us that we are doing it right according to the immutable laws of nature. On a recent visit to a sanctuary for orphaned apes, it was refreshing to hear a keeper talk about the animals that were just hopelessly indifferent or bad parents. They had little interest, empathy or instinctive care for their offspring. But unlike humans, they suffered no guilt over their lack of interest.

In the rehearsal room, (where parents outnumbered non parents five to two), conversations kept yielding fresh material - even during the tea breaks: about terms like yummy versus slummy mummies, and wondering what the dad equivalent might be? Sometimes a proud mother showed off their adored son or daughter doing something remarkable on their iPhone... When you are both parent and performer, you don't leave that role at the door of the theatre, it accompanies you everywhere you go. Several of the cast have very young children. The memory of months of interrupted sleep is still raw in their minds, not to mention their bodies. And unlike some workplaces that prefer to downplay the demands of child-care, here, these concerns are quietly factored in to the schedule. Behind the dance you see on stage is another parallel dance, a to-ing and fro-ing invisible relay between partners that is never overtly acknowledged, but without which the work simply could not happen.

Creating a space where trust and safety are implicit in the process, where experimentation and play are encouraged and words of praise and guidance flow freely, while leaving no doubt about who is in charge, Kate proves herself to be a natural parent. Nurturing, forgiving, patient and loving she creates an inspiring alternative version of the modern blended family with its disparate personalities, attitudes and behaviour, its push and pull of will and altruism, its moments of absurdity, frustration and tenderness. Only without slaps, tears and embarrassing temper tantrums.

More of Caroline Baum's notes from the Never Did Me Any Harm rehearsal room are at www.ndmah.posterous.com

The program for Never Did Me Any Harm is $10 and available from the bar at Wharf 1.