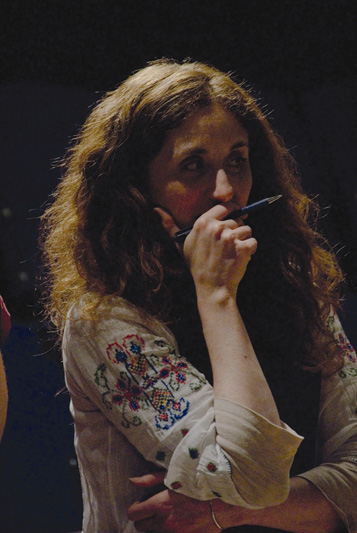 How did you come up with the design for Midsummer?

I was lucky to have been involved in the development workshops on the piece and have had many conversations with David (Grieg, director/playwright), Gordon (McIntyre, composer) and the actors, so the design has developed slowly alongside the play rather than after it had been completed. It has been a natural progression of an idea- a bit like sleeping on something…

What was your starting point?

The starting point was a double bed. It is the representation of the heart of the piece, a relationship between two people. For a long time we thought we would just have a giant mattress in the space but it would have been too limiting. Now the bed is in the middle of a sort of 'museum of memory' or a quirky science laboratory where the story is played out over and over again, analysed, examined and catalogued.

What is your process for designing a set?

Lots of fantastic conversations with the director, lots of drawing, lots of reading and visual research, lots of cutting and sticking, lots of anxiety and excitement and finally a finished model and then always thinking of all the other ways it could have also been.

It does vary depending on the project but I think I always begin with tiny details and then build out. And I tend to be quite accurate with my model-making even in the rough, early stages to get a sense of whether an idea will work or not. You also have to be able to throw lots of ideas out even if you have fallen for how they look. You know in your heart that something is not right for the piece but by doing that you always open yourself up to the right solution.

You observed some of the development sessions that David and Gordon ran with the actors Cora (Bissett) and Matthew (Pidgeon); did these inspire/inform your design?

Yes absolutely. It made me think about solutions in a different way and getting to know the actors and their approach and ideas, so early on it was really useful. I also learned some ukulele chords!

Did David and Gordon have an input into your design?

Yes definitely. The design had to respond to the spirit of the story, the writing and the music. Also we have all shared our ideas on every aspect, which has been great. although I met with David more to talk about the set specifically as it had to serve how he wanted to direct the piece in the space.