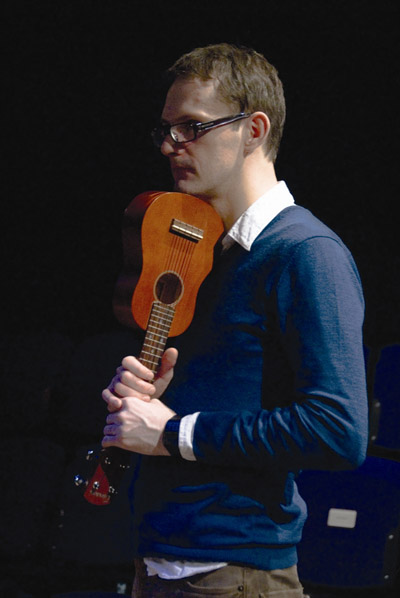 What was your first experience of musical theatre?

This is it! Midsummerwas my first experience of working in musical theatre. Although I did once play a Roman Slave Driver in a Primary School play and it had a song that went with it.

Generally speaking I don't like musicals as such.  I like stories and I don't really like anything that breaks the narrative.  I'm not a fan of 3D films for that reason and a lot of musicals feel that way to me.  My favourite musical is Singin' in the Rain, which I love, but that gets away with it because the setting is the movies so it's not strange to have them burst into song.

What is the difference between a musical and a "play with songs"?

I guess to us it was the case that a musical is orchestras and dancing girls, fireworks and feather boas.  It is a show, a spectacle that splashes all over you. Our play with songs is the flipside to that - instead of a forty-piece orchestra we have two thirty-something Scots with acoustic guitars.  The musical numbers are not there to whack you over the head, they are there to touch your heart and make you feel an affinity/empathy with the characters. When you've seen it you will see why we bill it as we do.  Put more simply - we didn't want to mis-sell it to the public and have angry hordes of Lion King fans demanding their money back.

Where did you look to for inspiration for the music you composed for Midsummer?

To me, Midsummeris about Edinburgh more than anything else.  It is about my Edinburgh and David's Edinburgh, about what it means to us and has meant to us at different points in our lives.  The music and the songs are inspired by the city more than anything else.  There are also two spoken word pieces in the play which I won't reveal - one is an extended riff of just how bad things can get for you and the other is a very personal reminiscence of my growing up transplanted into Bob at a key point in the play.  Some of the play was written to work with the songs and some of the songs were written to work with the play, so the characters and David's writing was also an inspiration for me.

What was the biggest challenge of composing the music for Midsummer?

There were technical challenges that were basically problem solving, but I think the biggest challenge is in the nature of the songs.  Normally in a band you write songs and put them on an album/website and expect that people will listen to them a few times before they decide if they like them.  You get the chance for your songs and their meanings to grow on people, but with Midsummerthat is different - you get one chance for the song and the music to have its impact.  However you also have the scene and the context set for you by what is happening at the time so it was important for us to make sure the songs are within the fabric of the play and not pointless 'extras'.

Is the music in Midsummersimilar or different to the music you create with your band Ballboy?

It is similar in some ways - a lot of Ballboy songs are written from the point of view of a character or characters, so that had something in common with the Midsummer writing.  The main difference was that I was writing songs for someone else to perform and also for two people, one male and one female, so that gave me a new aspect to play with.

Why did you decide to experiment with the world of theatre?

The opportunity just came up and David approached me with the idea to try and do a piece of theatre based around the music that we both liked and that I made. It was such a low-key pitch, something like, "Let's make it and see if it's any good and if it is we'll see what we can do with it".  It wasn't written to commission; it had no deadlines or people peering over our shoulders.  It was a chance to do something entirely creative in a new context and that was very attractive to me.

Has your experience working on Midsummerinfluenced your work with Ballboy in any way?

I think so - any new creative thing that you do opens you up a little bit more. And while that's not always a good thing - you can be too open, too influenced - I think it has helped me approach songwriting in a slightly differently way.  I think I've become more collaborative, even with myself, if that makes any sense.

Do you have plans to work in theatre again in the future?

I do - David and I have started working on another play and we are looking forward to seeing what we can do this time.

What is your favourite song in Midsummer?

A song called Old Town- it is the last song sung in the play and one of my favourite of all my songs.

Describe the music in Midsummerin one word.

If I can have two then I'll have romantically bruised.  If I can only have one, then bruised.