Feature: The Art of Clowning 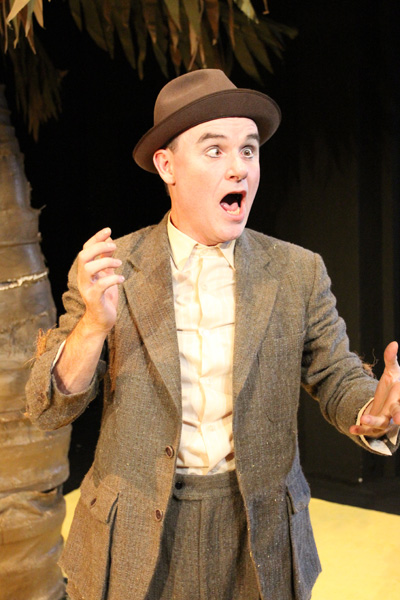 Comedy is based on pain and truth, and as a performer of comedy I always remind myself of this. The further you go into the dilemma of a character, the funnier it is for an audience. If you're aware of your clowning or your comedy, then the audience starts to become aware that you're aware, and it starts to become a bit
smart-arse. It's what stand-up comedians are very good at doing, laughing at their own jokes, and presenting the idea that we live in a comic world, whereas actors have to play characters from the character's point of view, and those characters don't view themselves as being caught in a comic situation. It's actually often the opposite: the characters are in desperate situations and take desperate measures that become funny in themselves.

One of the things that clowning requires, as opposed to perhaps drama, is a very strong connection with the audience; you really have to be in tune with the people who are watching you and you have to listen to them very carefully to know how to gauge how far to take things.

The tricky thing is when I'm in rehearsals with the director, and say we decide that the first laugh will be generated when I back away from the audience and trip over a rock. If this laugh is not generated then the rest of the show can't go on, so there's a certain amount of trust required as we try to get that first giggle out of the audience. Once I have that giggle, then all I do is play with that.

Clowning is really about generating a dialogue that your audience, through their expression and response, shares with you. I always think of it in terms of compression, and I try to compress the laughter that the audience sends back at me, to squash it inside of them so it starts to hurt, so they don't want to miss the next bit and they shut it in, and that thing they feel inside them is a very strong, almost playful kind of laugh that is later released.

One of the things I've always found most interesting about 'edgy' clowning is the word edge, meaning the edge of the stage where you have one foot in the audience and one foot in the story and you ride dangerously close to living out of the story and giving the audience what they want, but also being reigned in by the discipline of what you have to do within the story. It is an edge because if you give the audience too much, then you don't have respect for the story, but if you give them too little then you're not playing with them enough. There's a fine edge where a character can be in the middle of something, but the audience's response can draw him out to them.

There are two very distinct sorts of clowning: white clowning and black clowning. The white clown is very good at clowning, very good at mime and at generating laughter with an audience and playing with them. The black clown is the anti-clown, and he mocks mime and the idea of needing an audience, and questions how perverse he can be but still get the audience's laughter. He might mime grabbing a female from the audience, putting her on stage and undressing her and then doing the job on her and smacking her on the bum, which sounds ridiculous but the audience is in a state of laughter, so he looks for how he can take it further, to find what they won't laugh at. From this point he puts it back to the audience and basically says that if you are going to laugh at me and find some value in me, then don't try to change me. That's the great thing about the villain is that, although you can't love him because a villain doesn't love himself, you can feel massive adoration for him, and find him sexy and devilishly charming. But the fact is that they are hideous characters.

One of the things that I'm exploring with this piece is the extremes of human nature and the fact that within us we have the ability to be so loving and generous and kind, but we also have this side that can be so twisted and dark in our thinking and our behaviour. You get to choose what you want to be, the light or the dark, because you have it all in you, and this story allowed me to explore the extremes that I know I have in my personality.