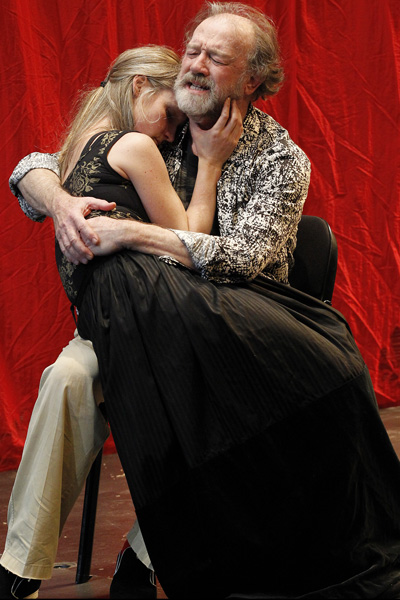 Like his protagonist Bruscon in The Histrionic, the author Thomas Bernhard did not recognise a line separating real life and the stage. He was known for deliberately provocative, theatrical interviews, in which he was given to invent details about his past. One early self-stylisation was his claim to have written a thesis on the dramatists Antonin Artaud and Bertolt Brecht as a student. Although Bernhard did study theatre at the prestigious Mozarteum conservatory in Salzburg, there is no record of any such work by him.

The Austria that Bernhard knew as a young man had suffered a tremendous loss of national prestige, going from an influential world power to a largely-irrelevant backwater in the course of a generation. In light of this, the young Bernhard's attempt to position his work between two of the most regarded cosmopolitan European theatre movements of the 1950s, Artaud's 'theatre of cruelty' and Brecht's leftist political drama, becomes more comprehensible. Bernhard's claim to an international artistic lineage was perhaps also meant to obscure his theatre's roots in the works of two more provincial (but no less gifted) Austrian predecessors: Johann Nestroy and Karl Kraus. But our appreciation of Bernhard's The Histrionicwould be much poorer without knowledge of these and other home-grown models for his dark, apocalyptic comedy.

Johann Nestroy (1801-1862), like Bernhard, began his career as an opera singer. Unlike Bernhard, who had to cut his voice training short due to his chronic lung illness, Nestroy developed into a performer much in demand, singing more than 80 roles in six years. As his career path took him from the provinces to Vienna, he developed into an almost exclusively comic actor, and eventually stopped singing in operas entirely.

He became known for idiosyncratic, "grotesque," over-the-top performances that shattered the illusion of the theatre as an enclosed world apart from the "real" one. He was both lauded and harshly criticised for this acting style, which made the artificiality of the stage impossible for audiences to ignore.

Nestroy further troubled the distinction between authorial personality and performed role when he began to write works for the stage himself. His own 'farces with song' (comedies with satirical musical numbers that characters would strike up without warning), inveighed against social inequality, repression and censorship in the Austro-Hungarian Empire using a biting Viennese vernacular. Many of these plays are set in the milieu of the theatre, where actors play actors, and in this sense his characters are also forebears of Bruscon.

Nestroy is mostly known to English-speaking audiences through adaptations like Hello, Dolly!and Tom Stoppard's On the Razzle, both of which are derived, via an earlier adaptation, from the comedy Einen Jux will er sich machen(roughly, He Wants to Play a Prank, a piece itself based on an even earlier short English farce). This third-hand reception of Nestroy's lighter fare however obscures the darker side of his comedy, which contemporaries often found cynical, pessimistic or despairing. As such, Nestroy can be seen as an author like Bernhard (and, indeed, Bruscon) whose works walk a line between comedy and tragedy. Karl Kraus, Thomas Bernhard, and the Austrian Nobel Prize-winning author Elfriede Jelinek are all indebted to Nestroy's legacy of dark satire.

Karl Kraus (1874-1936), the man responsible for reviving Nestroy's reputation in the early 20th century, was also trained as a singer and actor before launching a career as a writer. His magazine Die Fackel (The Torch), which he founded at the young age of 24, quickly became a Viennese institution. Kraus was almost solely responsible for the magazine, from the editorial content to the copyediting, which he viewed as a high moral calling. Die Fackel mixed muckraking political journalism with cultural and linguistic criticism, all of it formulated in an invective style that combined erudite high German prose with low vernacular punning. Like Bernhard and Nestroy, Kraus deployed language like a weapon, delighting in 'finishing off' his opponents in public feuds fought on the pages of his magazine, and, as was often necessary when his targets struck back, in the courtroom. Bernhard's signature verbal broadsides, which also attracted several libel suits, would be unthinkable without Kraus.

Like Bernhard and Nestory, Kraus was also a playwright. A vocal opponent of the First World War, he wrote an epic play called Die Letzten Tage der Menschheit (The Last Days of Mankind)that spans 800 pages (and, performed without cuts, around ten evenings), featuring characters from all ranks of society, from coffee house waiters to the aristocracy. With a feel for Austrian dialect reminiscent of his idol Nestroy, Kraus exposed the hypocrisy, bad faith and toxic nationalism among his countrymen by re-contextualising quotes from journalists and politicians, turning their own words against them.
Two recurring central characters in the play, the Optimist and the Nörgler (grumbler or quibbler, often seen as a proxy for Kraus' personal views) structure the action with their monologues. Bruscon, himself a Nörgler par excellence, is clearly cut from similar cloth. Begun in 1915, in the midst of the First World War, and published in several editions from 1918 to 1922, The Last Days of Mankind is less a monition of an impending apocalypse than the post-mortem of an already-necrotic empire. Kraus himself viewed staging the play as an impossibility, writing in the introduction that his drama was more suited to Mars than planet Earth. It is not hard to see Kraus' highly ambitious play recapitulated in an absurd register in The Wheel of History, Bruscon's own work of 'total theatre'.

Kraus died in 1936, before Austria plunged into another apocalyptic conflict, the Second World War. But once again mankind proved not to be in its last days after all. The Histrionic, like The Last Days of Mankind, is a belated apocalyptic vision, a prophecy of doom after the catastrophe has already passed. This is evident despite the humorous anachronism on display in Bernhard's drama (best illustrated, perhaps, by Bruson's request for chamber pots for himself and his wife). There are many elements which clearly mark the play as a product of its creator's times.
First, there is Bruscon's row with the local fire department. This is a reference to events that took place in 1972 during the Salzburger Festspiele, a prestigious theater festival, when the German director Claus Peymann (b.1937) demanded all emergency exit lights in the theatre be turned off to heighten the effect of the last few minutes of Bernhard's play Der Ignorant und der Wahnsinnige(The Ignoramus and the Madman). Peymann proved to be every bit as intransigent as Bruscon during the ensuing quarrel with festival management.

After his demands were rejected on the grounds of fire safety, Peymann allowed the opening night performance, but then cancelled the next performance without warning, appearing personally in the theatre foyer holding a sign informing incensed ticket holders of his grievances. Bernhard soon joined the fray by firing angry telegrams at the festival management. After protracted negotiations, the two parties were unable to reach an agreement and all subsequent scheduled performances were cancelled. Though this incident is notorious in the German-language theatre world, it was only the first of many scandals that Bernhard and Peymann provoked during their extensive artistic collaboration. In this sense, Bruscon is a pastiche of both Peymann and Bernhard's outsized public personae. Bernhard later wrote a short comic piece that caricatures Peymann as a Bruscon-like megalomaniac director, who wishes to stage 'all of Shakespeare' (including the sonnets) in a single night.

Finally it is Adolf Hitler, the most infamous of all histrionic orators to emerge from the Austrian provinces, who provides another, more fraught model for the character of Bruscon. Bernhard nods to this by placing the dictator's portrait on the stage of the Black Hart, so that the theatrical tyrant Bruscon is continuously standing near the political tyrant Hitler. This humorous detail is not meant to make light of Nazism - Bruscon criticises the remnants of the era in no uncertain terms, much like his creator did - it is rather a canny acknowledgment of the trace of Nazi oratory that still obtains to the protagonist's diatribes.

The resemblance, however slight,between Bruscon's abusive behavior towards his family members and the legacy of political extremism in Austria is one of many indications that Bruscon is himself implicated in the dilettantish, provincial environment he decries with such vitriol. This circle of invective, which always turns back on itself to indict its creator, means that the audience is thrown between the extremes of pathos and farce in a motion that at first seems unceasing.

As spectators, we are continuously asked the question posed by the title of one of Bernhard's early short stories: Is it a Comedy? Is it a Tragedy? But as Bruscon's diatribe slowly reaches a fever pitch, circling ever more furiously back on itself, we become increasingly inclined to agree with the verdict Bernhard puts in the mouth of the protagonist of that early story: "Truly a comedy!"