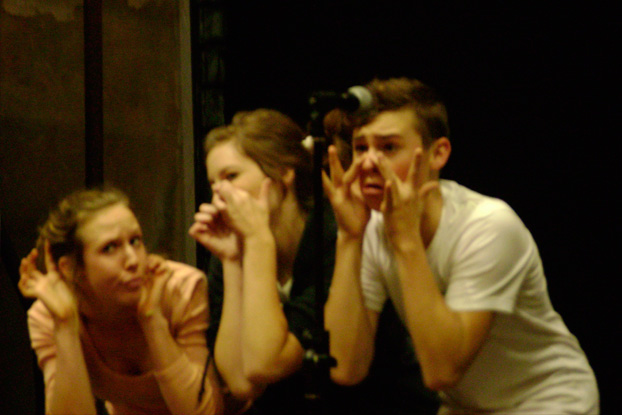 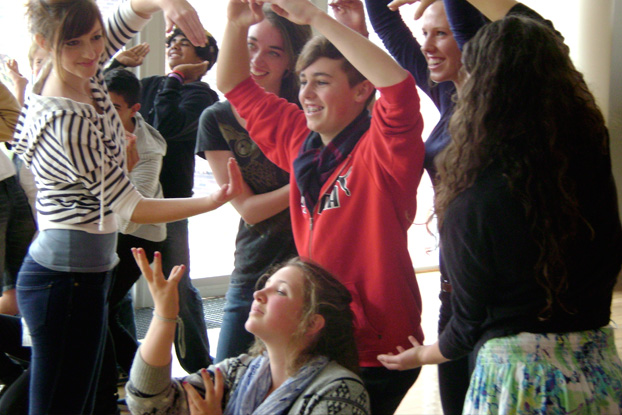 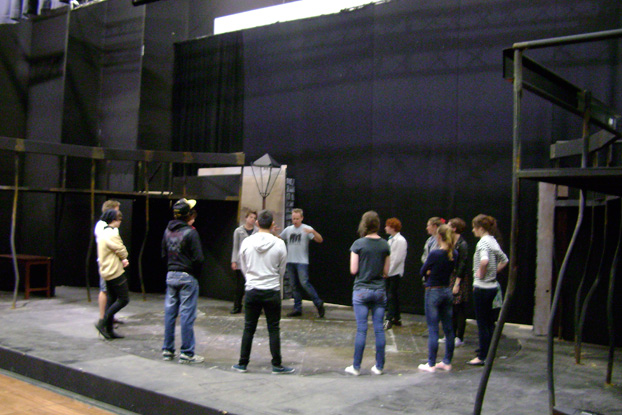 We've now completed our second week of work in Armidale.  Arriving this time, everything felt much more familiar.  The leaves were turning, so the town was dominated by vibrant red and yellow hues, and we started to get the sense of seasons that everyone talks about in Armidale.  It was also school holiday time, and given the town's large uni and school population, it felt much quieter than our last visit.

When I mentioned this to Sarah, the venue manager at The Hoskins Centre (our base for the week), she replied "It's easy to feel at home in Armidale" - an interesting choice of words from her, because our key theme going in to this week was to explore what it means to feel 'at home'.  A lot of what Jo (Turner, the playwright) and I have talked about in recent months in terms of this project has been about identity and the place you live in, and whether that gels or doesn't gel.  The difference between living in a small town and a big city, and what that means to different people.  Does living in a small town where everybody knows you make it easier to be yourself or harder?  What's more important - feeling at home or feeling free?

This has become a big part of how we're approaching this project.  I think it's a particularly relevant theme for the young people who live in a town like Armidale, where there are so many educational opportunities, however many of the young people we have spoken to talk about wanting to leave in order to 'do something bigger' with their lives.  And yet we also met a large number of Armidilians who have done that trek to the big smoke in their young adulthood, only to realise that they wanted to come home to have their own families.  This seems to be a life cycle and a dichotomy that resonates with many smaller towns.

For this trip, we worked with a group of 13 students from across the high schools we had visited last time, ranging from years 9 to 12.  These were the students we had identified as potentially being able to contribute different viewpoints to the material that we wanted to explore.  The week wasn't about teaching in the strictest sense of the word - the 13 were our collaborators, and we were asking them to create material drawing from their own experiences, but also their imaginations.  It was about learning through osmosis, in a professional context, and working together as peers.

The week started with an exhaustive, confidential questionnaire about their lives, thoughts and feelings.  This then formed the basis through the week for exercises to explore different things that they had talked about.  We also did one-on-one interviews, and focus groups on different topics.  We explored the themes of home, isolation, leaving and returning, bullying, social media, dating, call of duty etc., from a number of different angles - either through verbal improvisation, writing scripts, physical responses, using music and choreography.  All of the participants provided a favourite song which we used at different points during the week.  They wrote scripts in 'Facebook speak' which were very funny, and practically gobbledygook to anyone over the age of 20.  We ended the week with a long-form, group improvisation around the idea of a 'social', where we set each participant a different task around choosing one person they 'liked', and one person they 'hated'.  The result was fascinating to watch, as storylines began to develop, alliances were formed and broken, and raw teenage energy was unleashed.

We had a great time getting to know our collaborators this week, who approached the work with heart and intelligence, even when some of the things we tried didn't quite work.  We're now in the next stage of that work, where Jo is taking all the material from that week and trying to wrangle it into the form of a play, before I get a chance to respond and help to develop that work.  I have some idea of what he's working through, but haven't seen the script yet.  Terrifying as that is, I'm sure it will be great.