Feature: The Lucky One 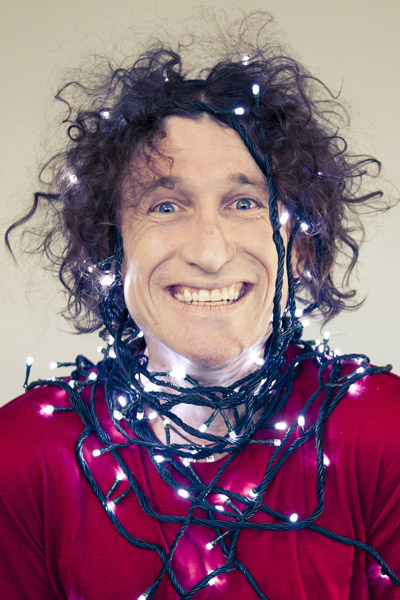 Season two of Actor on a Box already - gosh, where does the school term go? Preparations are well under way for The Luck Child, a re-telling of an old Russian folk tale using the particular talents of performer David Collins, the hirsute member of the Umbilical Brothers, Australia's favourite physical comedy duo. In fact, I suspect there'll be a few parents pestering their kids to take them to see this one, although David also has thousands of smaller fans following the success of the Umbie's television series for kids, The Upside Down Show.

So expect a lot of sound effects, bizarre characters, nonsense and classic mime as he tells the story of Lucky, the seventh child of the seventh child (excellent opportunities for basic maths education) who is foretold by the king's wizard to be the next ruler of the kingdom. Not that the king wants anything to do with that - he seizes the child and sends it floating away down the river to its doom.

Funnily enough, the baby is plucked from the raging current by a circus monkey and as he grows up, Lucky's extraordinary luck turns around the fortunes of the hapless circus. Which wouldn't be hard - their knife thrower is blind, the trapeze artist has lost an arm and they're running out of small people for the human cannonball. Lucky's fame spreads throughout the land, all the way to the castle, and the king arrives ringside to finish him off for good. But his evil plans go astray (of course) and after adventures in The Cave of Echoes, The Island of Death and a quest to seize the Golden Flea - not the golden fleas, we only need the one - from the Three-Headed Hound of Hell, Lucky triumphs as all good folk-tale heroes do.

The Luck Childis a theatrical roller-coaster for kids of all ages, although we're targeting the four to forty-four year olds. Plenty of laughs, a few scary surprises and a great opportunity to see one of our best physical comedians making a fool of himself. And he's pretty good at it - it's what he does for a living.