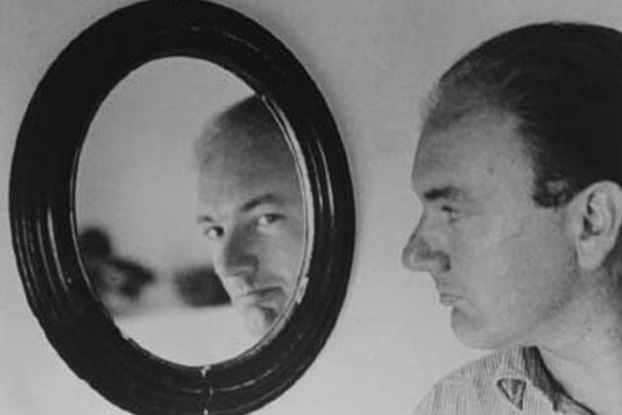 Although little known to Australian audiences, Thomas Bernhard is widely considered to be the author of one of the most significant bodies of writing produced in Austria during the 20th century. Revered since his death in 1989 as a national treasure, his relationship with his country and fellow countrymen during his lifetime was fraught, perhaps stemming from his difficult childhood.

The product of a liaison between two young Austrians, Herta Bernhard and Alois Zuckerstatter, he was born in 1931 in Heelen, a city in Netherlands to which his mother fled to escape the shame of her child's illegitimacy. His father rejected Bernhard from the start, refusing to care for or even acknowledge him, and  Zuckerstatter moved to Berlin where he committed suicide in 1940. His mother was hardly more willing to care for her son, and she struggled with the temptation to offer him for adoption, instead placing him in a series of foster homes and state institutions for illegitimate children before finally leaving him with her parents in her hometown of Seekirchen, just north of Salzburg. His grandfather Johannes Freumbichler, an outspoken and mildly successful author, was a powerful influence on Bernhard, encouraging him to pursue an artistic education from a young age and introducing him to the work of many great writers.

In 1936, when Bernhard was five years old, his mother remarried Emil Fabjan, gave birth to two more children, a boy and a girl, and moved to Traunstein in Bavaria, German, where her oldest son joined them in 1937. He never really connected with his step-family and proceeded to have a difficult, fragmented youth, moving between schools and institutions, and suffering from frequent physical and emotional illnesses.

Despite his intelligent, Bernhard struggled to fit in at school, and left at the age of 16 to take up an apprenticeship with a grocer. Independent for the first time in his life, Bernhard flourished, and used his wages to pay for singing lessons until he was struck by serious illness in 1949, first pleurisy and then tuberculosis. He was hospitalised, and was admitted to the same hospital that was treating his beloved grandfather, who died shortly afterwards. This was a bitter blow for 18-year-old Bernhard and a turning point in his life. While in hospital, inspired by his grandfather, Bernhard began to write poetry, and was further encouraged in this pursuit when he met Hedwig Stavianicek the following year in a sanitarium in Grafenhof, near Salzburg. Stavianicek was 37 years Bernhard's senior, and a sophisticated and intelligent woman who recognised the young man's potential as a writer.

The transition in Bernhard's life was accelerated when his mother died later that year of cancer, effectively leaving him without any significant blood relations, and allowing him to forge his own path and identity for the first time. Stavianicek remained his close friend and life companion until her death in 1984, a relationship that was ambiguous but apparently platonic, despite the fact that Bernhard never married and was consistently asexual in the public eye. With the support of Stavianicek, Bernhard recovered his health and moved towards seriously pursuing a creative career.

He studied acting and directing at the performing arts university in Salzburg, the Mozarteum, before turning briefly to journalism and finally to poetry, prose and playwriting. In the early 1960s he bought a home in the Austrian village of Obernathal, which was to be his base and escape for the rest of his life, and he wrote Frost, the first of his 13 novels, in 1963 and produced his first play in 1974.

Despite winning numerous awards, including Österreichische Staatspreis für Literatur (1967), the Anton-Wildgans-Preis der Österreichischen Indistrie (1967), the Georg-Büchner-Preis (1970), the Franz-Theodor-Csokor-Preis (1972), Bernhard's work was often not well received, due to his undisguised and often brutal criticism of his homeland. Largely reviled by his countrymen during his lifetime, Bernhard was embroiled in numerous controversies including a messy accusation of defamation related to his novel Holzfällen.

In addition to social and political critiques, Bernhard also wrote from his own experience, taking the opportunity to reinvent and explore his life story in various autobiographical pieces of writing. Often featuring themes of abandonment and impending death, undoubtedly inspired by his difficult childhood, Bernhard's work combines vicious denouncements of his country, with its Nazi past, with a dark and bitter humour.

Bernhard died on February 12, 1989 in his home in Obernathal, in the presence of his half-brother Dr. Peter Fabjan, who was to act as the executor of his will. This was not an easy role as Bernhard, controversial even after death, left a directive that no new performances of his plays or editions of his books could be produced within Austria. Despite this, Bernhard has posthumously become a literary icon in Austria and landmarks related to his life have become tourist destinations.

This is an excerpt from the program for The Histrionic (Der Theatremacher), which is on sale for $10 in the Wharf Theatre foyer.