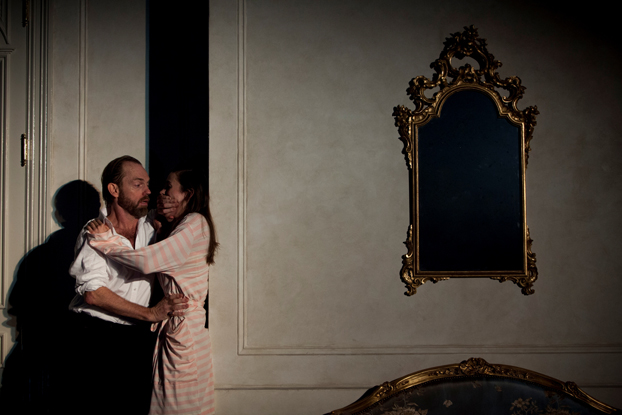 Sexually rapacious young men are a feature of the eighteenth-century and Regency social landscape. They are even to be found in Jane Austen's novels; obviously, they are there to set off the various perfections of the heroes, but also because they represent a real threat to the triumph of the good-hearted and the institution of marriage. Wickham, in Pride and Prejudice, nearly succeeds in seducing Georgiana Darcy for her money, and flirts with many other girls before he runs off with silly Lydia Bennet. Willoughby, in Sense and Sensibility, admits he was a "libertine" in getting an under-age girl pregnant and abandoning her. Henry Crawford, in Mansfield Park, decides that he is going to make the virginal heroine Fanny Price in love with him: chillingly, he says to his sister, "I cannot be satisfied without Fanny Price, without making a small hole in Fanny Price's heart."

This graphic metaphor evokes the heartless lust of the libertine whose modus vivendi is seduction and rape - all the more piquant if the victim is a virgin. But, just like Choderlos de Laclos' Vicomte de Valmont, Austen's amoral Henry Crawford unexpectedly falls in love. The quiet, pious, and modest Fanny is unlike any woman who has previously piqued his interest. She is Austen's version of Mme de Tourvel; Henry Crawford, the anti-hero of Austen's most profound novel, models himself, whether consciously or unconsciously, on Laclos' Valmont. His sister Mary, who watches, advises on and enjoys all his adventures, is the equivalent of Laclos' Marquise de Merteuil. The relationship is close and unhealthy; the siblings live only for pleasure and in particular for the pleasure of treating their less scheming or less clever acquaintance as pawns in their power-games. Henry does not get his way with Austen's staunchly Christian heroine Fanny; but he does seduce - and abandon - the foolish Maria Bertram, who lacks any moral compass. His methods of seduction are on display in the early chapters of the novel; they bear a strong resemblance to the self-congratulatory progress of Valmont as he goes about seducing the virginal and not very bright Cécile Volanges.

It is tempting to think that Austen must have read Les Liaisons dangereuses, published in France in 1782 and in an English translation, Dangerous Connections, in 1784. But as Austen biographer Claire Tomalin points out, "Its cynicism was one thing; its outspoken sexual element quite another" (Jane Austen: A Life, 1997, p. 82). The publication of the translation led the Monthly Reviewto exclaim against the corrupting potential of its "scenes of seduction and intrigue" while admiring the "great art and skill" of the execution. In fact Laclos was simply adding French salaciousness to an English model, Samuel Richardson's Clarissa, or The History of a Young Lady(1748). In this immensely long novel-in-letters the virtuous heroine Clarissa is pursued and eventually imprisoned and raped by the villain Lovelace, who subsequently dies in a duel. Clarissa expires, like Mme de Tourvel, of despair and shame. Laclos knew and admired this extraordinary novel, as did many readers in Europe. It is even known to the characters of Les Liaisons dangereuses: Valmont mentions it familiarly to Merteuil; Mme de Tourvel, tempted by the unknown realm of passionate desire, takes up Volume 1 of Clarissa rather than the devotional books that are her normal fare.

Richardson's novel is the most striking example in English of the cultural fascination with the Don Juan figure. From the court of Charles II, to the many examples of charismatic but heartless rakes in Restoration and eighteenth-century drama (Lothario in Rowe's 1703 tragedy The Fair Penitentis another iconic example), Protestant middle-class England mined a rich vein of fantasy. The libertine represented the fascinating but dangerous rule-breaker, the member of society who refused to live in accordance with what he would describe as its hypocritical standards. As the ideals of the Enlightenment, and particularly its rejection of "superstitious" religion in favour of Reason - which often seemed to coincide with the uninhibited pursuit of pleasure - became dominant in Europe, many a  gentleman thought himself free of the obligations of social responsibility towards the weak and helpless which the Church (either Catholic or Protestant) had upheld, however imperfectly. In fact many gentlemen (and some ladies, like the Marquise) enjoyed libertinism not so much for sexual gratification as for the licence to exercise their power over another's mind, heart, and conscience. As Henry Crawford in Mansfield Parkputs it, speaking of the amusement his attack on Fanny's heart will afford,

"I only want her to look kindly on me, to give me smiles as well as blushes, to keep a chair for me by herself wherever we are, and be all animation when I take it and talk to her; to think as I think, be interested in all my possessions and pleasures, try to keep me longer at Mansfield, and feel when I go away that she shall be never happy again. I want nothing more." (Mansfield Park, ch.24)

This is strikingly similar to what Valmont tells the Marquise he wants as he sets out to seduce Mme de Tourvel (Letter 6). The difference is that Austen is writing from within the certainties of the English Protestant world, whose internalised ethical and moral structures will protect the pious Fanny. In Laclos' novel, a corrupt French Catholic church, embodied in the priestly confessor, is powerless to give spiritual support to someone like Mme de Tourvel. She will despair and die, as will her seducer Valmont.

Mozart's opera Don Giovanni, premiered in 1787, a mere five years after the publication of Laclos' novel, bears the subtitle, "The libertine punished". Jane Austen did not see it in London (where it premiered in 1817), but she did see at Covent Garden, in 1813, an earlier version of the powerful myth in Don Juan, a popular ballet-cum-melodrama with music by Gluck. It was just after she had finished writing Mansfield Park. Her comment on the charismatic protagonist is unexpectedly forthright: "I must say that I have seen nobody on the stage who has been a more interesting Character than that compound of Cruelty & Lust" (Letters, 15-16 September 1813). No wonder that her "villains", such as Henry Crawford, continue to fascinate readers, just as Valmont does.

But the changes that Austen wrought when writing not only her rake characters but also her profoundly decent heroes were part of a general shift in the idea of  masculinity towards the end of the eighteenth century, and particularly in ideas about the relation between sexual desire and romantic love. What happens if the hitherto free-thinking libertine finds himself experiencing the sort of love for a woman that combines attraction with respect and care for her well-being? Nineteenth-century literature is full of young gentlemen in a constant state of  anxiety (often comical, sometimes tragic) about the conflict between their sex drive and their awed recognition of the respect that is due to genteel young women.

Fast forward to the mid-twentieth century, and Christopher Hampton's take on Merteuil and Valmont is that they are "two professionals in a world of amateurs. It's a world where no-one has to work at all because they're all so rich, but these two people have chosen a profession and got very good at it." (Interview, January 2012.) Arguably they can be seen as living in a historic precursor of the 1980s world of excess, in which the Seventies ideology of free love has become commodified into sex without love - a form of power. In particular this is a world just before AIDS revealed itself as excess's nemesis: perhaps (to extend the analogy) AIDS is the late twentieth century's "silhouette of the guillotine".

As Hampton explains, "one of the professionals stops behaving like a professional and falls in love, and this one decent instinct undermines the whole thing." The libertine in love is such a contradiction that he cannot survive in that role. Hampton persistently humanises Valmont in the latter part of his play, with stage directions about his silent expressions of shame and regret in his scenes with Tourvel. Most strikingly, Hampton has the dying Valmont request that Danceny tell Mme de Tourvel: "I can't explain why I broke with her as I did, but since then, my life has been worth nothing… Tell her her love was the only real happiness I've ever known." Jane Austen's Willoughby leaves a similarly emotional message with Elinor, the sister of the girl who almost died for his love. The post-Romantic libertine becomes, at the end of his adventures, a real person with the potential for tragedy.  Valmont's recognition that he can only symbolically atone for his earlier behaviour by allowing himself to be killed by the conventional Danceny is something that Hampton's play can show us. The final moral state of Laclos's libertine remains ambiguous.