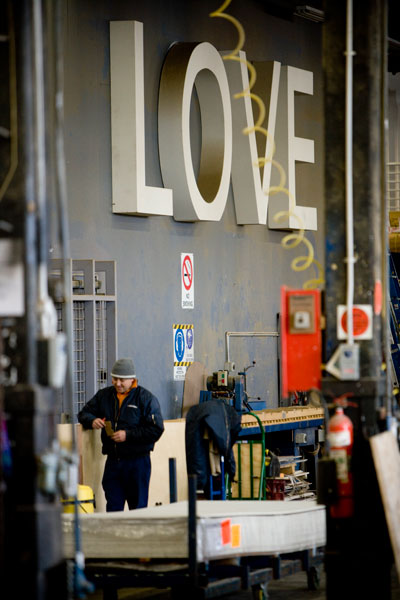 Romantic comedy, or romcom, deals in sex and love, those two similar but not necessarily identical human conditions. In romantic comedy sex and love go together. Young lovers meet and fall in love, or begin to fall in love, and the process turns into a series of absurd mistakes and misadventures, a potent mixture of farce, jokes and dreamlike fantasy. The play ends when the lovers accept the fateful power of romance. The ending is like a shared revelation for the lovers and the audience.

Part of the attraction for the audience is that it all seems so simple and inevitable. Sex, love and mating are among the most complicated human experiences - romantic comedy celebrates them in a way that allows for the complexity and everything ends in bliss, or something that promises bliss. Marriage actually.

Ancient Greek and Roman comedy established the tradition of clowns and farce.  But there is nothing quite like the kind of love in romantic comedy. In Roman comedy such as Plautus's The Haunted House(circa 210 BC) love means a special preference for one particular partner in a world of drunken, randy young men and their slave women and prostitutes.

Romance as it exists in classic romantic comedy developed under the conditions of medieval patriarchal society and Christian religiousness. With the rise of romance, love became even more special - a sudden religious mystery, an act of devotion, a ceremony, something essentially optimistic, an affirmation of the current human conditions of lifelong, monogamous domesticity.

Shakespeare is the great master of classic romantic comedy. Shakespeare picked up on the long established tradition of clowns and farce and combined it with romance. The three Shakespearean plays that define the genre are A Midsummer Night's Dream(1595-6), As You Like It(1599) and Twelfth Night(1601-2). They establish the grand Shakespearean pattern: a world of high society, wit and fashion that seems like the ordinary world; extraordinary fun and games; a strange combination of knowing comedy and innocence.

Another basic characteristic Shakespeare defined is that while it is all about the power of sex and love, and the ending looks forward to the wedding night, and might even seem like an act of sex in a dreamy and magical way, no one has sex in classic romantic comedy, or rather, the two young lovers do not have sex.

In A Midsummer Night's DreamHermia and Lysander decide to run away to the woods of Athens because her father wants her to marry someone else. But they go to the woods on midsummer's eve, a time associated with pagan rites and carnival. What follows is a wild exploration of romance and its absurdities - sudden changes about who loves who, violence, low jokes and strange wisdom found in bizarre fantasy. The high and beautiful fairy queen falls in love with a clown who has been transformed into an ass and who is something of an arse, and called Bottom. When he wakes from his adventures Bottom says, 'I have had a most rare vision' and that it is 'past the wit of man'.

After the libertine Restoration period, the 1700s saw a return of romantic comedy. Love mattered more and women began to gain more power within the patriarchal marriage system.

Oliver Goldsmith's She Stoops to Conquer; or, The Mistakes of a Night(1773) is one of a series of later variations on Shakespeare's night of dreamlike mistakes. Young Marlow has a problem. He is experienced with women of the lower orders but goes to pieces with women of his own class. He meets Kate Hardcastle when she is dressed as a lady and fails to even look at her properly. Later he recovers his manhood when she allows him to mistake her for a servant girl. But romcom forgives and forgets, and celebrates the silly side of sex and romance.

After Shakespeare Jane Austen's Pride and Prejudice(1813) is the next great version of classic romantic comedy. Austen was aware of change and a dark side to romance. Like Kate Hardcastle, Elizabeth Bennet is a strong, intelligent and clever young woman aware that she is confined by traditional social codes and conventions and in some ways ready for revolutionary change. With Bingley Austen added a romantic villain, almost Gothic in the context. Bingley certainly has sex, and in an irresponsible and opportunistic way.

The second half of the nineteenth century saw widespread changes in belief and the onset of radical change to romantic comedy that has continued to the present. Romance transforms the basic human conditions of mating and procreation that keep the species going. On the Origin of the Species(1859) redefined romance and romantic comedy.

The new directions were signaled by Oscar Wilde's The Importance of Being Earnest(1895) and George du Maurier's novel Trilby, first published in the same year. Trilbywas adapted for the stage, became a smash hit in London, New York and across Europe, and eventually became a film. Trilbyturns romantic comedy towards dark sex and tragedy.  The story is set in Bohemian Paris (as in La Boheme(1896)) where Trilby is an artist's model and a fallen woman. Abandoned by Little Billee she is taken up by Svengali, a dark, satanic lover with strange hypnotic power. Like Bram Stoker's Dracula(1897), Trilby answered to new stresses and strains in the history of sex and romance.

From the early twentieth century to the present new versions of romantic comedy have flourished in the new conditions of radical change in religion, marriage, sexual codes and the status of women.  As romantic comedy becomes romcom the comedy is darker but still optimistic. As the religious framework falls away, like Christmas, romance becomes even more magical. Recent romcom is one of the great mediums for a contemporary sense of wonder.

One of the great classics of the last hundred years is The Philadelphia Story, which appeared first as a Broadway play (1939), written by Philip Barry. The play became the classic movie, The Philadelphia Story(1940) and later transformed into the film musical High Society(1956)). The Philadelphia Storyis another imitation of Shakespeare's mistakes of a summer's night. In the film version Katharine Hepburn as Tracy Lord is a high society divorcee like a modern love goddess, or fairy queen, and about to marry for the second time. The events of the night before the wedding include that she might have, or definitely has not, or again just might have had sex with a drunken, working class reporter, Macaulay Connor, played by James Stewart in a performance as a decent and randy young drunk good enough to have impressed Plautus. At the last moment, she walks down the aisle to remarry her first husband, C. K. Dexter Haven, played by Cary Grant.

Recent romcom reflects the current mass culture age of digital technology, sexual freedom, condoms, gender equality and relative lack of censorship. The lovers tend to be older and more experienced. Many characters have sex, whether they are married or not. One way to say it is that there is a lot of shagging in recent English romcoms. There is also an element of pragmatism, considerable disillusion and the setting tends to be more or less real. The cinema has been a major force. The major successes of the last ten to twenty years include When Harry Met Sally(1989), Notting Hill(1999), and the Jane Austen imitations Bridget Jones's Diary(2001) and its sequel, in which the Hugh Grant character makes Jane Austen's villain Bingley look like a nun.

Romcom is one of the most popular genres of contemporary global culture. While there is an emphasis on the dark side (including a revival of vampires), the new transgressive, hybrid versions shaped by global television, cinema and popular music continue to explore the mystery that brings lovers together at the end in a moment of celebration and heartbreak. The ending when the lovers accept the power of romance is still a strange kind of revelation, as Bottom said, 'a most rare vision', even if at times it can seem even harder to understand and the modern urban world is very different to the pastoral woods of Athens.

Romcom gains from continuing renewal in the theatre, where there is a strong sense that the tradition includes Shakespeare as well as Hugh Grant and Bridget Jones. David Greig and Gordon McIntyre's Midsummer [a play with songs] (2008) renews the romcom tradition with experimental theatricality, songs and a challengingly different pair of lovers who share a lost weekend in Edinburgh. Midsummertakes romcom further into the contemporary world of social crisis and dark questions about identity and survival.