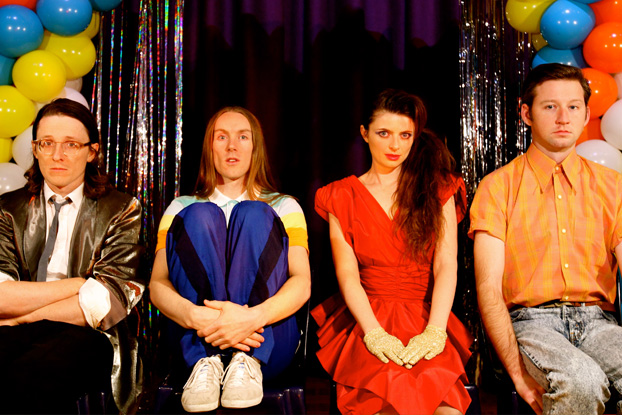 I grew up watching John Hughes movies. The Breakfast Club, Ferris Bueller, Sixteen Candles, Weird Science(probably his most questionable film…) to name but a few. They were pretty cool, especially to me in the 80's. Me and my brother and sister would rent them out on VHS and watch them over and over, quoting the lines and totally falling in love with the worlds that were peopled by geeks, dweebs and losers.

I'd always felt that it was okay to be one of those guys in his films. The characters were always troubled on the inside, but at the end of the day they would still be okay. They would have grown a little, the jocks would respect them a little more, and maybe to the girls they wouldn't be so invisible anymore. The framework of his storytelling and the metaphors he used for growing up seemed to ring true to me. A little American, and a little sugary sweet, a little too idealistic but nonetheless they struck a chord.

School Dancefor me was born out of the memory of what it was like to be a teenager. What it was like to lose myself in fantasy worlds, and find friends who would lose themselves in these worlds too. Where you'd imagine you were someone tough, or someone cool or maybe even someone confident. And while on the surface you may have been obsessed with He Man and She Ra, Gremlins and Dr Who, or even Molly Ringwald in those John Hughes films, underneath it all you were really just trying to come to terms with who you really were, and where you think you might belong in this world.

Those big questions that seem to nag a little harder when you're 15, but still keep coming back to all of us at any age.