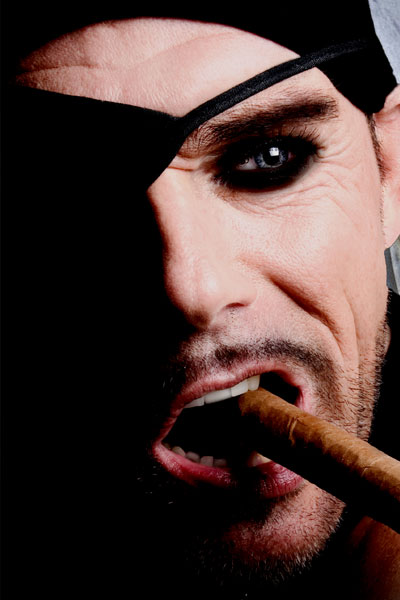 To celebrate International Talk Like a Pirate Day on 19 September (and our upcoming production of The Pirates of Penzance), here we share a short guide to talking to language of the seas...

Avast!- Stop and give attention. It can be used in a sense of surprise, "Whoa! Get a load of that!" which today makes it more of a "Check it out" or "No way!" or "Get off!"

Aye!- "Why yes, I agree most heartily with everything you just said or did."

Arrr!- This one is often confused with arrrgh, which is of course the sound you make when you sit on a belaying pin. "Arrr!" can mean, variously, "yes," "I agree," "I'm happy," "I'm enjoying this beer," "My team is going to win it all," "I saw that television show, it sucked!" and "That was a clever remark you or I just made." And those are just a few of the myriad possibilities of Arrr!

Beauty- The best possible pirate address for a woman. Always preceded by "me," as in, "C'mere, me beauty," or even, "me buxom beauty," to one particularly well endowed. You'll be surprised how effective this is.

Bilge rat- The bilge is the lowest level of the ship. It's loaded with ballast and slimy, reeking water. A bilge rat, then, is a rat that lives in the worst place on the ship. On TLAP Day - A lot of guy humour involves insulting your buddies to prove your friendship. It's important that everyone understand you are smarter, more powerful and much luckier with the wenches than they are. Since bilge rat is a pretty dirty thing to call someone, by all means use it on your friends.

Bung hole- Victuals on a ship were stored in wooden casks. The stopper in the barrel is called the bung, and the hole is called the bung hole. That's all. It sounds a lot worse, doesn't it? On TLAP Day - When dinner is served you'll make quite an impression when you say, "Well, me hearties, let's see what crawled out of the bung hole." That statement will be instantly followed by the sound of people putting down their utensils and pushing themselves away from the table. Great! More for you!

Grog- An alcoholic drink, usually rum diluted with water, but in this context you could use it to refer to any alcoholic beverage other than beer, and we aren't prepared to be picky about that, either. Call your beer grog if you want. We won't stop you! Water aboard ship was stored for long periods in slimy wooden barrels, so you can see why rum was added to each sailor's water ration - to kill the rancid taste. On TLAP Day - Drink up, me hearties! And call whatever you're drinking grog if you want to. If some prissy pedant purses his lips and protests the word grog can only be used if drinking rum and water, not the Singapore Sling you're holding, keelhaul him!

Lubber- (or land lubber) This is the seaman's version of land lover, mangled by typical pirate disregard for elocution. A lubber is someone who does not go to sea, who stays on the land. On TLAP Day - More likely than not, you are a lubber 364 days of the year. But not if you're talking like a pirate! Then the word lubber becomes one of the more fierce weapons in your arsenal of piratical lingo. In a room where everyone is talking like pirates, lubber is ALWAYS an insult.

Smartly- Do something quickly. On TLAP Day - "Smartly, me lass," you might say when sending the bar maid off for another round. She will be so impressed she might well spit in your beer.

For more tips for talking pirate, go to www.talklikeapirate.com