Feature: The Taboo of Sadness 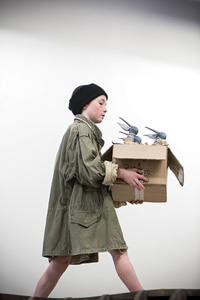 The notion of taboo conjures up the extremes of a society, those dangerous, illegal or private pursuits (violence, drug use, sexuality) which we as a population know exist, but which we find difficult to discuss, whether onstage or off.

But there's another form of taboo, which works in antithesis to this. It is a taboo conjured around a very common, very known aspect of our world. It occurs when we take something normal, a basic emotion - sadness - and we present it theatrically. And of course there can be no danger in this, because we are not dealing with dangerous things… unless we shift the context. Unless we present that emotion to a people we are scared of showing it to. We present it to children.

In this act, a switch occurs. The thing presented ceases to be the taboo - the shock to an adult sensibility lies no longer in what is presented on stage, but rather what sits in front of it. The children watching the sadness - they have become the taboo.

So, therein lie three bones of contention: the sadness presented to children is foreign; if not foreign, then too challenging; and if not too challenging, then just unnecessary.

In my works, and in the works of many of my contemporaries (though, I would argue, as absent from the works of many more), a multitude of themes coexist - those of discovery and loss, failure and redemption, unbridled joy and unbounded anger, new life and untimely death. Some are positive and some negative.

In some of my plays, through one set of horrifying circumstances or another, a child will find themselves alone - or at least devoid of elders. And the events that have led to this state of affairs aresad. Sadness has entered the story. But something more rudimentary has also occurred in this: the child - that bastion of 'innocence', the recipient of 'mothering' - is suddenly without a mother. Indeed, they are without an anyone.

And in this position - they are truly the protagonist. They are not necessarily heroes yet (just for having been abandoned), but if a hero were to emerge, it would surely be them. And this is the point - no definable traits come about due to their sad event. All that is set in place is a spotlight. Whatever happens, they will be the focus, unprotected from the 'slings and arrows'. They may become carer or coward or victor or fallen, but whatever occurs from here, it is to them that the task of navigating falls.

This is a short extract from a longer essay published in the program for Storm Boy, which is available at Box Office and The Bar for $10.