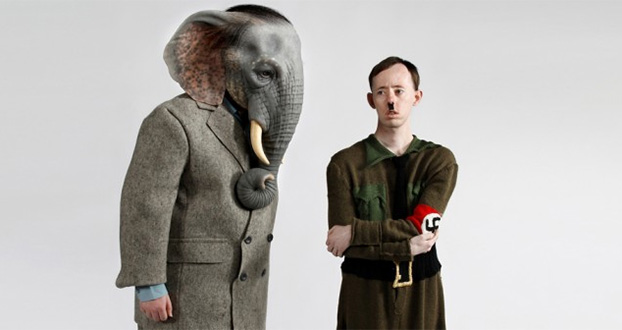 It's two hours until Ganesh Versus the Third Reichopens at Paris's Grande Halle de la Villette and artistic director Bruce Gladwin is rallying the cast for a warm-up soccer match behind the stalls. Nearby, black-clad stagehands vacuum the sparse set and tape electrical cords to the floor of the stage that has already seen a dress rehearsal today, before an unexpected audience of critics from Le Monde, Libérationand Time Out Paris. Executive producer Alice Nash is mildly apprehensive about the inevitable reviews. "It went fine, but we would have done things differently if we'd known they were going to be there," she says.

When a handful of artists started a theatre workshop for people with intellectual disabilities in Geelong in 1987, none would have anticipated it reaching these heights. But Back to Back Theatre has flourished under Nash and Gladwin, its director for 15 years, to become an award-winning ensemble that is this year doing four international tours, a four-week run at the Sydney Theatre Company, three weeks at Melbourne's Malthouse Theatre, and devising new work.

Nash, who is from Canada and has an accent to match, is sipping tea from a paper cup backstage. Since joining the company in 2000, she has shared Gladwin's aspiration to take their "ruthlessly contemporary art" overseas, ambitious as that seemed for a small group from regional Victoria that only put on one show a year. "I just said, 'Oh, we'll tour to New York, London, Paris and Tokyo,' and people thought I was completely insane," she says. "We've now made it to everywhere on that list except Tokyo, and Ganeshwill go there this year."

Up the back of the capacious playhouse, the kick around disintegrates as show time approaches. Actor Simon Laherty, a slight, angular young man, reaches for the ball, winces and then quietly takes a seat on the sideline. Gladwin checks he's not hurt then heads backstage. Before long, the only ones really going for it are Gladwin's young son, and actor Brian Tilley, his tread heavy in rubber sandals. The score winds up 3:2. Tilley isn't happy. "I hate losing!" he snarls, swinging an exaggerated punch at a wheelie bin-cum-goalpost. Then he straightens up, composed. "That was me having a tantrum."

The unlikely storyline in Ganesh Versus the Third Reichoriginated with two actors who have since left the company. One was obsessed with the elephant-headed god; the other transformed herself into a neo-Nazi during a rehearsal. Nash says the ensemble has a free-form approach to writing. "When we start to get into a work, a lot of the content is recorded or videoed and most of it just falls completely on the floor. Little bits of gold that surface to the top are worked upon."

Three years of improvisation, research, discussion and imaginings resulted in a chimerical narrative about the Hindu deity travelling to Germany to reclaim the swastika, an ancient Sanskrit symbol, from the Nazis. "We sat on that storyline for about a year, thinking there is no way that a small theatre company from Geelong made up of six actors with intellectual disabilities can re-write European history, touch on issues such as the Holocaust, the T4 program, represent a Hindu god on stage or a Jew on the run," Nash says. "And then we decided that was a really good reason to make the play - that we thought we couldn't make the play." The secondary storyline, a fictionalised autobiography of the ensemble writing the play, came later.

Ultimately, it's Gladwin who pulled the disparate pieces together to form Ganeshbut he is just one of ten "devisors" listed in alphabetical order in the program and Nash is quick to emphasise that the award-winning play was a collective effort. "People often ask who wrote the work and did the actors reallywrite it, and in some ways, Ganeshis an answer to that question. I can tell you, they really wrote it. Bruce is really great at preserving what they bring to the process and making sure that what comes to the process initially is from them."

Scott Price, a chestnut-haired 26-year-old in jeans and skate shoes, swivels on an office chair backstage. A member of the ensemble for six years, he is deeply offended by skepticism about the capacity of people with intellectual disabilities to create quality theatre. He recounts an incident from a post-show forum in which someone from the audience asserted that those peoplecouldn't possibly have written the play he'd just seen. Price felt belittled. "I think I grabbed the mic and said 'Get the hell out of my auditorium,'" he says. "It was a great injustice. I felt we were discriminated against and quite reduced." That's not to suggest that the subject of impairment is off-limits. "I have a dual disability: autism and Tourette's… and I have to say, I think disability should be celebrated." But not every one of the four ensemble members who act in Ganeshidentifies as having a disability, he says.

Outside, it's sprinkling and the road is glossy in the streetlights. People file into the foyer folding wet umbrellas, shrugging off jackets, flinging kisses and greetings in French and English. The ensemble members don costumes and get miked up; another night, another show.

There's an arresting quality to the figures traversing the stark set, these performers whose unconventional physiques and manners of bearing have their own dignified equanimity. Their lapses in enunciation or, in Mark Deans's case, lack of speech, only compel the audience to watch and listen more attentively. That the only "non-disabled" actor on stage, David Woods, is uncommonly athletic creates a point of contrast. Disability is impossible to ignore; the dialogue sees to that. Laherty plays an autistic Jewish boy; Woods, as Dr Mengele, exclaims his fascination with "the abnormal: birth defects, dwarfs, mongoloids, degenerative conditions". At one point, Price accuses Deans of having the brain of a goldfish. Deans nods vigorously in response and makes swimming motions with his hands, his reassuringly humorous retort permitting the audience to laugh with him. It's a scene that Nash says came verbatim from the rehearsal room, but whether the exchange is grounded in reality or was a gold nugget of improvisation is unclear.

The most confronting moment of the evening comes when Woods, playing the director, accuses the audience of being perverts. "You've come to see some freak porn," he says. People freeze in their seats. In that instant, the fourth wall is unexpectedly breached and we are forced to examine the attitudes and expectations that brought us to this spot, our prejudices and morality. It is the actors who have exposed themselves to the scrutiny of our gaze, yet we are now impelled to turn the spotlight on ourselves. And then, just as swiftly, the breach is repaired: Woods, turning back to the ensemble, explains that he was issuing a challenge to the imagined empty seats in their on-stage rehearsal studio. The audience's relief is palpable.

After the show, people gather for drinks and canapés in a corner of the theatre. "It was very interesting… I'll be thinking about it for a while," one woman says to her companion. "I think you have to judge it by the same criteria as any other art," says another. Someone else ponders whether the actors' disabilities allow them to present more "honest" versions of themselves on stage.

The ensemble members emerge to enthusiastic applause. They are reserved save for Price, who whoops and punches the air above his head, rock star-style. As the champagne flows, a tall man in a sharp suit introduces himself to Tilley as the president of the theatre. "When I saw the show in Melbourne, I knew we had to bring it here," he says. "Tonight it was even more powerful." Tilley thanks him and leans forward conspiratorially. "To tell the truth, I had a stomach ache. I ate and thought I'd digested so I played soccer, but I hadn't," he confides. "I thought I was going to vomit… but I just kept calm." The president chuckles and shakes Tilley's hand. The next day, the reviews come out. Nash needn't have worried.

This article was originally written for Arteryand is reproduced with permission.