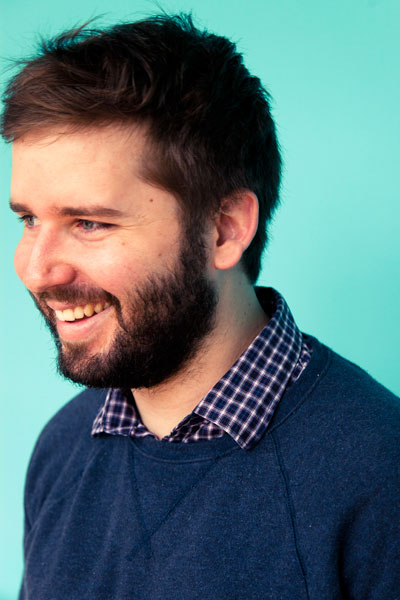 How did you get into theatre directing?
Directing is something that has emerged over a long period of play. As a child I would coerce my siblings, cousins and friends into putting on puppet shows or little plays for anyone who would watch. As I grew older, I was taken to the theatre quite a lot. At school I found Shakespeare and then Beckett, and my friends and I took the school play very seriously. Things began to crystallise when my high school drama teacher encouraged me to direct a play I had written. After spending most of my time at university locked away in the Cellar Theatre doing SUDS (Sydney University Dramatic Society), I spent two years as a directing student at NIDA where I was given a lot of freedom to experiment.

What qualities are important for a theatre director?
There are two central acts that I see a director engaging in, each requiring different qualities. The first is the artistic act of interpreting and fashioning ideas to be communicated to an audience. Like any artist, the director needs to be vulnerable and generous in this act, whilst possessing a rigor and clarity, as well as a capacity to collaborate. The director's commitment at all times should be to the experience of the audience. The second is the act of developing these ideas in a rehearsal room with a cast, crew and creative team. A rehearsal room can be like a micro-society, requiring a director to ultimately possess leadership that is open to the creativity and potential of all.

Which directors do you most admire?
I admire those directors whose work invites our imagination onto the stage and whose work grants us access into that about and within us which is unresolved, in turn inviting us to resolve it. Some include Robert Wilson, Pina Bausch, Peter Brook, Thomas Ostermeier, and the filmmakers Lars Von Trier and Sally Potter.

How do you develop your skills as a director?
The best way for a director to develop is to constantly direct. Reading plays and seeing lots of theatre is useful as it puts you in conversation with what has and is being made. I acted a lot at school and university, as well as writing, rigging and designing the lights, designing sets, and running Front of House. Having some firsthand understanding of all the facets of theatre making helps in the ultimately collaborative role of directing. I have also been lucky to assist for some great directors, including Benedict Andrews, Richard Cottrell, Andrew Upton and Jim Sharman. Assisting offers the opportunity to engage in conversation with a great theatrical mind, whilst witnessing a director enact their craft at the highest level. It has also given me an eye-opening chance to see the evolution of a show from preproduction conversations all the way through to the closing night on the Sydney Theatre stage.

What was it that drew you to Romeo and Juliet?
It's a play that cracks open the period in your life where for the first time you begin to develop a critical perspective on the adult world about you. The central characters in it are not cynics, they are idealists, and I love that about them. There is a purity in their pursuit of life which is deeply infectious. The beauty of the play is that it reconnects us with our inner idealist and places us inside the turmoil of the very first choices we make in our adult lives.

What are the challenges you face in staging such a classic work?
The difficulty of staging such a famous play is also its blessing. Nearly everybody who comes and sees Romeo and Julietknows something about the story. Many know it intimately. In staging the play you have the great challenge of needing to find new ways to get audiences to reconsider what the play might mean to them. The blessing is that the understanding the audience brings to the play means you can examine it in a far more complex manner than were the audience simply trying to follow a story they'd never heard.

What's the world of this production of Romeo and Julietgoing to be like?
Designer David Fleischer and I are constructing a world of excess, a world of indulgence, and a world bereft of authenticity. Ultimately, it is a world that brings with it values and expectations these two very intelligent and critically engaged young people find deeply suffocating. It is a universe where, even before meeting each other, Juliet and Romeo are looking for a way out.