Feature: The Clubs of Berlin, Part 2

In honour of M.Rock, we asked inveterate traveller, writer, urbanist and dance-fiend Jana Perkovic to give us an insight into the Berlin club scene. In this second instalment, Jana analyses how Berlin's clubs resonate through the city's culture today. You can also read Jana's first piece on the history of the club scene. 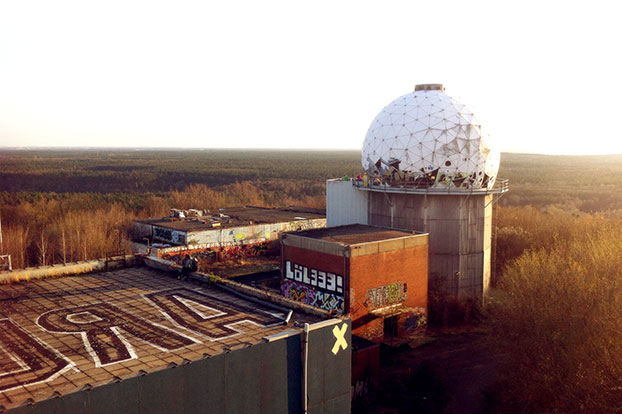 THE ADVENT OF BOBOS

Berlin is changing. Without industry, its main export has become its own cool: the sheen of 'poor but sexy' it lends to any creative enterprise. Berlin's enormous cachet now draws in Canadian hipsters, American DJs, Australian graphic designers, just as it once brought in anarchists and squatters. But what young expats, moving to Berlin for low rents and high hip factor, don't understand is the city's radical left legacy. Years of social experimentation have brought in a fierce appreciation of freedom over comfort, of transgression over the hip.

It makes Berlin a genuinely strange place. Every big-ticket redevelopment plan has been attacked as a cynical attempt to capitalise on Berlin's brand. The creative class is decidedly unwelcome, as is the 'Easyjet set' of weekend visitors. In 2011, a guerrilla campaign arose overnight, telling tourists "Berlin liebt dich nicht". When BMW Guggenheim Lab chose Berlin as a station in its travelling program in 2012, the location had to be changed due to bona fide threats of torching.

While there is again glamour in Berlin, from the chichi shops of Mitte to the renovated Potsdamer Platz - no longer the field of grass through which Wenders' angels walked - there is none of that old, settled money that inhabits the centres of Paris, Vienna or London. Berlin is still a new city, a young city, a place that has turned its population twice over in an average human lifetime; it is overpopulated with the unemployed, the post-radicals, the squatters who are now starting families in their communal households. You can sense it in the streets, unmistakably, hours within arrival: money has no social status here. Op-shop chic is the norm. Flea markets abound. Everyone has a lot of time. Brands of bikes are not a topic of conversation. Nothing before 3am counts as 'going out' proper. The whole city, it sometimes seems, has been structured around the needs of the unemployed. 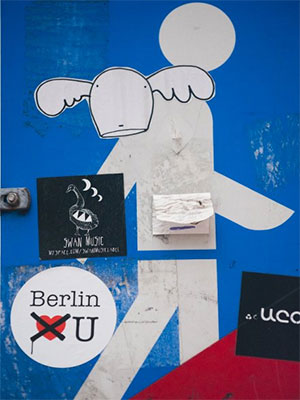 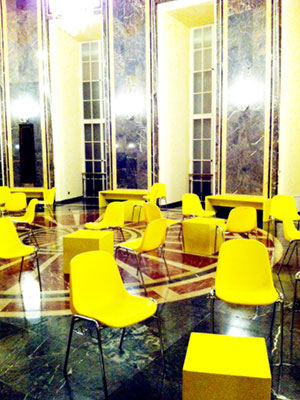 Clubbing - Berlin's enduring main hobby - still epitomizes the city's lack of prohibitions and structures. Clubbing here is both excessive and inclusive. The best DJs in the world every night of the week, parties that last for days, every illicit substance, freely available sex - and even club prices cater to the unemployed. Entry is never predicated on either money, fame, nor fine clothes, but on exuding one of the many accepted variations on shabby, relaxed, tolerant, and here to dance. Sven Marquardt, bouncer at Berghain - considered by many the best existing club in the world - and a veritable celebrity in his own right, often speaks of his role as 'curating a good party'.

In the elastic days of the early 1990s, the law-breaking ways of the political outcasts provided a playground for three distinct groups in search of freedom: new Berliners like Tobias Rapp, gays and East Germans. Their various flavours of ecstatic abandon - hard drugs, darkrooms, minimal techno - have shaped the very mainstream of Berlin clubbing. In recent years they have been met on the dance floor by another group: wide-eyed tourists. A good party has come to be defined by a fine balance between the different sensibilities they bring to clubbing: the visual richness of the queer party scene, the physical dedication of the locals, the good musical taste of the new Berliners, the sheer enthusiasm of the tourists.

The ritual of the weekend party has something sacred to it. The whole city meets in a liminal place, shaped by liminal desires, where all normality will be suspended for a while. Decor is minimal, and one goes out dressed in one's worst clothes, that will weather the hours of smoke, sweat and condensation dripping from pipes. It is no great loss that most clubs forbid photography and many remove all mirrors. For hours, or even days, a door opens in one's weekend into a carnivalesque space that promises no judgement, no structure and no haunting evidence. 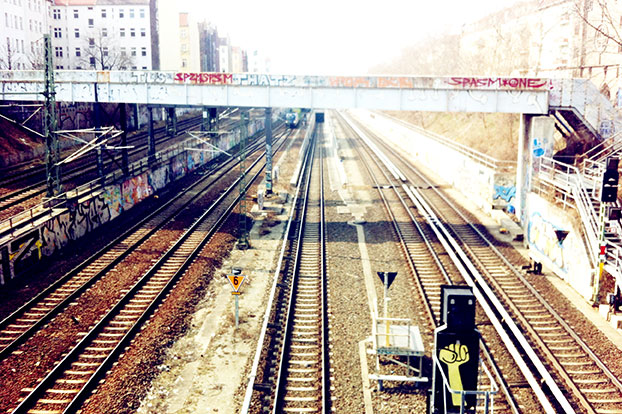 It is joyous. There is still space to experiment - the city is still a million people short of its pre-war population of 4.2 million - and clubs are everywhere. There is Weekend, on the top floor of an operating office building on Alexanderplatz, where, as you leave in the morning hours, you may just brush past the cleaning ladies. There is Salon zur Wilden Renate, occupying an entire apartment building. There is Stadtbad Wedding, in a neighbourhood swimming pool. There are Bi Nuu and KitKatKlub, in metro stations; Golden Gate, under a train bridge; RAW, in squatted rail yards; former Bar 25, built by hand from timber offcuts on vacant land belonging to the waterworks. There is Kater Holzig, with its own upmarket restaurant and all-night wood-fired pizza. There are illegal parties known only through word of mouth, such as the one that happens, without fail, every Friday night in the foyer of Schlesisches Tor train station. There are costume parties, sex parties, queer parties, rockabilly parties, spontaneous parties, parties with theatre and circus performances and parties where, not far from the main dance floor blazing minimal techno, there will be a tiny room playing Billie Holiday. The most famous of Berlin clubs, Berghain, is connected to a gay fetish club and thick with darkrooms. As confronting an experience as it may be, it makes clubbing a particularly communal event, inclusive and democratic, like a village fair. The dental nurse, the marketing student, the Parisian visitor and the second-generation Turk will all inevitably meet in the queue for the unisex toilets.

If clubbing is where Berlin is most itself, the rest of the city is an extension of the weekend, not its contradiction. By historical accident, the clubbing spirit - ecstatic, utopian - has grown to be the spirit of Berlin. While there are micro-utopias everywhere in the world, Berlin has attempted to be a utopia in the shape and size of a city. It offers no prohibitions and very little structure. Here, it is entirely possible to get a ton of sand from a construction site and make a beach bar in the middle of the city. Here, summer means sunbathing naked in public parks and winter group outings to the sauna. Here, clubs double as neighbourhood flea markets, children's playspaces, community meeting rooms. Here, DJs cruise the streets with sound systems mounted on their bikes, playing sets wherever a dozen people can find room to dance. Here, hundreds of strangers meet on Sundays to sing along at an open-air karaoke run without a permit. Here, a former US spy station is now a beloved destination for picnics, parties and kite flying. Here, in summer, the sun sets at 11pm and rises again at 4. Here, you have to know how to set your own limits. 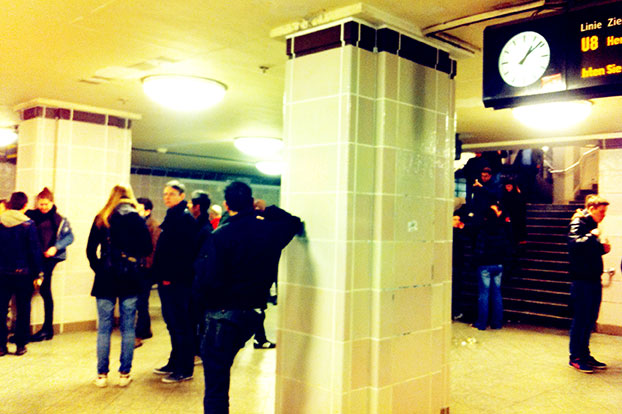 'HERE, YOU DON'T HAVE TO STOP'

Everyone goes a bit crazy in Berlin when they first arrive, consumed by the game of 'how much fun is it possible to have at once?'. But nobody seems to go as crazy as Australians go crazy. This was remarked upon by a few of my friends, as we watched yet another Australian friend disappear into a week-long bender immediately upon arrival. They would later emerge dazed, unsettled by the lack of ensuing reprimand, as if their partying were a product of inertia, rather than will.

It must say something about Australian social structures that the low level of overt prohibition in Berlin seems to inspire trauma more than happiness. Despite the high number of Australian artists that call Berlin home, the prevailing narratives of the city are often ominous, tortured, weary. In Melanie Joosten's novel Berlin Syndrome(tagline "an Australian photographer fails to blossom during her time in Berlin"), a German man keeps his Australian lover imprisoned in his isolated apartment, as if to illustrate the perils of the city's lack of normal. In Lawn, a performance piece by Brisbane dance company Splintergroup, winter in an East Berlin apartment becomes a nightmare of Kafkaesque intensity, eventually attenuated only with an enormous image of a Queenslander under the big blue Queensland sky. In November 2012, Robert F. Coleman wrote a strange (and much derided) article in The New York Timesin which he blamed an extended stay in Berlin for the artistic failure and subsequent break-up of his band. According to his analysis, in comparison to Melbourne, the city was too easy to live in and the absence of rat race made their ambition atrophy. Without a compulsion to work, their life became one long, mindless party. Coleman wrote, horrified, how the rehearsal schedule broke down because, at midday, many band members had not even gone to bed yet. "In Berlin, you never have to stop", was his conclusion.

Such narratives belie a naïveté about how Berlin works and an ignorance of the many normal lives that go on around the shell-shocked visitor. Despite its many freedoms, Berlin is not anarchic, because it is - despite popular belief - still in Germany. The invisible secret to much of its laissez-faire safety regulations is that most Germans have personal public liability insurance. Step outside of a 72-hour party and there are street cleaners and reliable public transport (the photo above was taken just after 1am on a typical Wednesday evening). Trained medical staff are at hand and the naked man getting walked on a dog leash probably works as a social worker or accountant. Berlin is regulated by Protestant self-moderation. Sure, you could go wild every night of the week, but how much of it do you really want? And here is, ultimately, what separates the Berlin survivors from the Berlin victims: it is less the ability to let go, than the ability to find themselves again after they emerge back into reality - be it at dawn, lunchtime, or evening the next day.