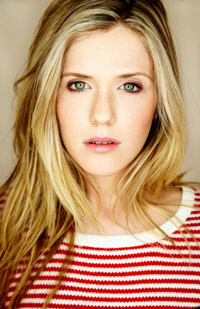 What were the most enticing aspects of Machinalfor you when you were offered the role of the Young Woman?

A job. A job is good. Also the fact that Imara wanted me for it made me feel like it was something I should do. When someone believes in you and asks for you it's intriguing and humbling and instantly sparks your curiosity, because they've already decided you can do it. And then, when I read the script, I thought, "Oh my, that terrifies me; I better do it".

Has this shifted at all now that you're in the midst of rehearsals?

Yes and no. Still a job. Still terrified. What has shifted is my idea of a person going through a nervous breakdown. I mean lots has shifted. But that's a big one. "Crazy people" don't act crazy a lot of the time. So yeah. That's shifting. I hope I get it right.

The role that you play is the heart of Machinal and in every scene. How do you handle such an emotional roller coaster as an actor?

I think with humour? Offstage obviously. The only way to get through a role like this is to not take yourself too seriously or stare too far down the rabbit hole in your own time. I'm not sure what my secret will be once we start it in performance, I suspect some more humour, a lot of focus, good sleep and probably a glass of wine with gentle people after the show.

The play is some 90 years old now. Has it been easy to relate to?

Completely. Very easy. My aunt is 99 and I can relate to her completely. Shakespeare's plays were written in the 1500s and they are on every other day - this is completely relatable. In the first scene, Young Woman describes how claustrophic the train is and how she just had to get off it or she would faint. It's completely current in so many ways. The only thing that puts it "in a time" is just how repressing the world is for a woman. Our society has come a long way since Treadwell wrote this, there's still a way to go, but we have come a long way in terms of women's roles and submission, and that's the main point of difference between the world of the play and Sydney 2013.

What do you feel audiences will take away from the production?

This is something that really matters to me with this play because without spoiling anything, things don't go greatfor Helen Jones, so I am trying to work out what it is the audience will be left with and I hope it is more than feeling a bit depressed. I hopethat they will open up a little more to people in crisis. If somebody is crying on the bus, our reaction as a society is to ignore them because "that's too much to handle" or even in our lives when people we know are clearly distressed we sometimes don't ask enough. It's a bit like that R U OK? Day that Australia has now. I want the message to be something along those lines. Reach out a hand. Let's listen a bit more. That kind of thing.