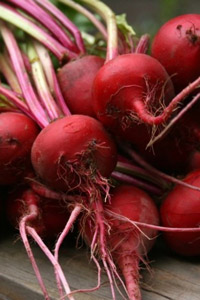 Beetroot (or beta vulgaris) comes up in conversation surprisingly often in John Doyle's new play Vere (Faith). But it turns out to be a subject worth talking about. Eaten across the globe, the humble root vegetable has been known as an aphrodisiac, a hangover cure, a test of pH levels and features in a fair few euphemisms as well.

Some of the first known recipes for beetroot can be found in Apicius, the Roman-era cookery compendium which includes two suggested preparations:

Unfortunately, the Latin has more in common with a restaurant menu than a modern cookbook recipe - there are few verbs and no measurements - so translating them into workable dishes is as much about intuition and imagination as it is about linguistics.

So, in honour of our Roman antecedents, a few of the STC staff jumped into their respective test kitchens and concocted dishes based on the Apiciusingredients. If you have a favourite beetroot recipe you want to share, post it to our Facebook wallor tweet usa link. 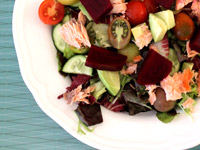 Pick up a bunch of beets from the markets and, back at home, chop off the stalks and roots. Place them in a large saucepan and completely cover with cold water. Then boil it up for about 35-40 mins, or until a fork easily slides into the beetroot.

Remove from the stove, drain and allow to cool. Peel using a small paring knife and chop into chunks. To prepare the dressing, roughly grind the mustard seeds with a mortar and pestle, mix with oil and vinegar.

I did learn the hard way, however, why many recipes recommend wearing disposable gloves when peeling the beetroots J. Perhaps they weren't available in Roman times. It was certainly easier to peel them after they'd been boiled, but I did have purple fingers for a while!

Serve beetroot with salad leaves and drizzle the dressing over the salad. Also goes well with a Middle Eastern-style lamb salad. 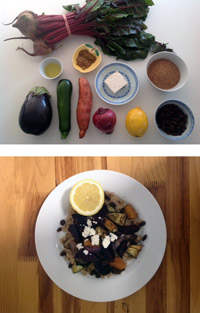 Iron Chef Greece took the first Apiciusrecipe as the starting point for a more elaborate dish of roasted vegetables with bulgur.

Preheat oven to 200°C. Prepare beetroot by thoroughly washing under cold water. Trim the stalks, leaving 5 cm on the top. Wrap in foil and roast in oven for 2 hours. The beetroot is ready when a knife can easily slice through it and the skin peels off.

Combine the chopped eggplant, zucchini, sweet potato, onion, spices and olive oil in a lined baking tray. Toss to coat. Roast for 45 minutes, or until cooked through. Meanwhile, peel and chop the beetroot.

Place bulgar in a bowl and cover with boiling water. When ready, fluff with a fork. Soak raisins in boiling water for 10 minutes. Drain and add to bulgar. Toss together the roast beetroot and vegetables with the bulgar.

Serve with crumbled feta on top and a drizzle of olive oil. 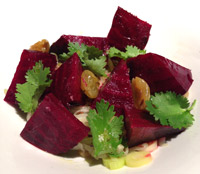 Preheat oven to 180°C. Remove stalks and wash beetroot. Wrap in foil with a few tablespoons of water thrown in. Roast in oven for 40-50 minutes, or until tender enough to pierce easily with a fork.

Meanwhile, soak raisins in a bowl of boiling water for 5-10 minutes. Lightly crush the cumin seeds in a pestle and mortar or with the base of a wine bottle on a chopping board if you're feeling improvisatory. Add cumin seeds to a hot frying pan and toss briefly until fragrant, then add olive oil and leek. Gently fry the leek until soft, you don't want it to brown. Drain the raisins and add them to the pan with the balsamic vinegar and briefly heat through.

Remove cooked beetroot from oven, allow to cool slightly and, to avoid pink hands, peel using plastic gloves (under cold water if they're still hot to the touch).

Combine the leek mixture with diced beetroot on a small platter, drizzle with olive oil, scatter with sea salt and top with coriander leaves.

If you don't have plastic gloves, put the beetroot in a recycled plastic bag and rub vigorously to peel.

The original Roman recipe calls for their traditional fish sauce (liquamen), which was accounted for in this version simply by the addition of salt. The addition of Asian fish sauce would probably lead to a more accurate Roman taste.