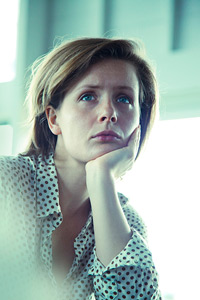 In 2013, you directed Mrs Warren's Profession at STC and in 2014 it'll be Perplex. How do George Bernard Shaw and Marius von Mayenburg compare?

At their core Shaw and Mayenburg are both playwrights who are deeply fascinated by ideas, Shaw often political, Mayenburg often philosophical. They also share an interest in comedy. Their difference is how they explore their ideas theatrically.

Of course these difference come down to many things, but most importantly the fact that they are writing from different eras. Mayenburg writes with Beckett, Albee, and Ionesco behind him. Shaw writes with them in front of him.

I would also describe Shaw's texts as more closed, and Mayenburg's as more open. This isn't necessarily a negative or positive judgement, they're simply different kinds of texts. Shaw is extremely prescriptive, he tells you exactly what he wants, how to act each line, where to put every door, which way the sun is shinning. Mayenburg, a director, dramaturg and writer, is far less prescriptive, his writing couldn't be more different; void of stage directions, open to interpretation, his works are a puzzle to be solved by a director. This comes back to my point about when they were writing and how theatre making has shifted over time.

You also recently directed another Mayenburg play, The Ugly One. What is it that attracts you to his writing?

As an audience member and theatre maker I find his sense of humour and the way he explores ideas theatrically irresistible.

What excites me is that his comedies never feel trivial or little, they explore big ideas, deep philosophical perspectives and theories through both the content of the play and its form.  It this, as well as the kind of ideas he explores that excite me.

For example, at the core of The Ugly One are questions about our modern day obsession with how we look and our need to fit in and conform. At the core of Perplex are questions surrounding our apparent shared reality and existence and whatever meaning we try to give to these things.

I think humour is the best way to deal with anything terribly depressing and confronting. For example, the notion that there is no greater meaning to our existence, how better to face and explore that hideous idea than by, at least beginning with a laugh. There' no other option really.

In short, it's comedy that makes you laugh, has depth, heart and brilliant ideas at its core.

The script is freewheeling, brainy, absurdist. Is it Monty Python meets Pirandello, or is this something else entirely?

If I had to use existing references to try and describe it might be something like this...

The great Italian writer, Pirandello, in particular the play Sei personaggi in cerca d'autore (Six Characters in Search of an Author). Stoppard's work, in particular Rosencrantz and Guildenstern are Dead, The Real Thing and perhaps The Real Inspector Hound. The Bald Soprano by Ionesco, Who's Afraid of Virginia Woolf? by Albee. Monty Python is useful with regard to the slightly "sketch comedy" quality of it. Arrested Development. Trey Parker and Matt Stone. Seinfeld (people often say what they think and aren't too ashamed of it) and perhaps some of the bleaker tones of Happiness (the Todd Solondz film) and Withnail and I. Waiting for Godot.