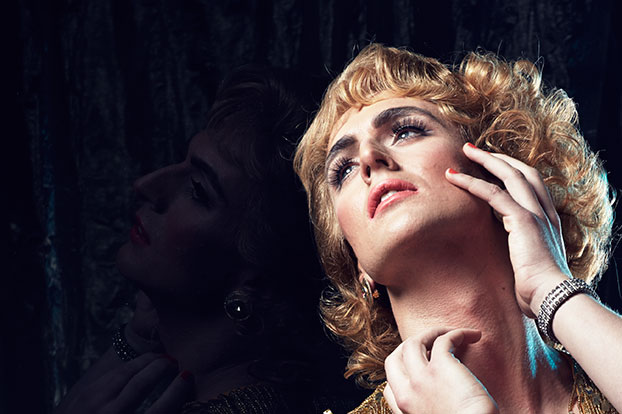 What's the most exciting thing about coming back to the Wharf 2 Theatre after 2013's Little Mercy?

You mean besides the wig department? Look, we used to perform in garages - so not having to stop rehearsal when someone needs to park their car is exciting to us. But we're also very excited to be working with national treasure Paul Capsis, as well as taking someone from our carpark days (Peter Paltos) with us to dirty up the place.

What was the inspiration for Calpurnia Descending?

Like most of our work, it came from our genuine love of these old cinematic narratives. These backstage melodramas are such fertile ground thematically and formally - full of passion, jealousy, secrets and insane women (our oxygen as a queer theatre company). But these films are also about ageing, excess, the terrifying hunger of youth - and a kind of voyeuristic glimpse at the ugliness behind a seemingly glamorous world. And this seems timely in an age where we sit at home watching Kim Kardashian hire scuba divers to find an earring she lost in the ocean.

Cinema seems to be a rich vein for you to tap into as artists. Should we be expecting Sisters Grimm movies anytime soon or is bringing the shimmering illusion of celluloid to the stage more enticing?

Well, if someone wanted to offer us $10 million to make a movie we wouldn't turn it down ($5 million? ... $1 million? ... 50 bucks? ... Anyone?). But really, we're interested in making plays that essentially fail - trying to re-create impossibly huge visions with stupidly inadequate resources. And Australian cinema is so obsessed with success and polished high-art vision - from The Wog Boy 2 to Danny Deckchair - that I just don't think we'd fit in.

Is this the first time Sisters Grimm has worked with Paul Capsis?

Yeah this is our first time with Le Capsis, but it should be noted that Ash has been stalking him for the past fifteen years or so. So, after making a schedule of his daily movements, sending threatening letters to his loved ones, rescuing a few strands of hair from his bedroom, and casting spells from Fiona Horne's Witch: A Magickal Year, it was a relatively simple process to convince him to be in our show.

Which three YouTube clips would you recommend people watch to get in the mood for the show?

James Cagney chooses a girl - is an excerpt from one of our favourite source texts, Footlight Parade (1935). This scene stood out just because it was so openly 'queer', having two men sing this love song to each other. It also features a great series of terrible auditions (a staple in these films) before we meet OUR GIRL. And what a voice, right? Ruby Keeler, that kid's got a future.

Selfish - an excerpt from Myrt and Marge (1934). The sissy archetype, another staple of the backstage musical. Sure it's reductive, offensive and politically incorrect... but they always got the best line (singular)!

Dance Moms - Jill and Abby Fight About The Bow In Kendall's Hair - A terse backstage drama unfolds when the Busby Berkeley of our time, Abby Lee Miller, has a confrontation with one of her 12-year-old dancers' mothers. The stakes are high - it's a children's dance competition in Wichita, after all.