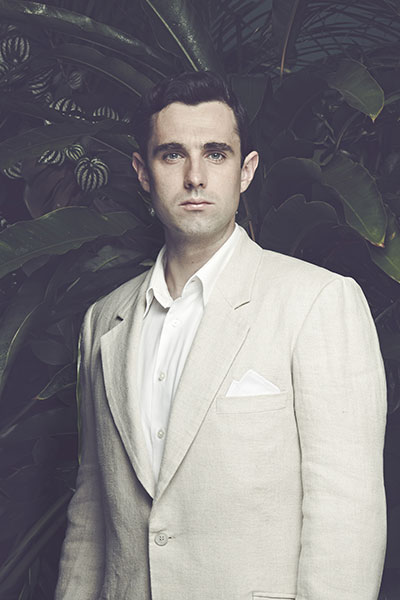 Melbourne-based actor and director Mark Leonard Winter made his debut with Sydney Theatre Company in 2014 in Lucy Prebble's The Effect. The following year, he performed in Suddenly Last Summer and King Lear, for which he won a Helpmann Award for Best Supporting Actor. In 2017, he returns to STC as the photojournalist at the centre of Chimerica.

Our Content Manager Carl Nilsson-Polias caught up with him to talk acting, high school and Jason Alexander.

You just got back from L.A. and am I right that I saw a photo of you with Jason Alexander?

Amazing. He was improvising opposite Bojana Novakovic as part of The Blind Date Project and he was so playful and funny. He'd be doing the scene and then he'd throw in this crazy vaudevillian stuff. He loved it and has been really supportive of us since - he wrote to us saying he'd really like to help us move the show to new heights. It was amazing.

You know, sometimes you have to look back and say, 'Wow, we made that show in a tiny dusty art gallery in Collingwood' and now Jason Alexander is doing it. You start making these things in these weird little rooms, like we did with 3xSisters [with The Hayloft Project], and it rolls on. Certainly that night with Jason, I fell asleep quite proud. And I guess that's the feeling that you want.

Totally. When was that first incarnation of The Blind Date Project in Melbourne? 3 years ago?

Yeah, 3 or 4 years ago. The idea was that Bojana goes on a blind date with a new guest actor each time. It's set in a karaoke bar and it's an improvised show with interactive directing from me. Bojana is the real fire behind it. We made it together and then Tanya Goldberg took over directing in Sydney. And then we shared the directing in L.A..

Above: Jason Alexander and Bojana Novakovic in The Blind Date Project, directed by Mark Winter.

So, how did all this start for you? Were you always that kid doing shows for your parents or…?

Well, two things happened. When I was in high school I was initially really into sport and then, when I was in Year 10, my dad got a posting to Washington DC. So, I went over and went to high school there and, up until this point, I'd been at an all-boys school wearing a uniform and I showed up at my first day of American high school and there were girls and it was casual clothes and the school was called Yorktown High but somebody had graffitid over the 'Y' and it said Dorktown High, which I thought was great. And basically what happened was that I met and fell in with a group of people who were real creative types and they were all into music and, you know, they thought differently about things and basically it changed the course of my life. I became far more interested in creative things and different ways of thinking … I actually ended up thinking a little too differently about things and my parents, who thought I was having a little too much fun, sent me back to an Australian boarding school, which is phase two of how I found myself getting into this stuff.

So, back at a boarding school, I'd gone from the most free, happy, stimulated, excited I'd ever been back to being with only boys in uniforms. It was a shock. But I had these two teachers. One taught me English and we studied Macbeth, Hamlet, then Proust and poetry like Eliot's 'The Love Song of J. Alfred Prufrock'. Then there was another teacher, who was also an English teacher, and he put on these shows. We didn't have a drama program but it just turned out that he was remarkably gifted at putting on theatre. It was always an enjoyable pursuit to find a deeper way of connecting to the human experience, even as a teenager. I really enjoyed that aspect - the way the arts make you think and engage with your life and the world around you.

And how did you end up making acting your profession, rather than another aspect of theatre or the arts?

Initially, I did a year at Flinders University and then I auditioned for the acting course at the Victorian College of the Arts [VCA]. But, really, if you're looking to work in that field of theatre or film, you might not really know how to do it, so studying anything can help guide you and be a model. I never really thought about acting being a singular vehicle for me creatively and, while I was at VCA, I didn't think I was that good at it, so I thought maybe I'll make theatre. It's really taken me until the last few years to really come back around to enjoying the process of acting. Towards the end of my studies I didn't feel that way. 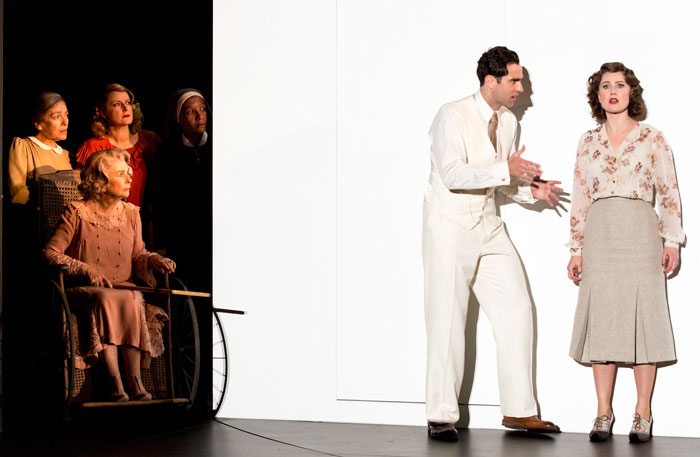 For me, I think there are two important collaborations rather than particular projects. First, my work with Simon [Stone] and The Hayloft Project, which was really our artistic adolescence. You know, I'm glad that none of us was getting any work at that time because it meant we could make the things we wanted to make. Working with Simon - they were great years of us exploring the possibilities of what theatre could do. And, the second important collaboration was working with The Black Lung, which was almost like being in a punk band attacking the limitations of theatre. In many respects, I feel like both those strands culminated in Thyestes [The Hayloft Project's production toured to Sydney Festival in 2012], which became, on the one hand, an exploration of retelling a classical text and, on the other hand, a vehicle for all this other stuff inside that needed to get out somehow.

Sydney audiences won't be that familiar with The Black Lung, so can you talk about the genesis of that group, what the binding agents were – my understanding is that you all had fairly different paths into the creative world.

First off, it was a collective of about seven young guys without any real professional prospects who all had similar influences musically and in film. When we looked at the main stage theatre in Melbourne, it didn't really have anything to do with us, so we got together and started making strange, crazy little shows in rooms above bars. I think one of the key aspects of what we did was to take anything sacred out of the experience – to turn it into a live exchange between the crowd and the performers. There was no fourth wall, there was no sense that this was real or even important, it was like an explosion of energy and sound and stupidity – and I mean that in a positive sense. It took its influences far more from music, like seeing a band, rather than historical theatrical traditions.

And how does your work with The Hayloft Project sit next to that?

I think my work with Simon and Hayloft was always an investigation of form and relevance. It was exploring ways to make works resonate again, which obviously Simon has become extremely successful at. While Black Lung was much more selfish, working with Hayloft was more of an intellectual pursuit in many ways and it was also in constant reference to what had come before. Black Lung was much more personal, much more adolescent. Not to say that it didn't touch something profound - both explored aspects that I think are really relevant.

Yes, that's right. With Hayloft there was always sort of an audience in mind. Whereas with Black Lung it was going to happen if one person showed up or six thousand and hopefully the show wouldn't change a lick regardless. 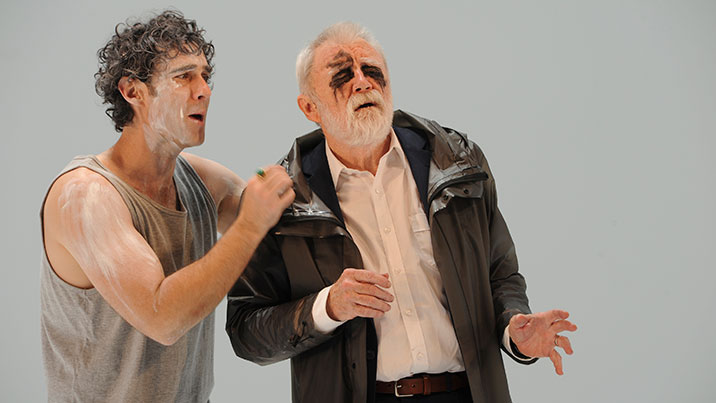 In terms of your acting work, in the past few years you've done more work in film and on TV. For you, is there an appreciable difference between working in theatre and working in film? Do you get different things from them?

I do, yeah. I've been more and more interested in screen and I think part of that has to do with film work coming and part of that has to do with just making so many theatre shows that you hit a point where you're like, 'OK I think I need to take a break from this for my own sanity'. And there is a nice thing about screen work which is it's an essentially private pursuit; it's an internal exploration that is shared between you and the camera and the other actor. That's the way films are set up and that's all that you are responsible for – there is something about that I really enjoy. Whereas with theatre we are responsible as a collective for the whole show and my background has been ensemble work where everyone is in equal parts responsible for the design as much as the writing as much as the directing. I think it will be different from this point on but that's been my background.

As you're saying, there can be a draining element to working in the independent theatre world especially. How do you find the creative energy again when you feel exhausted?

First, great material is energising. If you find great projects that explore interesting thoughts and ideas that aren't far from your own, you take a lot of energy from the fact that your voice and your subconscious thoughts are already engaged with what the project that you're working on is asking of you. So, the answer is to find material or people that keep you in an inspired or creative place. But basically, for me, I find there's a cycle of hermitage. When you work it's very public – you're around a lot of people and then performing in front of the camera or in front of a crowd. At the end of that, I find myself going into a three-week, four-week hermitage where I'll sit on my couch and watch every season of The Sopranos again and just reboot. That's if you have the luxury of a little time off. When  you're working, you're very out there, in people's gaze, so without it being a conscious process, I just end up becoming a strange hermit for a few weeks, sleeping on the couch watching Tony Soprano. 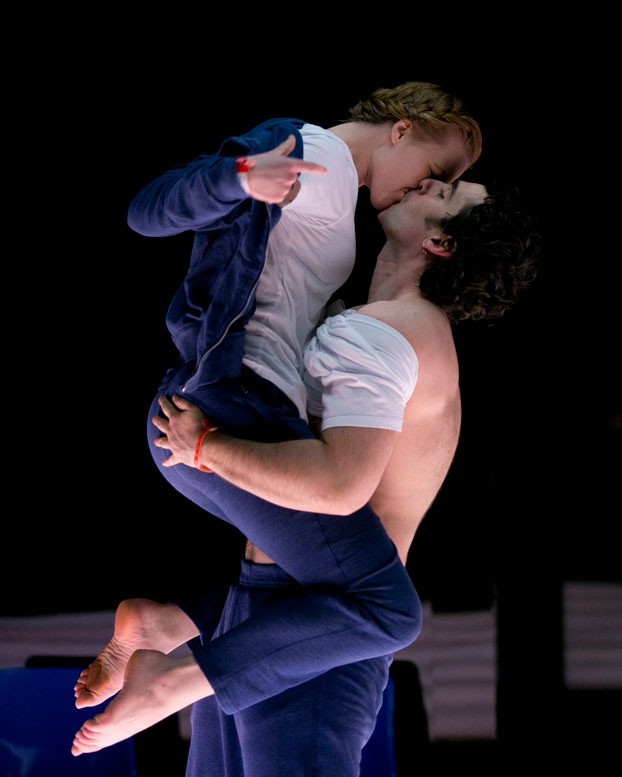 Above: Anna McGahan and Mark Leonard Winter in The Effect. (Photo: Lisa Tomasetti)

Recently, you've spent more time in L.A.; what is that like for you? Is that a world that you find powerful or interesting?

Look, the reason I go is I want to get my hands on the material. The American film and television scene – I mean obviously there's a lot of crap – but there's some really great writers. My experience of L.A. is that I always feel like a fish out of water. I don't feel like I fit into that model at this stage, frankly. So, I'm always pleased to leave and I won't make that trip again. I really resent the feeling that, if you're not travelling with a film or a project that resonates with Americans, the sensation that starts to creep in is that you're trying to win the lottery. I'm just not interested in that way of existing, so at the end of this last trip when I was broke and on the plane coming home I just went 'I'm never gonna make that trip again'. I want to keep being creative and have to trust that a bigger plan will emerge if I keep finding the projects that speak to me and people who I want to work with and let the rest of it take care of itself. In my opinion, life's too short to hang around L.A. being a bum.

Seeing the show? Let us know your thoughts. Tag @sydneytheatreco and #STCChimerica