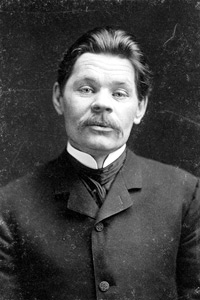 What is it about the Russian writers I wonder?

Extremity, complexity, brutality, optimism. But not blind optimism, an optimism despite the obvious impossibility of salvation.

There is such a flowering of great literature in the hundred years around the revolution. Such a need to tell the story, be it in novel, play or short form. This need to tell, to examine and investigate the dynamics of their society fills Russian writing with purpose and vitality. They are literally making it up as they go along. The spirit of theatre, it seems, makes it particularly amenable to this energy: improvising, knocking together, throwing it on - because the spirit of theatre is all about the present. Theatre, like life, happens now and is gone. Because of this essential immediacy, theatre at its best is a forum. It is a place to table observations, criticisms and ambitions for one's society. To enact the good, the bad and the probable. Before they happen sometimes, or after they have happened more often than not. This theatrical heritage, theatre's critical role in the formation and elaboration of society, is lucidly manifested in the work of Gorky before the revolution.

Children of the Sun is a remarkable document, on so many levels. It captures the urge and the pressure for change before that urge has been colonized by ideology. Before it has been politicized and made accurate or dangerous (depending on your persuasion) by Marxism and historical materialism. This inchoate quality of the pre-revolutionary energy is harnessed by Gorky to drive the chaos and disorder of the plot. To illuminate the ignorance and bigotry of the characters. To reveal the crack in the world that will, in time, settle for the glue of ideology.

Whenever an adaptation is undertaken, a specific production is begun. It is important to find the angle on the story that resonates with the day and age. The time and the place in which the show will be seen. It is not for an adaptation to seek to replace the original or improve on it, it is to bring it alive for now. There are myriad ways to translate a line of dialogue and there are exponentially more ways to adapt a scene. Some writers are very scrupulous and particular about their structure and their rhythms. Others are fired by a need to tell the story and there is a massive outpouring of scenarios. Gorky is very much the latter type of writer, he just opens the nozzle on his ideas, his themes and his situations and lets it all come streaming out. His theatre is raw and immediate and was very, very topical at the time. There are bumps and dips that (in some instances) are best smoothed over.

The choices we make for our production are going to be very different from the choices made next timeChildren of the Sunis programmed. There is a sense that these can be new(ish) plays, perpetually reinvented and reinvigorated for a new audience and a new time. Their historical setting can become another, a new tool in their resonating arsenal. History is a mirror that can fill us with a sense of continuity, an insight into our patterns as a species and a reminder of where things went wrong and how much they have changed... or not. History places us in relation to the work. We know the Russian turmoil did eventually find a revolutionary direction, take shape, get commandeered.

We know that the commandeering comrades kept a tight hold on their new power and we know that power is never easily relinquished. It is with our eye firmly on the present that this particular excursion to the past makes the most sense. With the benefit of hindsight we know the glue of ideology these folk will resort to (not necessarily voluntarily in all cases). We know the mess they will make trying to fix it up with all-encompassing historical solutions and ideological certainty.

In this way the lumpy nature of Gorky's narrative voice lends itself to new productions, enjoys a bit of anachronism and misrepresentation. The original still stands. There are many literary, historically devout translations to be found; Gorky's work in fact remains untouched.

The setting of the play is typically bourgeois, a group of over-indulged kidults, still living with their Nanny, circle around their destiny in seemingly futile conversational eddies until it comes and clobbers them. But these characters are remarkable creations: Protasov, the chemist whose prescience about the role of science in the future - especially his beloved chemistry - is spot on. His sister, Liza, whose anguish about the state of the world has set her right on edge, but once again her prescience and insight are bewilderingly accurate. And Yelena: his wife who knows there is something wrong, who senses the need for action and who just may be the very embodiment of the revolutionary spirit. Their friends, acquaintances, would-be lovers and the burgeoning peasant class who are all desperate for some new world order, or just some personal identity aside from the cloying drudgery of history. All these folk, fully formed and lovingly detailed, crash and collide into each other. And none of them knows exactly how to hold the whole picture together, but all have at least one piece of the puzzle in their grasp. From this naive energy Gorky has wrought the great drama that the inchoate offers any writer of character. People are so much more interesting and volatile when they know they want something but don't know what it is. This incredible volatility and desperate searching blows the typical setting apart and gives the play its most modern resonances.

The horror is behind us, on the horizon.