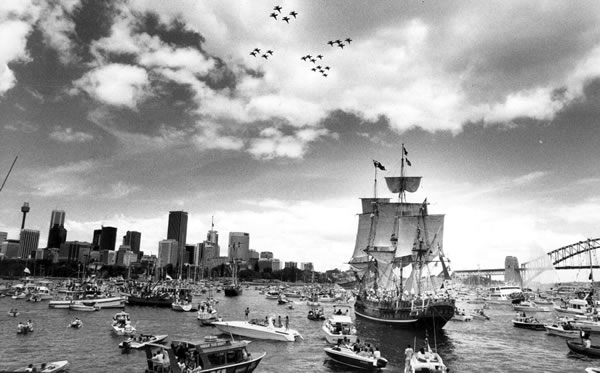 After Dinner premiered at Melbourne’s legendary La Mama in 1988. Bob ("any boss who sacks a worker for not turning up today is a bum") Hawke is Prime Minister, and the year opens with a celebration of the Bicentenary of the commencement of European settlement. Sydney Harbour is lined with two million people cheering on the Tall Ships, while thousands more gather at Lady Macquarie’s Point, Bondi Pavilion and Belmore park in protest. The banners read "White Australia has a Black History – Don’t Celebrate 1988" and "Australia Day = Invasion Day 1988". We are eight years into the AIDS crisis and deep inside the Reagan/Thatcher era. On the other side of the Iron Curtain, the Solidarity movement is gaining an ever-stronger foothold in Poland and the world is on the brink of change. In 18 months, Chinese students will stand in front of tanks in Tiananmen Square, signaling the beginning of the "New China", and the Monday Demonstrations in Leipzig will begin. In just under two years, the Berlin wall will be torn down and the Soviet Union will be gone. We are two years away from the "recession we had to have", three from the accession of Paul Keating and four from his landmark Redfern speech.

I cannot have been the only person wandering the streets of Sydney on January 26, 1988, self-consciously ping-ponging between beers on the harbour and demonstrations in the city, wondering which celebration to join and feeling vaguely uncomfortable at both. It gives me no pleasure to admit to that, and it is a matter of great shame to me now that I knew so little of the actual history of Australia, raised as I was on the stories of Bourke and Wills, late-modern European history and a vague notion that Indigenous culture was a continuation of the Stone Age. But then again, that’s what we were taught. The expansion of the cultural story of Australia in the ensuing 27 years has irrevocably changed and deepened our sense of self; it has exposed our prejudices and our racism and, like an archeological dig, Andrew Bovell’s plays chronicle that remarkable journey, from After Dinner's satirical take on the introspective white middle class of the 1980s, to the sweeping historico-political epic, The Secret River. In his inspirational keynote address for Playwriting Australia early in 2014, Bovell said of the times we live in:

At this moment in our history I find myself hungry for content […] For plays that are saying something. I want meat on the bone. I want to think. I want to be upset. I want to be shocked and shaken. I sense a rise of conservatism in this country. A narrowing of opportunity. A widening of the gap between rich and poor. Between black and white. A meanness of spirit has crept in to the social discourse. I want to challenge it. I want to get in its way.

This political voice, this passionate view about the role of art, is a hallmark of Bovell’s writing. At first glance, one might view After Dinner as a boulevard comedy: a group of 30-something ‘singletons’ out on a Friday night looking for – variously – sex, emotional contact and/or solace, but its political subtext articulates something far more profound. Just as Williamson’s Don’s Party expressed the strident political mood of the boomer generation that swept Gough Whitlam to power, thus fundamentally altering Australian political and cultural life, so After Dinner articulates the quicksand of 1980s mainstream Australian social and political identity. In popular culture, the 80s are largely remembered for fabulous pop music, outrageous clothes, designer drugs and raging corporate greed, but cultural theory tells a different story. The HIV/AIDS epidemic wrought an enormous change in the western world, not just because it challenged the growing sense of sexual freedom and power of the 1970s, but also because it reminded us of how frail we are; how fundamentally unable we are to control the planet. Science, which had so confidently landed us on the moon and wiped out polio, started to seem shaky, hyper-politicised and vulnerable to failure. And into that crack crept the great theorists of the 1980s: Noam Chomsky’s Manufacturing Consent (also released in 1988) took cultural theory into the mainstream, and the postmodernists and poststructuralists – Foucault, Derrida, Barthes, Irigaray et al – started to be widely read.

This is the quicksand.

This is a short extract from a longer essay published in the program for After Dinner, available at the theatre for $10. With a range of fascinating articles and rehearsal room photographs, the After Dinner program is a magnificent way to extend and deepen your night at the theatre.