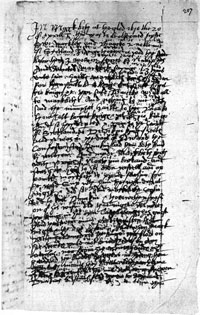 There are very few extant records of Shakespeare’s plays in performance from when he was alive and involved in his own productions. One of the only preserved eyewitness accounts comes from Simon Forman’s The Book of Plays, originally titled The Bocke of Plaies and Notes therof p formans for Common Pollicie. Written between 1610-1611, it includes a description of one of the earliest known performances of Macbeth. Having long been suspected as a work of forgery, The Book of Plays is now generally accepted as an authentic document. The author, Simon Forman, is himself a remarkable character – an astrologer, physician, philanderer, occultist and diarist.

In Macbeth at the Globe, 1610, the 20 of April, Saturday, there was to be observed, first, how Macbeth and Banquo, two noble men of Scotland, riding through a wood, there stood before them three women fairies or nymphs, and saluted Macbeth, saying three times unto him, “Hail, Macbeth, King of Codon; for thou shall be a King, but shall beget no kings,” etc. Then said Banquo, “what all to Macbeth, and nothing to me?” “Yes”, said the nymphs, “hail to thee, Banquo, thou shall beget kings, yet be no king”; and so they departed and came to the country of Scotland to Duncan, King of Scots and it was in the days of Edward the Confessor. And Duncan had them both kindly welcome, and made Macbeth forthwith Prince of Northumberland, and sent him home to his own castle, and appointed Macbeth to provide for him, for he would sup with him the next day at night, and did so.

And Macbeth contrived to kill Duncan and through the persuasion of his wife did that night murder the King in his own castle, being his guest; and there were many prodigies seen that night and the day before. And when Macbeth had murdered the king, the blood on his hands could not be washed off by any means, nor from his wives hands, which handed the bloody daggers in hiding them, which by means they became both much amazed and affronted. The murder being known, Duncan’s two sons fled, the one to England, the other to Wales, to save themselves. They being fled, they were supposed guilty of the murder of their father, which was nothing so.

Then was Macbeth crowned king; and then he, for fear of Banquo, his old companion, that he should beget kings but be no king himself, he contrived the death of Banquo, and caused him to be murdered on his way as he rode. The next night, being at supper with his noble men whom he had to bid to a feast, to which also Banquo should have come, he began to speak of noble Banquo, and to wish that he were there. And as he did thus, standing up to drink a carouse to him, the ghost of Banquo came and sat down in his chair behind him. And he, turning about to sit down again, saw the ghost of Banquo, which fronted him so, that he fell into a great passion of fear and fury, uttering many words about his murder, by which, when they heard that Banquo was murdered, they suspected Macbeth. Then Macduff fled to England to the kings son, and soon they raised an army and came to Scotland, and at Dunston Anyse overthrew Macbeth. In the meantime, while Macduff was in England, Macbeth slew Macduff’s wife and children, and after in the battle Macduff slew Macbeth. Observe also how Macbeth’s queen did rise in the night in her sleep, and walked and talked and confessed all, and the doctor noted her words.