Michael Scott-Mitchell has a long and acclaimed history with Sydney Theatre Company. In between designs for theatre and opera he also works as an architect on jobs including the Rockpool restaurant, and as Head of Design at NIDA. Our Content Manager, Carl Nilsson-Polias, chatted to him on a break from rehearsals at the Sydney Opera House to discuss his work on Switzerland.

Is the set you've designed for Switzerland based on Patricia Highsmith’s actual home?

Yes, it's largely based on the house that she had built in Tegna. But I've incorporated a couple of elements from another house that she lived in, particularly the ceiling. The thing that both these houses had in common was very thick walls and small square windows, which is where that element has come from.

For her final home, she commissioned an architect and what I found fascinating was that the exterior is this very brutal and foreboding white brick, like a fortress, and yet inside it's surprisingly comfortable and lived-in – very human and delightfully eccentric. Looking at the interiors, you get a great sense of the woman who lived there. And her very eclectic collection of furniture and memorabilia.

It reminded me of a particular aesthetic and a particular group of people that I’m familiar with, partly my own family. My parents retired to a house overlooking Kangaroo Valley that felt similar to Highsmith’s house. Quarry tiles, lots of books and artworks and sculptures. It also reminded me of a home I visited as a child – that of the potter Margaret Tuckson and her husband Tony Tuckson, one of my favourite Australian painters. I guess there was a particular Australian aesthetic that I saw a commonality with – these whitewashed dwellings, with dark wood accents in beautiful bush settings full of timber furniture and artworks and rugs. Joining the dots to people I knew who were artists was a way in for me, a way to get inside Highsmith’s head.

Like the difference between the inside and outside of Highsmith’s house, I think one of the tensions in this production is that, while the room is quite inviting, with a fireplace and comfortable cushions, the counterpoint to this warmth and humanity is that Patricia as a character is aggressive and goes on the attack from the moment Edward arrives. So, we're playing off the fact that it needs to be unsettling. It would be great if the audience were wooed into a comfortable place, but quite uncomfortable things happen in that space. And, while it appears to be a perfectly naturalistic space, everything is actually slightly tilted and there isn't a right-angle in the room, which I'm hoping will be slightly unsettling in itself. People might not be able to put their finger on why it's unsettling but there’ll be something that automatically doesn't feel quite right.

In terms of Highsmith’s home and the other ones you mentioned, it strikes me that we're discussing a type of house that is often situated in the landscape, outside of towns. These are houses that are suggestive of a desire for solitude, not just in Highsmith’s case, but something perhaps in the artistic sensibility – a need for a discrete personal space in which to be creative. Is there a challenge in a design like this, where you're shaping a space that is lived in by one person, Patricia, but that is then occupied by a second person, Edward. What are some of the dynamics in the space that you've looked at in terms of the tension between the two characters?

The dynamic of the space is deliberately skewed towards her desk. From above, the set is in a V-shape and the V pushes towards the desk, which sits at one side of the stage. From the desk, the room expands quite radically out. So, one end of the room is very deep, while the other end (where the desk is) is incredibly shallow. In terms of how the dynamics work within the space, the desk is Patricia's domain and Edward is the intruder entering the space, which he does from the deep side. He stands, hovering within that deeper area, trying to negotiate his way towards the desk. That spatial dynamic is incredibly important.

There's a kind of neutral space around the fireplace and there's a section of the play where they settle into a dialogue in that area, but, when the stakes are heightened, they tend to gravitate more towards using the whole breadth of the room. That's one of the characteristics of the Drama Theatre – it's a very wide, low space. And I've deliberately compressed the space as well by bringing down the ceiling level, to emphasise that slightly discomfiting feeling we were talking about.

Can you talk about the challenges of this set? In terms of lighting, having a ceiling in place must have thrown up some difficulties for [Lighting Designer] Nick Schlieper. What have the solutions been?

It was a very tricky thing to throw to Nick. Counting back, we've done over 60 shows together, so we've been in and out of each other's pockets for many years. I mean, he's practically family. And it was a really tough call to stick a lid on the whole thing, because it makes it very hard for him. But we've managed to tackle it in a number of ways, largely by hiding lights throughout the space. So, we have lights in two of the brick columns that are part of the set – what look like brick columns are actually hollow with no upstage side to them. And, for various fire safety reasons, we have to provide plenty of airflow, so we cut off the back of the ceiling, which means that the back wall appears to lead up towards a clerestory space and Nick has been able to use that area for a battery of lights. There are also beams that support the roof that are, again, hollowed out with lights hidden within them. So, it's been about finding nooks and crannies for Nick to put his instruments in. 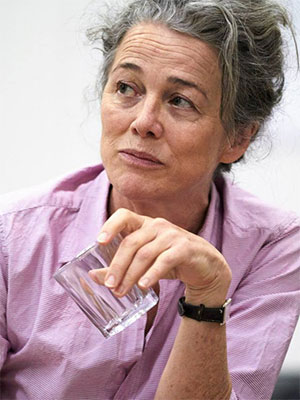 What are some of the elements of Patricia Highsmith's character that you were particularly interested in bringing out in your design?

Well, actor Sarah Peirse is an incredibly elegant and beautiful woman. So, I'm working hard to make her look a little rough around the edges. Highsmith was a very beautiful young woman but she lived a tough life in terms of how she looked after herself. She basically lived on whisky and cigarettes, so by the end of her life she was reasonably haggard.

She also had a very masculine approach to her attire – trousers and men's shirts – and she had a fairly brutal haircut – just very practically chopped hair. So we've had a wig made for Sarah, which is looking terrific and really helping to bring some of that roughness to her look. And, of course, Sarah has these wonderful cheekbones and it's really very hard to not make her look beautiful but we've been exploring stippling her face with makeup so that her skin has a slightly textured, pocked look to it.

The thing for all of us that we're trying to find in Switzerland is the complexity of Patricia's personality – the way in which she could be a good friend as well as a prickly person. So, it's important that we see in the play Patricia's tougher side and yet also what puts her at ease. Her home is her cocoon, a home that she built for herself, which was quite a comfortable place to be in. Yet she acts so aggressively. The two aspects are counterintuitive in some ways – opposing forces in the design. However, I think the key to resolving these in the play is that when Edward enters, he is seen to be invading what is essentially Patricia's nest. The place where she writes, where she feels most comfortable.

The story that I most love about Highsmith is one in which she goes to a party with a handbag full of two hundred snails and, when somebody asked her why she brought them, she said, "Well, to ensure that I at least had some good company tonight." She was clearly an amazing character in every sense and it would have been fascinating to have met her ... if you didn't get booted out of the house after 10 seconds.