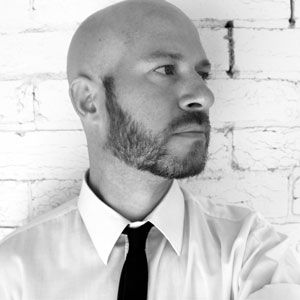 If you were lucky enough to see Kip Williams' production of Caryl Churchill's Love and Information in 2015, you might recall the heartbreaking scene in which actor Marco Chiappi sat down to play a piano. Composer and sound designer THE SWEATS, aka Pete Goodwin, was the man behind that stirring music.

Love and Information marked Pete's Sydney Theatre Company debut. In 2017, he returns to add his musical stamp to Chimerica and Three Sisters, both directed by Kip Williams. And, in 2018, he'll be working on Michele Lee's new play Going Down.

Pete has been making music and sound for theatre for over 15 years, with credits at Belvoir, Melbourne Theatre Company, Queensland Theatre Company and Sydney Opera House. Here, he shares some of his favourite tracks for you to listen to and writes about their genesis.

This is the rehearsal version of 'Piano' from Love and Information, with me playing a grand piano set up in the board room of Malthouse Theatre, featuring Zahra Newman and myself on vocals. Ursula Yovich went on to sing the alto line with Zahra live on stage each performance, with Marco Chiappi miming along to my piano recording. The melody from the composition is the same as that in 'Love' (the next track), and is written in a time signature of 7/8 – a little nod to Caryl Churchill's obsession with the number seven throughout her play.

About four weeks before the start of rehearsals for Love and Information, I wrote a suite of musical ideas in response to Churchill's script. At the time, I didn't know how (or even if) these would be used in the play exactly, but out came six different pieces of music in differing styles and moods. Each of these six ideas ended up in Kip's production of Love and Information, in some form at least. This composition, entitled 'Love', became the main theme and was used in several variations across the seven sections of the play, underscoring the scenes STONE and GENES.

The day Love and Information opened in Melbourne, I started rehearsals of the MTC/STC co-production of Death and the Maiden. This score features some obligatory music by Schubert, and a sub-heavy 'thriller' score produced and performed by me. This is a taste of one of the scene change compositions.

While STC/QTC staged a production of Lucy Prebble's The Effect in 2014, down the road in Melbourne, MTC also staged the play, with Sigrid Thornton and William McInnes. In this sequence, two participants enter a drug trial and have all their blood work and vital statistics taken. All the little bleeps and noises were synced to multimedia projections by Chris More, and all the percussion parts in the track were made from laboratory recordings – heartbeats, ECG monitors, MRI sounds and centrifuges for spinning blood samples.

Nick Payne's exploration of string theory in MTC's 2013 production of Constellations inspired this piece made from string loops and random 'chance' procedures in Ableton Live (music software). I think it's one of my favourite scores to date.