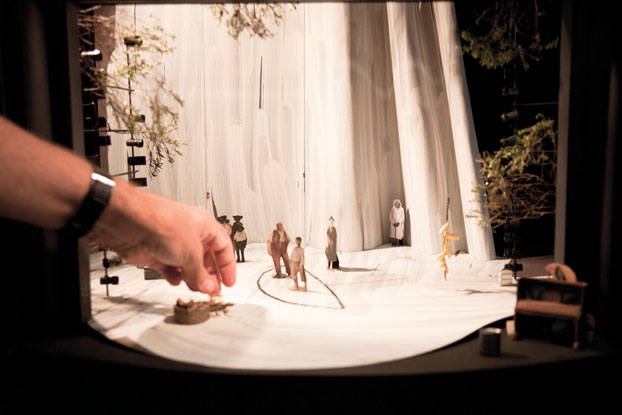 Stephen Curtis, who has created the stunning set for The Secret River, writes about the landscape that inspired his design.

In some ways, I feel as though I have been preparing for this production for 30 years or more. Neil and I started working together in 1982, and I have been living on the Hawkesbury River, where this story is set, for a bit longer than that. The world of the river is deeply ingrained in me.

It is a spectacularly beautiful landscape. I have no difficulty understanding why Thornhill would fall in love with it and want to make it his, and the middens and rock engravings – images of fish, wallabies, men and women that are everywhere in the valley – are a testament to how the Dhurug made it theirs.

The place is such an important part of this story, and I suppose I have seen my task to give the audience some experience of that beauty and wonder without trying to literally describe it. I took my cue from Kate Grenville's Thornhill who on his first night on the Hawkesbury compares it to his experience of a church: "... so big it made his eyes water. He was dizzy, lost in panic... it was a void into which his very being expanded without finding a boundary, all in the merciless light that blasted down..."

From the earliest days of our script workshops I started to imagine a clear light-filled space that extended high out of view; a space in which our Aboriginal family would stand out boldly, and into which our settler family would tread muddy footprints like careless children; a space in which pictures could be drawn as part of the storytelling and the two families could play and play out this wonderful complex and tragic story.