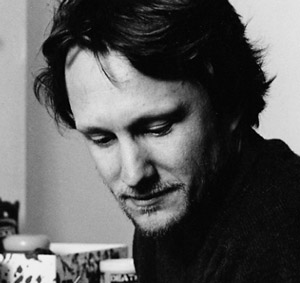 Golem premiered at the Salzburg Festival, where the festival's Curator David Tushingham spoke with 1927's Paul Barritt – creator of Golem's film, animation and design components. Here's what he had to say...

David: Your previous theatre show, The Animals and Children Took to the Streets, was a big success and toured to a wide range of countries.  Of all the places you visited, which ones made the strongest impression on you and how did these experiences feed into the making of Golem?

Paul: Some of the places that have made the strongest impact upon us have been LA (much of the city backgrounds have been drawn from photos I took of downtown LA), Moscow, China, Nigeria. Also Middle England. And of course London. London is always the main source as it’s where we live. I watched the Olympic village being built literally across the river from my studio. This is undoubtedly one of the most pronounced visions of the corporate future to be seen in Europe. It was developed from a wonderful wasteland upon which all kinds of life thrived, both human and animal, to a desolate space filled with shopping malls, sports stadia, well-trimmed lawns, high visibility vests (the building work will never end, it’s not in anyone's interest for it to end, just keep building, keep on developing, extend the contract ad infinitum), security guards…

Ironically we rehearsed the show partly in south London and had to travel through North Greenwich every day, which meant passing by one of the greatest corporate follies of the late 20th century, the "Dome". So from one corporate vision of the future to the next. Cable cars, glassy fronted buildings, more building work (started in the 1990s and still building, building, building), giant DIY stores, stationery stores, supermarkets, restaurant chains, large screen monitors everywhere…

Paul: Meyrink was really into Dickens so, whilst Der Golem is a kind of mystical, hallucinogenic thriller, it also contains social realist elements. The descriptions of the Jewish ghetto for example were probably fairly true to life, possibly even some of the characters therein. Also the Marionette men, I think Meyrink used to hang out with characters like that all the time. If there is one part of his book that has ended up in our show it’s that social comment aspect. The rest of it, whilst it was certainly a springboard into the idea of doing the Golem myth, was dismissed fairly early on.

David: The city where Golem is set is not identified but its grottiness appears to be celebrated with great enthusiasm.  Is this the way you feel about living in London?

David: What were your other sources of inspiration while you were developing the show?

Paul: There were many sources of inspiration, from Polish animations to Bernard Stiegler to Ludwig van Beethoven.

David: In your portrayal of the workplace and of the attractions of golems as labour-saving devices, work seems to be something best avoided. But I know you all work very hard. How do you explain this contradiction?

Paul: This theme has been slightly misread. What we are actually saying in the show is that golems don’t really save labour, they just shift labour into a different position. This position is often more mundane than before and much more managerial in nature. The argument you mention comes from another great Czech work R.U.R, a 1920 science fiction play about robots (it claims to be the first work to actually coin the term robot).The argument goes: one day mankind will never have to work, robots will do everything and we will be left to think and create and better ourselves. It is used by the corporation to persuade the maker of golems into selling up. It is both idealistic and unrealistic. It is, however, a stance that unfortunately can underlie the continual progression of the technological sciences. There is a belief that through technology we will build a better world, that there is some kind of Star Trek-esque utopia of technological comfort awaiting us, provided we carry on developing new and improved means in which to make life easier. Our golem maker is an idealist and is sold that ideology.

David: The show presents us at the beginning with golems as rather charming things created by an artist and inventor and in the course of the story they turn into commercially-driven agents of rampant consumerism. Does this mean your basic narrative is that any decent idea will inevitably be ruined by capitalism?

David: The show includes a punk band made up of economic underachievers who are so lacking in self-confidence that they cannot declare their love for each other. Are these the characters with whom you identify most?

Paul: These characters are representative of a politically impotent generation, in other words our generation and all of those that are growing up behind us. Everyone can see what is wrong with the world. It is not a difficult thing to pick apart the problems with the way industrialised consumer driven democracy doesn’t work, what is difficult is finding a solution. Something that generations of people brought up on the sickly sweet heroin of market driven popular culture are finding impossible to even comprehend, let alone do anything about. So yes we do identify with them. And what are we doing? Making a theatre show about it that will be viewed by a, relatively speaking, elite class of wealthy consumers… I rest my case…