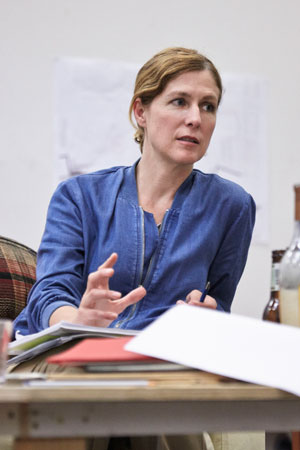 Ayad Akhtar's play, Disgraced, has won the Pultizer Prize and been a hit on Broadway. Why do you think it's captured people's imaginations the way it has?

I think it's because of the power of the writing and the tension in the writing. The central argument in the play essentially takes place over dinner between four characters and each of those characters argues their corner really effectively. You're never sure exactly who's the most convincing. It's like a chamber music piece with four totally different instruments playing.

You know, sometimes a writer comes out and just nails an argument that everyone's been circling for a long time. In terms of the politics of identity, in terms of Islam as a religion and a culture, in terms of how art can empower or exploit, in terms of how secular and liberal ideals butt up against history and tradition.

Also, I read somewhere a comparison of Disgraced with Greek tragedy – in the sense that it explores how you can't outrun your past. It actually reminds me in a way of Who's Afraid of Virginia Woolf?. So, it's got these great traditional theatrical elements to it. You get sucked right into these characters' internal conflicts.

It's set in New York. It feels like a post-9/11 piece. Is this a very contemporary story or what are timeless ideas it's examining?

Well, I think it's about questions of identity and what we believe in and where we belong. How your beliefs form your identity. And it looks at the idea of keeping church and state separate as this crucial part of Western liberal ideology, but asks whether that's really possible.

In our times, we talk about the death of religion as a guiding force in Western society, but we've seen the rise of fundamentalism. For some people, pinning your identity to a set of beliefs and a cause to fight for, particularly young men, creates a sense of belonging that was presumably lacking beforehand.

It is also about what it was like for American Muslims in post-9/11 America. Being demonised, being labelled so clearly as 'The Other'. We're still growing to understand the consequences of that. The central character in the play, Amir Kapoor, rejects his Muslim background. But it's interesting to consider a society constantly demonising and excluding Muslims, and how that affects someone like him internally.

The writer, Ayad Akthar, has taken all these big ideas that a lot of people have been circling – putting them all together in a pressure cooker play.

Picking up on this character of Amir Kapoor… the actor Sachin Joab who plays him will be making his STC debut in the role. Have you worked with him before?

No, but he's a very talented actor. He came in for an audition and he was absolutely terrific. Since then we've caught up to get to know each other a bit and had these amazing conversations about his background, his insights into Muslim culture, and he brings his own personal history, which I'll let him tell himself, but it's really extraordinary.

The rest of the cast are these great theatre animals like Paula Arundell, Glenn Hazeldine, Sophie Ross and Shiv Palekar – a young guy who's just come out of NIDA. So, I think it'll be a really good dynamic of people pushing up against each other.