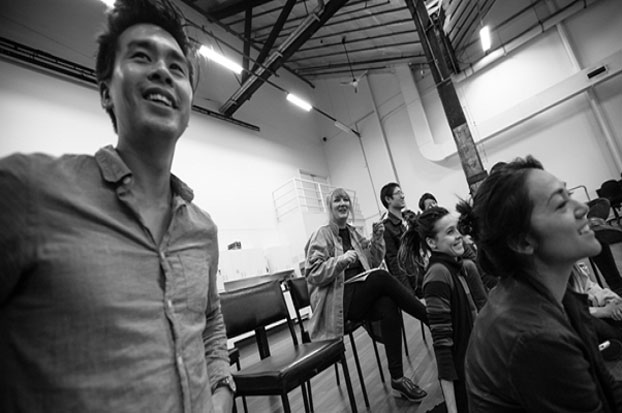 Recently Performance 4a and Sydney Theatre Company teamed up to address a significant issue – the shortage of trained theatre directors of Asian Australian background.

STC hosted a week-long introduction to directing workshop, led by the STC’s Richard Wherrett Fellow, Paige Rattray, for 15 members of Performance 4a’s network of Asian Australian artists. The participants all had an existing practice as actors, playwrights or filmmakers. The week culminated in a Longhouse facilitated discussion where workshop participants shared their experiences with an expert panel who were asked to address the question of why there are so few Asian Australian directors, should it be of concern, and does it influence the type of work on our stages.

Workshop participant, John Ma, said, “Starting from the creation stage of my work, I could never find the crucial motivation to write about my experiences and history as an Asian person growing up because doubt always crept inside my head when I wanted to write about my personal stories.” But following the workshops and panel discussion he now says, “Having sat in a room full of my contemporaries, I feel a warmth that I've never felt before. Not just in a sense of solidarity, but in practicality, because now I know if I write something that is indicative of my experience through my life's lens, that there are people who are just like me that can help me make it come true.”

On the panel were Egil Kipste, Head of Directing at NIDA, Kip Williams, Interim Artistic Director at STC and Paige Rattray. The discussion was facilitated by Tessa Leong, Longhouse Coordinator, Director and Dramaturg. Following the panel discussion John said, “By having a constant flow of these talent nurturing efforts of workshops, mentorships or residencies, it not only gives the participants something tangible to grab onto that allows them to build real world knowledge, but it also provides networking opportunities.”

Performance 4a’s Executive Producer Annette Shun Wah said, “This exciting partnership with STC has provided invaluable experience and inspiration for artists who aspire to engage with main stage theatre, but are discouraged by the perceived lack of opportunities for people of culturally diverse backgrounds. The workshop identified strong directing potential that we hope to nurture, much in the way that our Lotus Playwriting Program with PWA has nurtured a new generation of Asian Australian playwrights. I hope this is the beginning of an ongoing partnership with STC.”

Performance 4a is a Sydney-based performing arts organisation making exceptional work to express the contemporary Asian Australian experience. It leads in developing, nurturing and championing artists of Asian background to take their place on main stages. The Longhouse is Performance 4a's networking and information sharing program aimed at building a resilient Asian Australian performance community.

Noting that the workshop was oversubscribed, Paige Ratrray said that she hoped to explore the issues raised again and that, in the future, the event could be extended to other interested groups.

This article was originally published by AMPAG and is reproduced with permission.