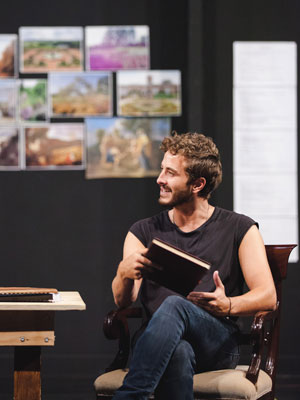 Arcadia is set in Sidley Park, Derbyshire, in an English country house. Its surrounding gardens are about to be restyled in the “picturesque” Gothic style.

The play is set across two time periods: the early years of the 19th century and the present day. The action begins in 1809, with Thomasina Coverly, the 13-year-old daughter of the house, and her 22-year-old tutor, Septimus Hodge. Ezra Chater, a poet and house guest at Sidley Park, accuses Septimus of sleeping with his wife.

Some two hundred years later, historian Hannah Jarvis and professor of literature Bernard Nightingale meet in the same room of Sidley Park in which the previous scenes took place. Hannah is there to investigate a hermit who once lived on the estate. Bernard is trying to uncover a mysterious chapter in the life of the poet Lord Byron. The characters in the present day puzzle over artefacts left by those in the 19th century.

In the present day, Bernard rehearses a speech on his theory that Lord Byron murdered Ezra Chater. In 1809, early in the morning, Septimus returns from shooting rabbits to a proposition from Lady Croom, Thomasina’s mother.

The shifts in time begin to speed up and intersect. To confuse the matter, the present-day characters play dress-ups with costumes from the earlier period. The time period of the past jumps forward a few years to 1812, Thomasina is now 16.

As the characters in the present day continue their research and history takes its course, the revelations come thick and fast.

This synopsis is part of the Arcadia program, which also features:

Seeing the show? Let us know your thoughts. Tag @sydneytheatreco and #STCArcadia