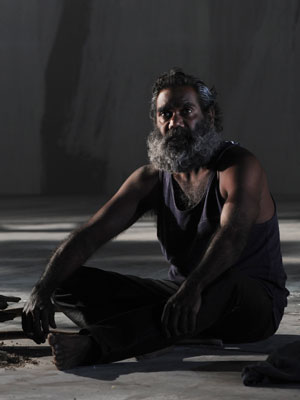 The play is set on the Hawkesbury River, between September 1813 and April 1814. The Dharug people who lived there at this time knew the river as Dhirrumbim.

William Thornhill is an English boatman. Having committed a crime of petty theft, he and his wife Sal and two sons, Willie and Dick have been transported to Australia.

The Thornhills set up camp along the Hawkesbury and encounter the Dharug family who live there. Tensions between the two families escalate around access to the land.

The Thornhill and Dharug children become friends and play with one another. Sal reveals she is pregnant. William purchases a rifle.

William gives his son Dick a beating for swimming with the Dharug children.

Tensions increase. William visits the camp of Smasher Sullivan to buy dogs. He finds that Smasher has a Dharug woman held against her will.

Violence breaks out repeatedly on both sides. Smasher urges an attack on the Dharug’s camp. William agrees.

Ten years later. Ngalamalum, the one survivor of the massacre, meets William on the same spot by the Hawkesbury.

This synopsis is part of The Secret River program, which also features:

Seeing the show? Let us know your thoughts. Tag @sydneytheatreco and #STCSecretRiver